The World of Remnant: Solitas

Remnant is a harsh landscape inhabited by the Creatures of Grimm that dominate the skies, land and oceans. There were once many kingdoms scattered across the continents of Sanus, Solitas and Anima. However, most have fallen to the Grimm, leaving behind only four survivors. By combining technological advancement with local topography, civilisation flourishes within the protected boundaries of these four kingdoms.

Solitas is the most northerly continent, a harsh, ice-cold environment that both humans and Grimm find difficult to cope with. As a result of the inhospitable conditions, human civilisation and technological understanding has advanced swiftly and the continent boasts the youngest kingdom in the world, the Kingdom of Atlas, which was created out of the more ancient Kingdom of Mantle.

The Kingdom of Atlas is located in the south of Solitas and to the north-east of the old Kingdom of Mantle.

Now Atlas floats above the icy surface of Solitas, a gleaming jewel in the sky that is nicknamed 'the City of Dreams'. Meanwhile, Mantle remains grounded in the ruins of the old kingdom and wreathed by the smoke of the mines Atlas left behind. Broken and impoverished, Mantle has become increasingly resentful of the luxury it provides for Atlas but isn't allowed to share. 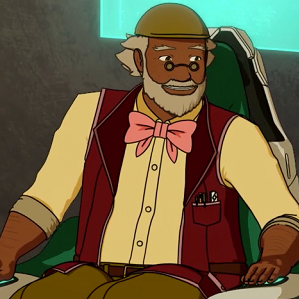 "I feel like such a dunce for not recognizing you sooner. My daughter’s told me so much about you."

One of Ironwood's most trusted and respected scientists, Dr. Pietro Polendina is an elderly engineer. In addition to working for the Atlesian military, Pietro volunteers at a pharmacy in Mantle.

Originally known as Alsius Academy until the Great War transformed it into an R&D facility and military HQ, the current academy is more militarized than the rest of Remnant would like to see. 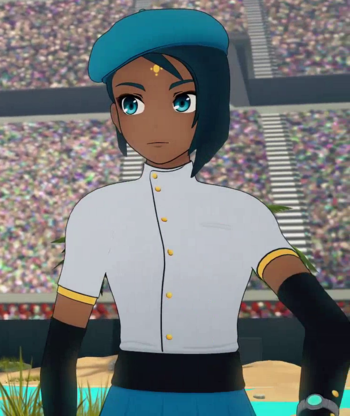 "It's been precisely one minute, ma'am."

Penny's partner in the tournament, a stiff and no-nonsense Atlesian cadet who follows orders to the letter.

A rival team from Atlas that Weiss and Yang battle in the second round of the Vytal Festival Tournament. Despite originating from the usually strict and militant Atlas, their members are a bit... unorthodox. Their team name is pronounced 'funky'.

"Too bad all that money can't buy you skill." 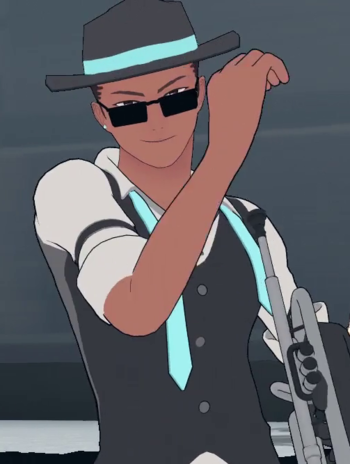 "That was a gutsy move, Schnee... I dig it."
Click here to see him after the timeskip. 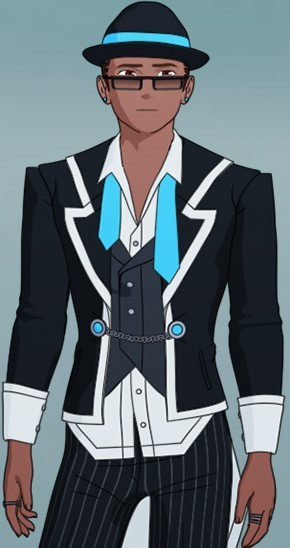 A musician who resents the Schnees, and a self-duplication Semblance. He mostly supports Neon in combat, but is still extremely dangerous on his own thanks to his trumpet.

"You should try rollerblading sometime! It's super fun! It would probably take you a while though, since you're so, you know, 'top-heavy'." 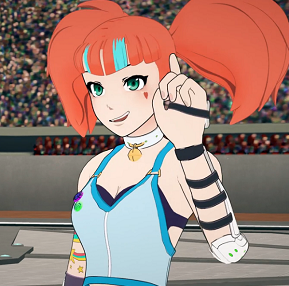 "Never miss a beat."
Click here to see her after the timeskip. 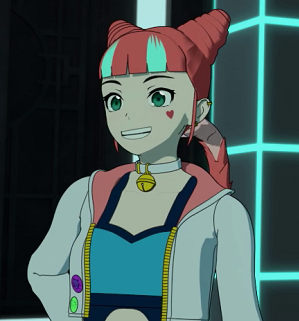 A hyper-energetic cat Faunus who likes rollerblades. Not shy about dropping insults, Neon skates around the battlefield and uses a pair of nunchaku to deliver painful strikes on her foe. 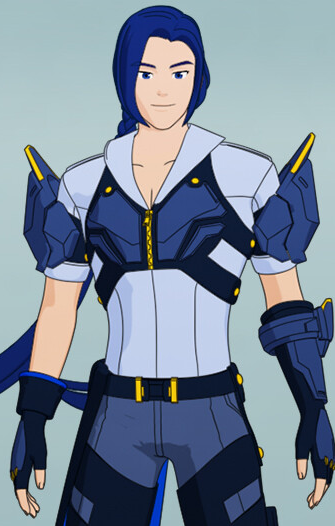 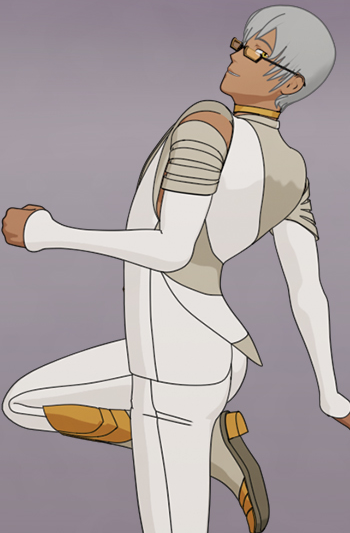 The military of Atlas is very proficient and very active around the world. While many serve the general in Atlas, many others are stationed at different locations all around the world, be it on short-term or long-term assignment. 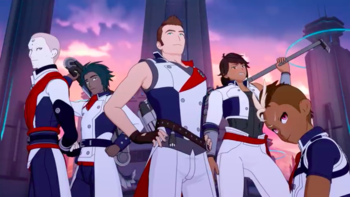 The Ace Operatives is a group of five elite soldiers who are both licensed Huntsmen and General Ironwood's personal enforcers. Each has been made aware of the wider conflict with Salem and are involved with Ironwood's plans to change the course of the fight against Salem. 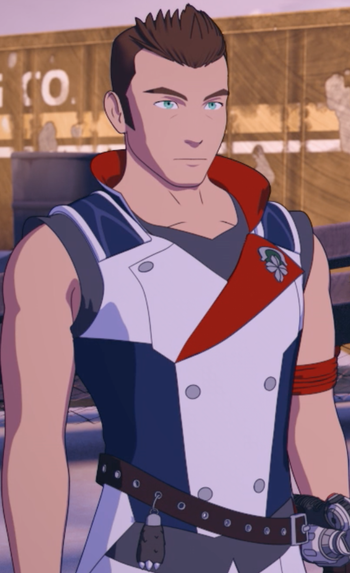 "You might be students, but you’ve been fighting just as hard as we have, if not harder."

A tall man who is the leader of Ace-Ops. He fights with Kingfisher, a weapon that can be cast and reeled in like a fishing pole. His Semblance brings good fortune to himself and those around him. 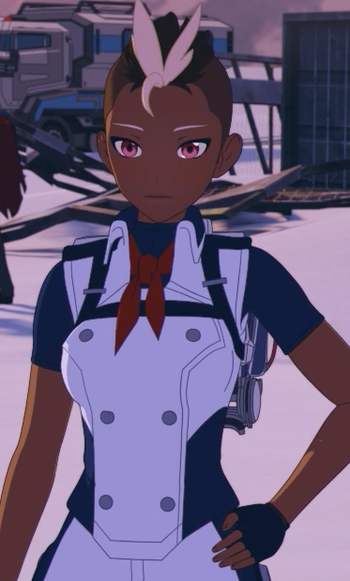 "I’m looking forward to seeing what you kids can do."

A woman with a competitive and chatty personality, who fights with a pair of gauntlets called Fast Knuckles. Her Semblance gives her incredible speed. 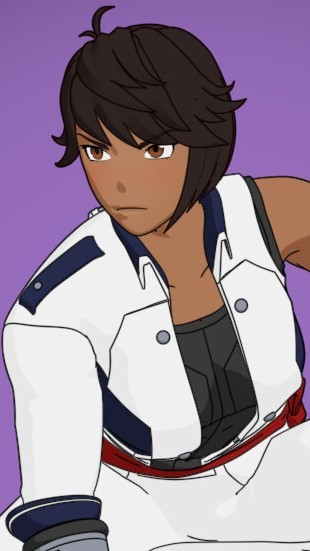 "Perhaps you kids won’t get yourselves killed after all!"

A huge, powerfully built woman with an very enthusiastic personality. She fights with Timber, a massive war-hammer that can also become a rocket launcher. Her Semblance allows her to encase her feet in energy that locks her in place as though rooting her to the ground like a tree. 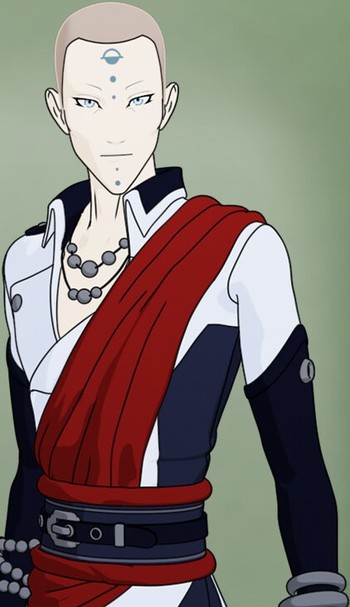 A tall thin man with a calm personality. His weapon is Thorn, a bladed chakram he carries on his back. His Semblance allows him to encase his limbs in energy that stretch out like vines to achieve a variety of effects ranging from locking himself into place to lassoing distant opponents.

The current capital of the Kingdom of Atlas, the city floats in the skies above Solitas, where the smoke from the Dust mines below cannot reach. A clean, modern city that's been nicknamed 'the City of Dreams', Atlas boasts state-of-the-art technology and security defenses, well-resourced education and training, and comfortable lifestyles. 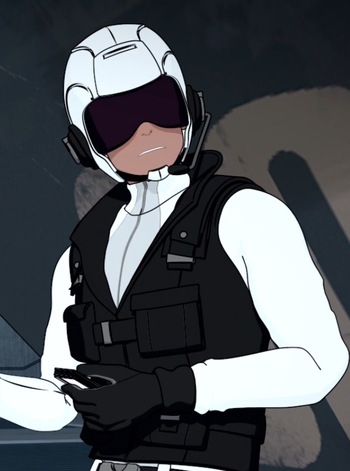 A Pilot who flies a cargo ship from Atlas to Mistral. He's willing to take a bribe to have Weiss escape Atlas. 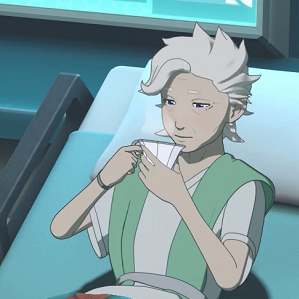 An elderly woman who, despite being on her deathbed, is being held in a maximum-security Atlesian facility. 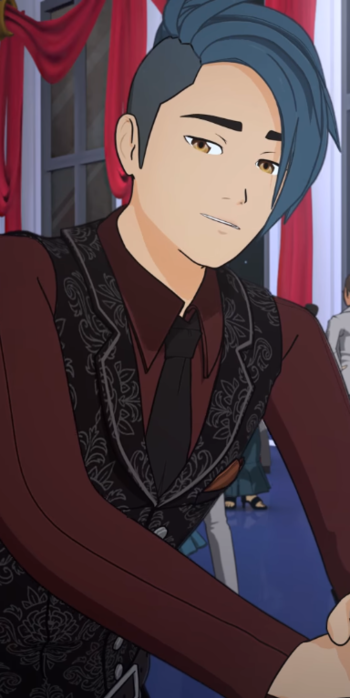 "Heheh, I'll admit, I only come to these things for the food and drinks... and the extraordinary company, of course."

A young man who is at the Schnee benefit gala for Vale. He offends Weiss when he tries to talk to her.

Debut: RWBY Before The Dawn * A spin-off light novel that is considered canon

The father of CFVY member Velvet Scarlatina. He is a brilliant scientist originally from Vale, recruited by General Ironwood to work on military projects.

Madame and her daughters

Madame and her daughters 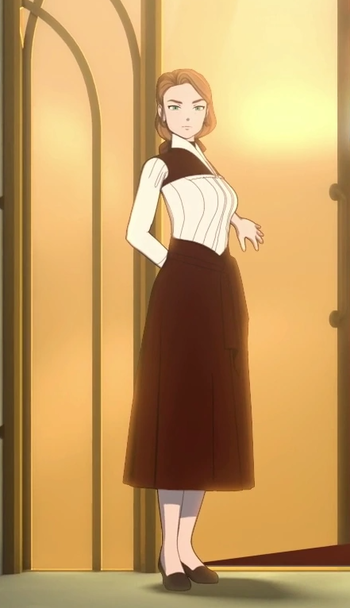 A wealthy Atlesian woman with two daughters who owned the Glass Unicorn, an upscale hotel in Atlas. She found Cinder in an orphanage and made herself Cinder's legal guardian, bringing her to the hotel to live... and to work as a slave.

"Just a few more years and you won't need your guardian's permission." 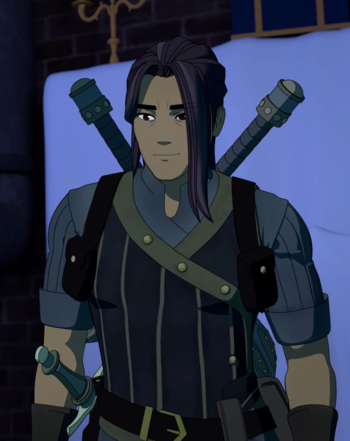 An Atlesian Huntsman who took pity on a young Cinder and encouraged her to become a Huntress. He trained her in secret for several years, but was unable to protect her from her abusive "family".

His weapons consisted of a pair of maces he could dual-wield as either maces or guns, and also a short sword.

One of the most powerful families on Remnant, the Schnee family runs the largest Dust company on the planet, controlling everything from mining to munition-making. Despite their impeccable public image, the Schnee family has quite a murky history. 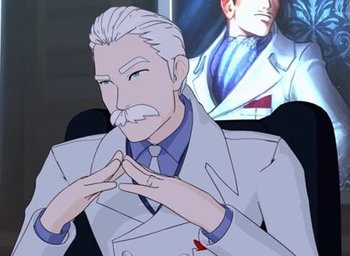 "Did you forget your manners while you were away?"
"I'm sorry. I tuned out for a second, but sounds like I'm the good guy again."

Jacques is in charge of running the Schnee Dust Company (SDC), one of the largest producers of Dust on Remnant and the father of Winter, Weiss, and Whitley Schnee. His original name was Jacques Gelé (French for Jack Frost), but he took the Schnee name when he married into the Schnee family and was given control of the company by his father-in-law. 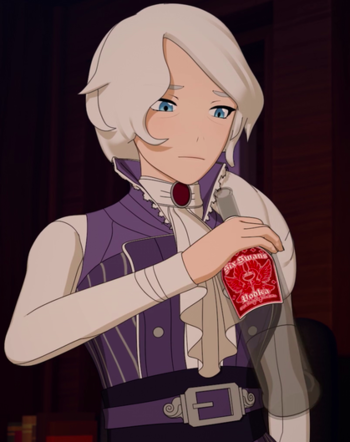 "I'm sorry I couldn't come down for your party, I'm... afraid I'm not feeling well."
"I'm afraid your father may be involved in something more dangerous than he realizes."

Jacques's wife and the mother of his three children, and daughter of SDC founder Nicholas Schnee.

"I'll have you know I didn't stop growing while you were away at Beacon." 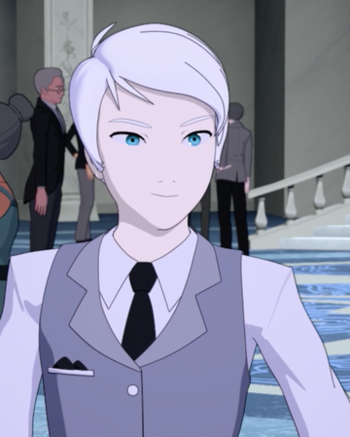 Weiss and Winter's little brother and the current heir presumptive of the SDC. 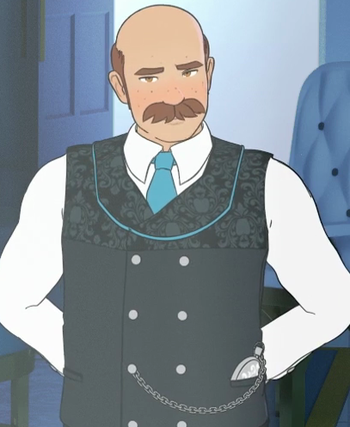 Klein works in the Schnee household as a butler and has the ability to switch between a number of different personas with different eye colors.

The Atlesian council is the governing body of the Kingdom of Atlas and oversees both the cities of Atlas and Mantle. Its members are democratically elected by the kingdom's citizens and therefore can be natives of either Atlas or Mantle.

"The fact of the matter is, you've operated with a fair amount of autonomy for the past few years, James. But what we need now is for you to work with us." 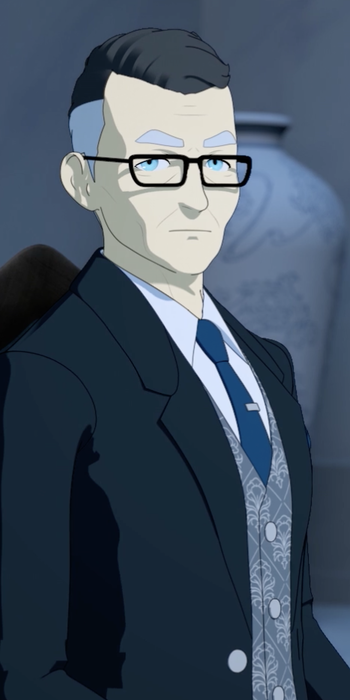 "What people intend and what they do aren't always the same, General."

An elderly male member of the Atlas Council.

"It's obvious that no Kingdom intends to declare war on Atlas. We had no involvement in the incident at Haven, we have proof our drones weren't acting on orders at Beacon. At this point, the closure of Atlas borders is only serving to hurt our relations with the rest of the world." 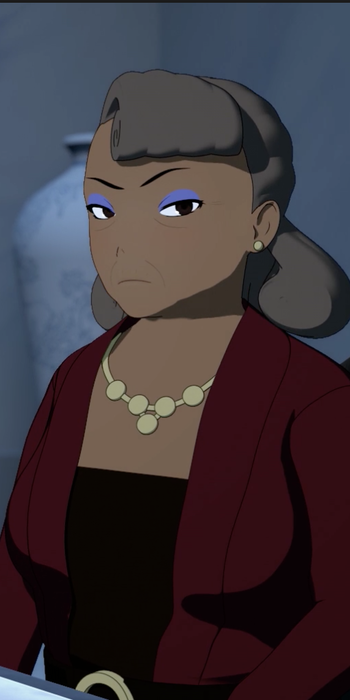 A short female member of the Atlas Council.

The original capital of the former Kingdom of Mantle, the rise of Atlas reduced Mantle to a shadow of its former self. Streets are run-down, technology is old, security defenses haven't been updated in years, and smog from the mines hangs heavy over the city. People struggle to eke out an existence, depending on dangerous mines for work and experiencing regular Grimm attacks that the city increasingly struggles to repel. Meanwhile, Atlas hangs in the sky above their heads; a constant reminder of the wealthy elite that is failing to share the wealth that Mantle creates, and a target of Mantle's growing resentment and anger at having been left so far behind. 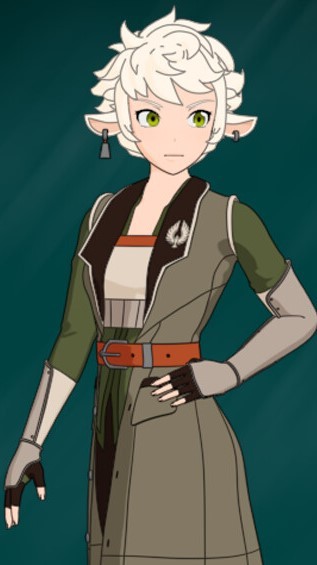 "This is Mantle's moment."

A short sheep Faunus who fights alongside Robyn Hill to uphold the rights of Mantle. Her Semblance "Pocket Dimensions" allows her to dematerialize inanimate objects and store them in a pocket dimension in the palm of her hand, then release them at her discretion.

"Either you're helping... or you're baggage." 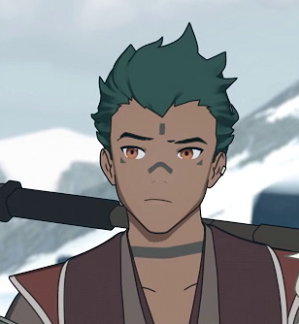 A tall, butch woman who fights alongside Robyn Hill to uphold the rights of Mantle. 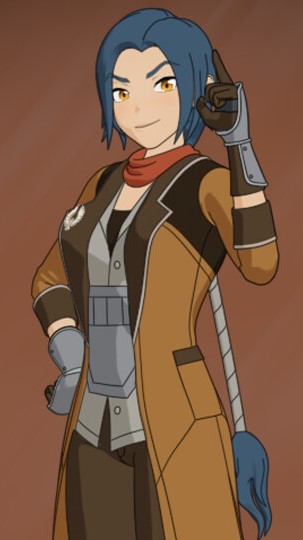 A tall woman who fights alongside Robyn Hill to uphold the rights of Mantle. She fights with a spear. Her Semblance is an invisibility shield; by expanding her Aura, she can cloak everyone and everything inside it from being seen by those outside. 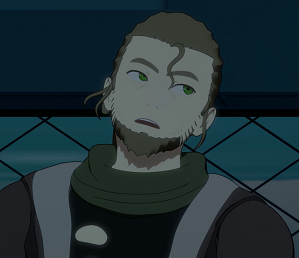 "It’s worth it if it gets people talking about our cause!"

An embittered citizen of Mantle who vocally expresses his resentment of Atlas's lush lifestyle and Ironwood's iron-fisted enforcement of the embargo; he is an ardent supporter of the movement headed by Robyn Hill.