All spoilers for the first five volumes are unmarked. Examples from Volumes 6 and 7 can be spoiler tagged if deemed necessary.

"Why do you suppose he asked us about being a Huntress?"

The titular team of the series, RWBY (pronounced Ruby) is composed of Ruby Rose, Weiss Schnee, Blake Belladonna and Yang Xiao Long, four girls who had no idea how to interact with each other but eventually became close friends and one of the strongest teams in the first year. Despite being students, they actively work to secretly combat the White Fang and the villains controlling them, breaking rules when necessary.

open/close all folders
In General
"Imagine what it'll be like when we graduate!"
Advertisement:
Ruby Rose 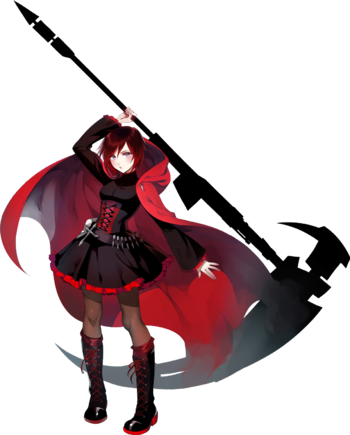 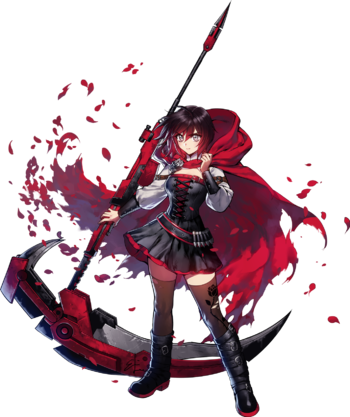 "We’ve all lost something, and I’ve seen what loss can do to people. But if we gave up every time we lost, then we’d never be able to move forward."
"As a girl, I wanted to be just like those heroes in the books — someone who fought for what was right and who protected people who couldn't protect themselves."

Ruby is a student at Signal Academy who is admitted to Beacon Academy two years early to train to become a Huntress at the beginning of the series. She is very cheerful and optimistic, but a little socially awkward and somewhat fixated on her weapon, Crescent Rose. She is partnered with Weiss, and is the leader of Team RWBY. She was trained by her uncle, who helped her design Crescent Rose.

Ruby's weapon, Crescent Rose, is described as a "high velocity sniper-scythe". As this suggests, its a large scythe that also fires high-caliber sniper rifle ammo. In addition, its blade angle can change — usually relative to Ruby's momentum — effectively turning it into a war glaive (a polearm with an inwardly-curving sword-like blade on the end). Her Semblance "Petal Burst" allows her to become a cloud of rose petals, granting her an immense speed and mobility boost. 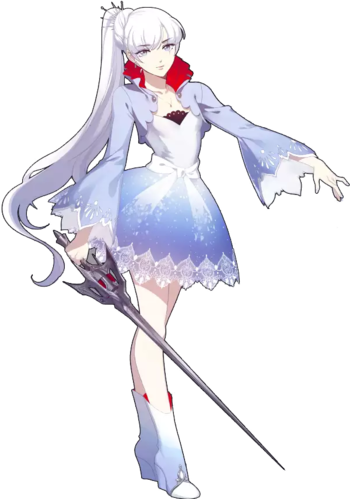 "I'm. Not. Perfect. ...Not yet."
Click here to see her post-timeskip appearance 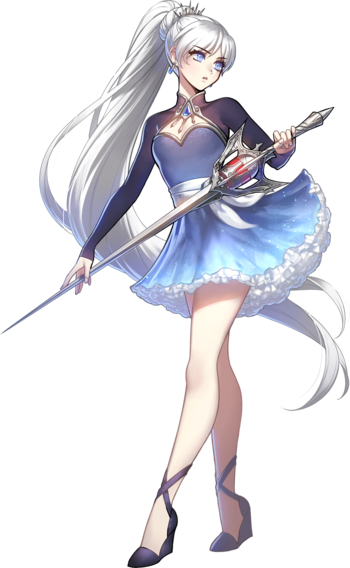 "You don't have a clue! None of you do! You're all just standing around, talking about nothing: worrying about your hair, your money, your stupid problems that don't mean anything!"
"When I said I wanted to honour my family's name, I meant it. But — it's not what you think. I'm not stupid; I'm fully aware of what my father has done with the Schnee Dust Company. Since he took control, our business has operated in a 'moral grey area' ... which is why I feel the need to make things right. If I had taken a job in Atlas, it wouldn't have changed anything. My father was not the start of our name, and I refuse to let him be the end of it."

Weiss is the heiress to the Schnee Dust Company and a new student at Beacon Academy. As expected of someone from a rich family, she is haughty and dismissive of others, but over time it's revealed that she has a softer side as well, and desperately wishes to prove her worth as a Schnee. She is partnered with Ruby.

Weiss's weapon, Myrtenaster, is described as a "multi-action Dust rapier". It has a revolving chamber that gives it supernatural effects. Her Semblance, "Glyphs", allows her to generate Instant Runes which allow her to perform a variety of effects ranging from augmenting her speed or defying gravity, to summoning ice-clones of the foes she's slain in previous battles. She is able to combine Dust and her Glyphs to create additional effects, such as creating gravitational force. 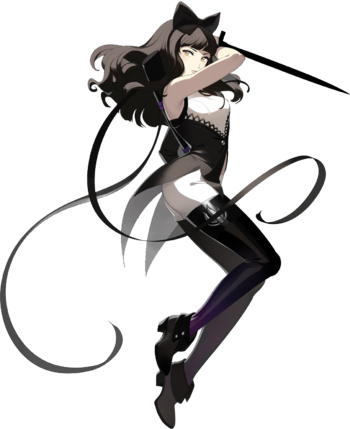 "Don't be so dramatic."
Click here to see her post-timeskip appearance 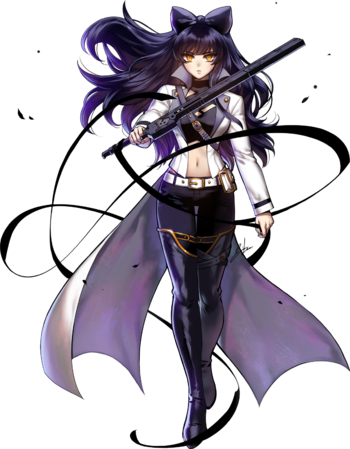 "...No. No more. They're better off without me. I made my choices and I'll deal with the consequences because they belong to me."
"All my life, I fought for what I thought was right. I had a partner named Adam. More of a mentor, actually. He always assured me that what we were doing would make the world a better place but, of course, his idea of a perfect future turned out to be not perfect for everyone. I joined the Academy because I knew Huntsmen and Huntresses were regarded as the most noble warriors in the world, always fighting for good, but I never really thought past that. When I leave the Academy, what will I—? How can I undo so many years of hate?"

Blake's weapon, Gambol Shroud, is described as a "variant ballistic chain-scythe". While it seems to resemble an oversized cleaver, that's actually its sheath, which has a sharp edge in itself. The weapon itself is a katana with a gun attached to it, and the gun's trigger is itself attached to a ribbon Blake wraps around her wrist. Her Semblance, "Shadow," lets her create temporary shadow clones that allow Blake to dodge incoming attacks.

"Great! The gang's all here. Now we can die together!"
Click here to see her post-timeskip appearance 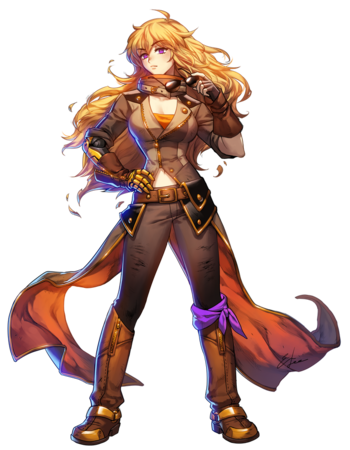 "And I think I have been through enough to be considered an adult at this point."
"At least you two have something that drives you. I've just kinda always gone with the flow, you know? And that's fine; I mean, that's who I am, but how long can I really do that for? I wanna be a Huntress, not really because I want to be a hero, but because I want the adventure. I want a life where I won't know what tomorrow will bring and that will be a good thing. Being a Huntress just happens to line up with that."

The daughter of Taiyang Xiao Long and Raven Branwen, Yang is an energetic, blond-haired young woman with a violent streak. She is going to Beacon Academy to train to be a huntress, and is overjoyed when her younger sister Ruby is asked to attend Beacon Academy as well. She is partnered with Blake.

Yang's weapon, Ember Celica, is described as "dual-ranged shot-gauntlets". They're a pair of retractable gauntlets that can fire shotgun shells. Her Semblance, "Burn," allows her to absorb energy from the damage she takes when struck and use it to multiply her strength.

"It's a job. We all had this romanticised vision of being a Huntress in our heads but, at the end of the day, it's a job to protect the people. And whatever we want will have to come second."
Advertisement: