The protagonists and rival of Pokémon Gold and Silver and its remake. 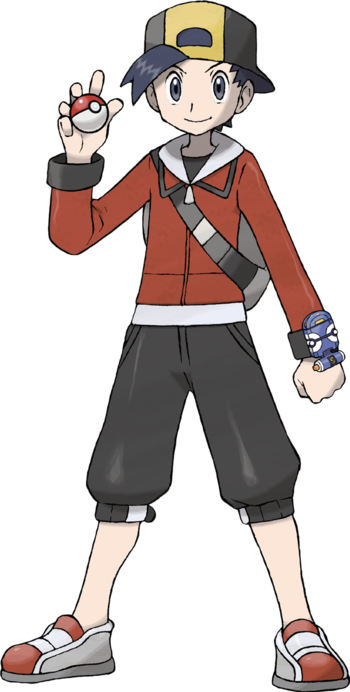 Three years after Red defeated Team Rocket and won the Pokémon League, a new Pokémon trainer from New Bark Town in the Johto region was given his first Pokémon. He was given the same task to catch them all, although now there are more species to find.

Just like Red, he was the sole protagonist in Pokémon Gold and Silver, although that changed when Pokémon Crystal came out. You could now choose him or the female protagonist of that game. When his games were given remakes, he was given another female counterpart named Lyra, along with updating from his version name (Gold) to a new canon name (Ethan) and a new design.

Introduced in Pokémon Crystal, Kris was the very first protagonist you could choose who was female. Before this, the only option was a boy. However, unlike some later games, this was purely aesthetic and had no bearing on the plot, and her story is identical to Ethan's.

Rather than re-using Kris for the remakes of Pokémon Gold and Silver, the game designers created a new female protagonist for HeartGold and SoulSilver. Lyra is a young girl who resides in New Bark Town and is just starting out as a trainer... If you're choosing her as the player character. Like most of the later games in the series, the protagonist that the player didn't choose will still show up as an NPC. In this case, she'll be a friend who shows you the ropes on catching Pokémon. She appeared in the anime as a trainer who traveled with Ash and friends for a time to promote her (then newly released) games.

Her version name is unclear, potentially Soul, Heart, or in the context of Adventures merged with Crystal.

Voiced by: Lucien Dodge (Pokémon Generations - EN), Ryota Ohsaka (Pokémon Generations - JP), Joe Zieja (Pokémon Masters - EN), Yuki Ono (Pokémon Masters - JP)
"I hate the weak. Pokémon, trainers. It doesn't matter who or what. I'm going to be strong and wipe out the weak. That goes for Team Rocket too. They act big and tough in a group. But get them alone, and they're weak. I hate them all. You stay out of my way. A weakling like you is only a distraction."

The Rival in Gold, Silver, and Crystal. He is a selfish thug whose first act is to steal his starting Pokémon from the Elm Research Lab. Fuelled by a hatred towards Team Rocket, he is obsessed with growing stronger as quickly as possible and sees his Pokémon as mere tools to his ascent. After being defeated by Lance, Silver begins to realize the folly of this approach and slowly turns over a new leaf.

He's the only non-Kanto trainer to use his version name as his canon name as of Gen IV onward.