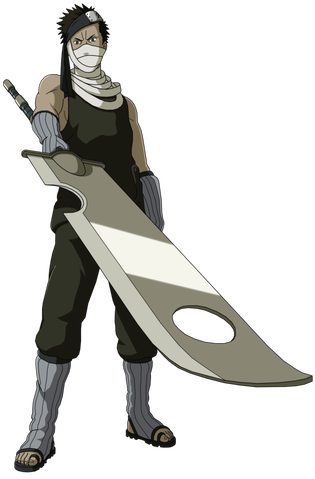 As I was used by Gatō, I used Haku. That was all. I've said it already... in the world of shinobi, there are only those who use and those who are used. We shinobi are simply tools... what I wanted was his blood, not him... I have no regrets.

The first major antagonist of the series, a renegade shinobi from the Hidden Mist Village hired to kill Tazuna the bridge-builder.

Before the series, he led a coup attempting to oust the Mizukage and take control of the Village for himself; this failed, and Zabuza barely escaped with his life. Since then, he's been hiring out his sword to the highest bidder, hoping to raise enough funds for another go at the Mizukage.

Zabuza was one of the Seven Swordsmen of the Mist (like Kisame), making him one the strongest ninja in the Hidden Mist Village before his defection. He knows a great deal of Water-Style jutsu and has the ability to shroud himself in mist, making himself invisible. Plus, of course, he's got a BFS. In a slight subversion of the Sorting Algorithm of Evil, Zabuza was far too strong for Naruto or Sasuke as they were at the beginning of the series to take on; they had to leave him to Kakashi.

Zabuza attacked Team 7 twice during the Land of Waves arc, first with a collection of hirelings, then with his protege Haku. He battled Kakashi to a draw both times before Haku's Heroic Sacrifice caused him to turn on and kill his employer, Gato. He dies in the process, and asks to be buried along with Haku.

In Shippuden, Sasuke takes Suigetsu to Zabuza's grave so that Suigetsu can take Zabuza's BFS. Much later, Kabuto resurrects him and Haku with Edo Tensei, and he is not the least bit happy about it. He is quickly defeated by Kakashi.

Zabuza's Battle Butler. An extreme case of Dude Looks Like a Lady (resulted in Unsettling Gender-Reveal for Naruto).

Haku was born in a cold village orphaned during the wars. At the time, there was a prejudice against people with kekkai genkai; unfortunately, Haku's mother had one, which he inherited.. When Haku's dad and the villagers learned of it, they killed Haku's mom and tried to kill him, but he killed them with his newfound powers instead and ran away. Zabuza encountered him and, thinking he might be useful, took him in and raised him. After only a few years, Haku was almost as good an assassin as Zabuza himself.

An Anti-Villain, Haku serves Zabuza because he lacks any other sense of purpose in life, claiming to be nothing more than Zabuza's tool. Zabuza treats him as such.

Haku's kekkai genkai, the one he got from his Missing Mom, allows him to fuse the water and wind elements to generate ice. He uses this ability to perform the devastating Demonic Ice Mirrors (Crystal Ice Mirrors in the dub) jutsu. Demonic Ice Mirrors generates a dome of mirror-like panes of ice around his opponents, each with an image of Haku reflected in them. Haku can travel between the panes at high speed, attacking with needle-like senbon while in transit. The panes are all but indestructible, so Haku can fight defensively, avoiding damage and wearing his opponents down bit by bit. It takes the combined power of Sasuke's Sharingan developing and the Nine-Tailed Fox's chakra manifesting for the first time to break the mirrors.

Haku first appears after Zabuza's first encounter with Team 7 disguised as a Mist Village "hunter-nin", claiming that he's been assigned to kill Zabuza for betraying the Village. In reality, however, Haku merely stunned Zabuza, allowing the pair to escape unharmed. He later appears to give Naruto some advice (since Haku was wearing a mask during their first encounter, Naruto didn't recognize him), and then again at the arc's climactic battle on the bridge, where he engages Naruto and Sasuke while Zabuza faces down Kakashi (and poor Sakura, uh, looks on helplessly, since she's stuck shielding Tazuna). After a lengthy battle, Haku jumps in front of Zabuza to protect him from Kakashi's Lightning Blade. Zabuza, realizing how much he valued Haku's companionship, ceases his pursuit of Tazuna and turns on Gato, killing him and lots of his minions in a desperate and badass Foe-Tossing Charge before he dies.

Kabuto later resurrects him and Zabuza with Edo Tensei. He sacrifices himself (again) to prevent Kakashi from killing Zabuza (again). 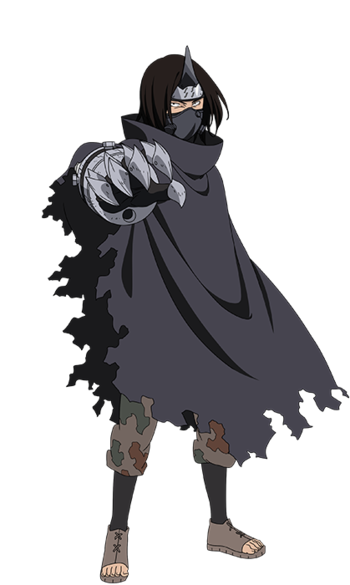 Meizu
How did you know about our ambush?

Zabuza's other henchmen who fled with him after his failed coup d'etat in the Village Hidden in the Mist. Older brother Gōzu is the cool-headed, rational one whereas his younger brother Meizu is short-fused and sadistic in torturing his prey. They fight with sharp chains and poisonous claws, often in conjunction with each other.

They attack Team 7 not long after leaving the Leaf Village in an attempt to kill Tazuna, with Meizu poisoning Naruto. Kakashi is able to fake them out and easily defeats them, tying them to a tree to await arrest. Despite their small role, the brothers' attack on Naruto would go on to affect him for much of his early days as a ninja.

It always hurts my heart to melt a good-looking guy...but you're going to have to die.

A very beautiful adult woman who is currently the leader of the Village Hidden in the Mist and apparently relatively new to the position. She does not remember the previous leadership fondly. Tends to coddle her younger bodyguard.

During the Kage Summit, she acts rather dodgy when asked about rumors that Akatsuki formed in her village, and when she finds out Danzo is capable of Mind Control she suspects him of using it on the previous Mizukage. She manages to nearly kill Sasuke during the meeting and initially helped guard the daimyo of the Shinobi Countries. She then fights the revived Madara Uchiha alongside the other Kages, but despite their impressive teamwork they still end up losing to Madara's might.

Years after the war comes to an end and during some point at the epilogue, Mei passes down her title to her former bodyguard Chojiro. Hilariously, she still hasn't gotten married, though this doesn't seem to bother her much anymore.

One of the Mizukage's bodyguards. Middle-aged and wears an eyepatch. Critical of his teammate Chojuro's indecisiveness, likely as a result of his upbringing during the time when the village was known as "the Blood Mist".

When Mifune suggests Danzo to lead the inter-village effort against Akatsuki, Ao reveals that he has a Byakugan under his eyepatch and uses it to discover that Danzo's eye and arm are that of a ninja he previously fought named Shisui Uchiha, who had the ability to control others minds without their knowledge. He then goes after Danzo's group when they flee, but falls for Fu's trap, with Danzo not too happy about him possessing abilities taken from a Konoha ninja. He is eventually saved by the 5th Mizukage and Chojuro, and he in the Allied Shinobi Forces as captain of the Sensor Division. When the base is destroyed by an attack of the Juubi, he seemingly dies alongside his comrades, but it turned out he survived.

She's so kind. I will do everything to protect that smile on our gentle Mizukage. I hope I can.

Like Ao, he is another bodyguard to Mei Terumi, the 5th Mizukage. One of the 7 Swordsmen of the Mist. Now that Zabuza & Kisame are dead, the only real one left. Frequently annoys Ao because he stutters and seems to lack self-confidence.

After accompanying the Mizukage to the Kage Summit, he is currently helping her guard the daimyo of the Shinobi Countries.

He later becomes the Sixth Mizukage sometime after the War.

Charisma oozes out of people without eyebrows, you know! Hot-damn! I don't have eyebrows either!

One of most powerful Shinobi, Gengetsu Hozuki, the Second Mizukage, was a respected leader of Kirigakure. He was killed during the last confrontation against the Second Tsuchikage Mu, killing him at the same time. Kabuto's Edo Tensei brought him back to life to face the Shinobi Alliance in the Fourth Shinobi World War. Besides being a very tall mustached man with large poofy hair, curious way of dressing and with no eyebrows, not much is known about him other than he was a Master of Illusion, a laid back, and very charismatic leader concerned with the welfare of the Secret World and that he loathed the Second Tsuchikage. It is revealed in chapter 556 that he was a member of the Hozuki clan, like Suigetsu and his brother. Uniquely to the former two, his hydrification technique manifests itself in the form of producing an oily, water-like substance. 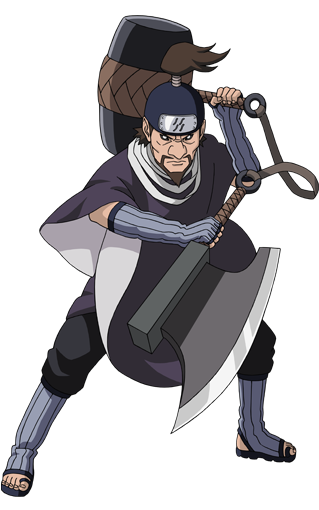 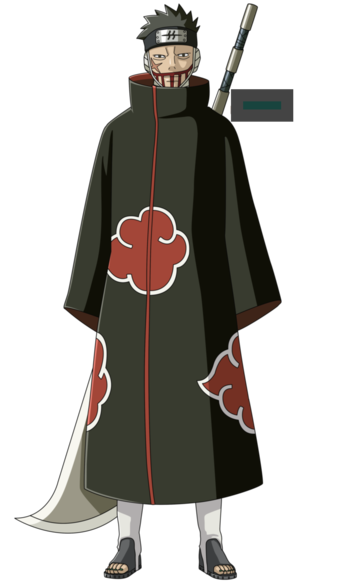 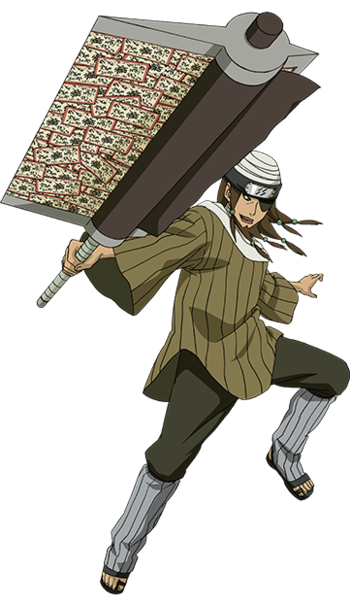 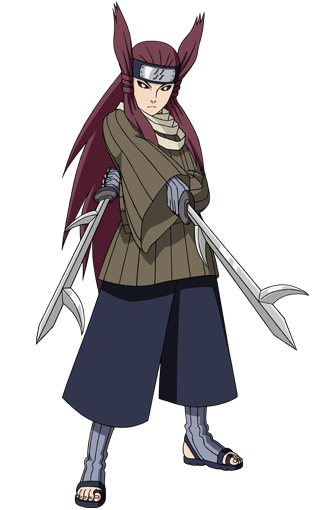 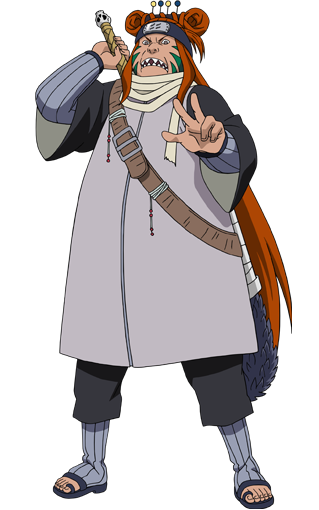 The Seven Ninja Swordsmen of the Mist are a group of the most powerful and skilled swordsmen in Mist, each of whom wields one of seven powerful swords (passed down in Kiri). Of all the known members, which also included Zabuza Momochi and Kisame Hoshigaki, Chojuro is the sole surviving official member. Meanwhile, Mangetsu Hozuki's younger brother, Suigestu Hozuki, dreams of collecting all their swords and reforming the group once again. 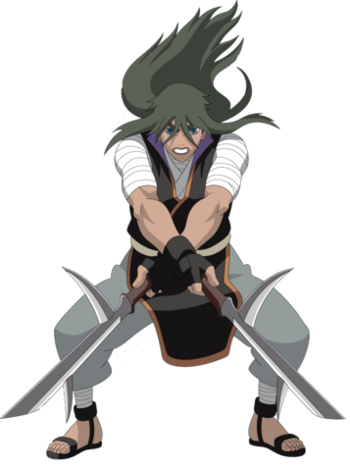 I always find that funerals bring out the best in people. There's no hatred or sadness involved; only the good times that they shared and the happy memories.

Raiga Kurosuki (黒鋤雷牙, Kurosuki Raiga) was a former member of Kirigakure's Seven Ninja Swordsmen of the Mist introduced in an anime filler arc, and the current owner of the Kiba double lightning sword. During his life in Kirikagure, Raiga was a very tormented, cruel, and lonely individual looking for the meaning of life. During a raid on a village, Raiga finds a boy with health problems named Ranmaru. Ranmaru is the possessor of a rare Bloodline Limit which can create very powerful illusions (enough to even fool the Hyuga Clan's Byakugan) and see-through things. However, in the end, Ranmaru wishes to expand his horizons beyond just killing and weeping with Raiga, to which the swordsman realizes that the boy will never be free as long as he lives and allows Naruto to punch him off a cliff. Raiga gives himself a funeral of lightning leaving not even a particle of himself behind.

Unlike most of his fellow swordsmen, Raiga remained dead during the duration of the Fourth Shinobi World War.