Here be spoilers. If following the Anime it is advisable to steer far away from this section. 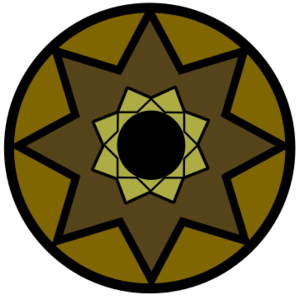 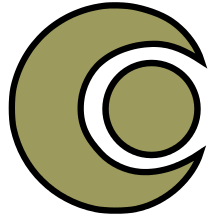 The Ōtsutsuki Clan is the force behind the foundation of the Narutoverse's Shinobi world. However, the creation of Shinobi, or indeed humans having chakra at all, is something that was never intended by these initial Precursors. The Ōtsutsuki Clan's existence on Earth began over a thousand years ago and it is unknown when and where they were born. The enigmatic nature of the clan's existence is so closely guarded that it is to the point that the databook simply describes them being "from another world". In addition to being the ancestors of the Senju, Uzumaki, Uchiha, Hyuga, and Kaguya clans, who inherited unique abilities that made them powerful forces in the modern world of Naruto, they are also behind the distribution of Chakra to all individuals.

Over a millennium ago the Ōtsutsuki Clan members Isshiki and Kaguya Ōtsutsuki appeared on the Earth with the goal of eventually harvesting the Chakra Fruit produced by the God Tree and with it over time devour the life force of the planet to sustain their own immortal lives. When Kaguya Ōtsutsuki arrived, she betrayed Isshiki and left him for dead, and eventually matured the God Tree, ate the Chakra Fruit as she had intended to do from the start, and became the first chakra user on Earth (in the process defying her clan by taking all the power for herself). Using the power gained from eating the Chakra Fruit, she cast the first Infinite Tsukuyomi, which would turn everyone into White Zetsus to serve as soldiers for her when her clan would eventually pursue to punish her. She later freed a few humans to make sure they did not get completely wiped out, erased their memories, and had them rebuild society with her as their ruler. She later gave birth to two sons: Hagoromo and Hamura.

The consequences of eating the chakra fruit, however, had soon taken root and took a toll on Kaguya's personality, though it is unclear how benevolent she ever really was. While first worshiped as a goddess, her brutal retribution toward any defiance would over time cause humanity to fear her as a demon. In the anime she is also depicted as having continued to drain the Earth of life via the God Tree, periodically sacrificing humans to it as well. The matriarch of the Earth-based Ōtsutsuki clan also developed an obsessive lust for chakra which later culminated in turning her sights on her two sons, whom she discovered had inherited chakra from her. Kaguya, seeking more power (and in the anime responding to them rebelling against her tyrannical methods), fused with the God Tree and became the Juubi (the Ten-Tails), rampaging across the land and battling with her twin sons. Oblivious of the true identity of the Juubi being their mother, both Hagoromo and Hamura fought heroically against the Juubi without hesitation. After a long and fierce battle the two trapped it through activating Rikudō — Chibaku Tensei/ Six Paths Chibaku Tensei. The Juubi's body (and presumably Kaguya's soul) was thus sealed into the sealing stone that became the moon, while its chakra was sealed within Hagoromo and later formed into nine sapient parts to avoid the possibility of Juubi resurrecting when Hagoromo died of old age.

Following the end of the battle the twin sons went their separate ways. The younger brother, Hamura, founded a clan he named after his mother's family and led them to the moon where they guarded the remaining shell of the Juubi, which became known as the Gedō Statue. The elder brother, Hagoromo, chose to stay on Earth to spread the teachings of Ninshu, and in turn spread chakra to the rest of the world, believing that keeping the power to himself would only invite his own corruption. Hagoromo would later have sons of his own, and on his deathbed, entrusted the younger with guiding humanity in his teachings.

Beginning with the events of Boruto, full-blooded Otsutsuki members — those who came from the same world as Kaguya's — begin threatening Earth as they plan to continue what she failed to do. At present it is unclear why they waited a thousand years to arrive. For more information about them, see this page.

Ōtsutsuki Clan as a whole provide examples of: 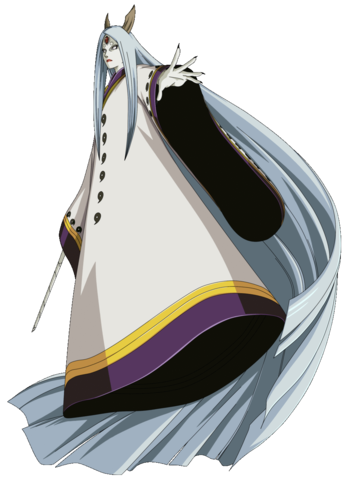 The originator of chakra on Earth, as a result of eating a chakra fruit from the God Tree, and the mother of the Sage of Six Paths, Hagoromo, as well as Hamura, the younger twin and the one who went to the Moon. She is also notably the only full blooded female Ōtsutsuki so far seen. 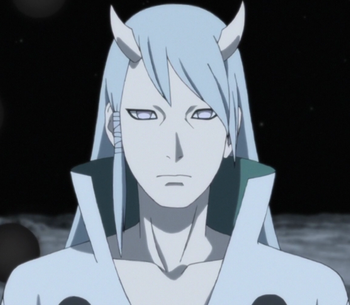 The Sage of Six Path's twin brother and youngest of the two, and the ancestor of the Hyuga clan. After defeating their mother he took some of his family to the moon where they watched over the remains of the Ten-Tails. 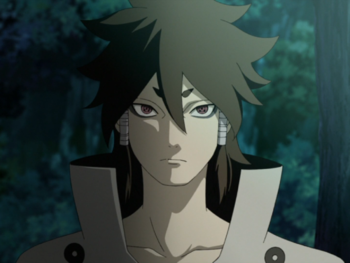 The eldest son of the Sage of Six Paths, and the ancestor of the Uchiha clan. 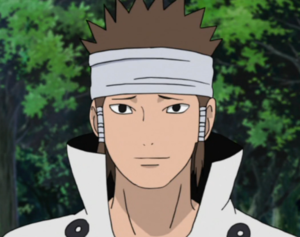 The youngest son and successor of the Sage of Six Paths, and the ancestor of the Senju and Uzumaki clans. 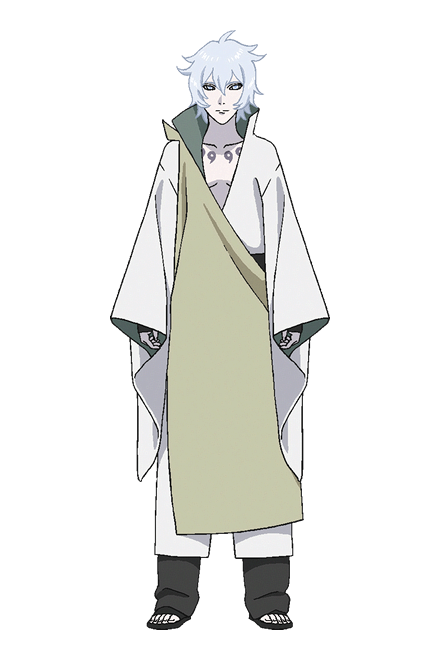 The Big Bad of the seventh Shippuden movie (and the first Canon movie in the franchise), The Last: Naruto the Movie. A descendant of Hamura Otsutsuki who hails from the moon, he intends to drop the moon onto the Earth as punishment to mankind who have abused chakra in their petty wars and attempts to kidnap Hinata, for the sole purpose of gaining a wife after Earth has been wiped clean of all life. It's later revealed that he belongs the Branch Family of the Otsutsuki clan that wiped out the Main Family after they misinterpreted Hamura Otsutsuki's will. To get Hinata to come to him, he has his puppets kidnap Hanabi Hyuga and steals her eyes in order to awaken the legendary Tenseigan: eyes that rivals the Rinnegan in power. Despite all the evil he commits, Toneri demonstrates that his isolation on the moon drove him to desperation for companionship and after being defeated by Naruto and Hinata and shown the error of his ways, he stops trying to destroy the Earth and lives the remainder of his life on the Moon as atonement.