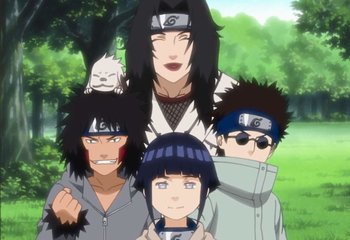 In full part ofnote From left to right: Front Row: Kiba, Hinata, Shino Back Row: Kurenai
Team 8, also known as Team Kurenai, was a ninja team led by Kurenai Yuhi. Its members are Kiba Inuzuka, his pet Akamaru, Hinata Hyuga, and Shino Aburame. The team specializes in tracking and locating through the use of the Hyuga clan's Byakugan, the Aburame clan's bugs, and the Inuzuka clan's dogs as well as Kiba's own heightened sense of smell.

Alongside Team 7, Team 8 was the only team not to lose any members throughout Part II (Team 10 losing Asuma, Team Guy losing Neji), though Kurenai herself was put on maternity leave to take care of her daughter. Hinata eventually married Naruto and the two settled down and had two children, Boruto Uzumaki and Himawari Uzumaki, while Kiba started dating Tamaki, and Shino became a teacher at the Academy.

The character sheet for Hinata had become large enough to be separated into a character page. You can find her page here.

Heh, I don't know what's going on, but I'm always up for getting wild.

Member of Team 8. Kiba is a wild, untamed ninja from the Inuzuka clan, a family of dog breeders. As such, he's never seen without his loyal pooch, a Great Pyranees named Akamaru. Kiba utilizes him as both a partner and a weapon, and later as a transport.

He treats Hinata like a younger sister, fights with his ultra-serious partner Shino and, after initially mocking him, considers Naruto one of his closest friends.

Kiba fights Naruto in the preliminary rounds of the Chunin Exams, which is one of the latter's first big solo fights in the series. Kiba tries a number of attacks and strategies to beat Naruto, but the kid just won't stay down. Later, Kiba is recruited by Shikamaru for the Sasuke Retrieval team, fights and is nearly killed by Sakon, and is saved by Kankuro.

Among Kiba's abilities is a heightened sense of smell, which makes him especially effective at tracking. He is also one of the fastest seen ninjas. In battle, Kiba can transform Akamaru into a clone of himself, allowing them to use combination attacks such as the tornado-like Fang Over Fang. He can also make himself more bestial in nature, increasing his speed and strength, and can combine with Akamaru to become a two-headed wolf. In Part II, he has developed his sense of smell to the point that it is superior to that of a dog's. When the Fourth Shinobi World War started, he was placed in the Fifth Division along with Shino, his sister Hana, and Ino.

After the events of the war, Kiba's dream of becoming Hokage was never realized, though he does settle down years later with his new love interest, Tamaki, a beautiful girl with a fondness for cats.

Even if it's been a while, you should remember your comrades' faces. Why? Because otherwise you will hurt their feelings when they call out to you.

Member of Team 8. Stoic and serious but well-meaning, Shino is also host to a large colony of chakra-eating insects lurking in his body, as is traditional in his clan. He commands these bugs in combat, in ways ranging from cool to creepy, and everything in between. He shows almost no emotion and hardly ever smiles; this, coupled with his insects, makes him an enigma among other shinobi, and some are visibly creeped out by him.

He was a member of the Fifth Division of the Shinobi Alliance with his fellow Team 8 member Kiba. Years after the Fourth Shinobi World War comes to an end, Shino becomes a new instructor at the Ninja Academy and goes on to teach the new generation of ninjas, similar to Iruka.

Fool. Anko asked me to buy her some dango.

Kurenai is... well, a kunoichi, who has only recently become a jonin by the start of the series. We don't really learn that much about her in Part I, save that she's a rather cool and demure lady who took Hinata under her wing, skilled in genjutsu, and that she's perhaps involved with Asuma. The vast majority of her team's missions seem to not involve her. Her only plot-involved action was to get knocked around by Itachi Uchiha in a short battle unless you count some of the filler episodes.

In Part II, she appears after the death of Asuma, where we learn that she's carrying his child. She makes sparse appearances afterward, though she still thinks highly of her former students, especially Hinata. Kurenai is last seen in the epilogue with her daughter, Mirai, who goes on to become as talented as her father.

Her hobby is having evening drinks.
Favorite phrase: "Glory like a violet blooming a single day"
Advertisement:
Akamaru 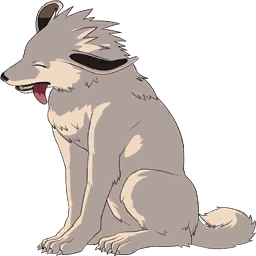 Akamaru is Kiba Inuzuka's dog. As with dogs of other members of the Inuzuka Clan, Akamaru is much more than a simple pet, being Kiba's close partner. He accompanies Kiba wherever he goes and assists him in performing techniques.