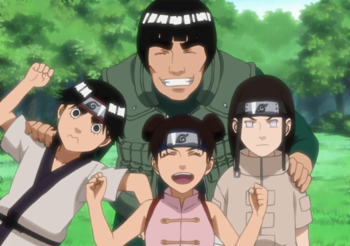 Team Guy was a team led by Might Guy and was formed a year before the other main Konoha teams of the series. They specialise in close-quarters combat with all of its members using some sort of physical attacks. Guy waited a year before entering them in the Chunin Exams, though none of his apprentices were promoted at that time.

Later, between the events of Parts I and II, Rock Lee and Tenten became chūnin while Neji Hyuga surpassed his teammates and rose to the ranks of jounin. However during the events of the Fourth Shinobi World War, Neji was among those killed in the line of duty, and later Guy suffered a permanent injury which forced him to retire after the end of the war, leaving only Lee and Tenten remaining in active duty.

I want to show I can be a splendid ninja as well even if I do not have ninjutsu or genjutsu... I want to prove it to the whole world!

In his early childhood, Rock Lee was frequently picked on by his peers because of his inability to use ninjutsu or genjutsu. He believed himself to be worthless and to have no chance at becoming a ninja at all. Then, he met Might Guy, who convinced him to train exclusively in taijutsu (physical combat), at which he became a master.

Rock Lee's first appearance in the series is one where he challenges Sasuke. After flawlessly brushing aside Naruto's counter-challenge, he proceeded to just-as-easily beat down Sasuke, before Might Guy stops him just short of a dangerous technique. Later, he tries to save Sakura from the attacking Sound Ninja in the Forest of Death, but was defeated and this helped trigger Sakura's inner change.

His has the most heartbreaking battle in the Chunin Exams. He is matched up against the psychotic Gaara of the Desert, who has never once bled or even successfully been hit with an attack. Though he puts up an extremely good fight, the strain from his overuse of the Eight Chakra Gates allows Gaara to crush Lee's arm and leg; Gaara probably would have killed Lee too, if not for Guy's interference during the exam, and Naruto's and Shikamaru's later in the hospital. This injury keeps him out of action for a long time, and is initially thought to be career-ending — it is not until much later that we see him undergoing surgery performed by Tsunade, and even later that he returns to action.

His first fight after his surgery is against Kimimaro of the Sound Five (during the Sasuke Recovery Mission arc), who he begins fighting to give Naruto time to catch up to Sasuke. Though he again puts up a good fight, his injuries still have not recovered enough to allow him his full strength. Fortunately, Gaara shows up and saves him.

Rock Lee is as fast as the human body can tolerate, and is a master of the Strong Fist school of martial arts. He also possesses the forbidden ability to open the Eight Chakra Gates, which removes the body's limits and makes him even more overwhelming, but with high risks and physical costs.

Rock Lee has a very low tolerance for alcohol, becoming a savage master of Drunken Boxing after just one sip.

In Part II, he appears in the first major arc, backing Team Kakashi up as they try to rescue Gaara from the hands of the Akatsuki. He does not do much, but he does beat a clone of himself. When the Shinobi Alliance formed divisions to fight against Akatsuki, he was placed in the Third Division under Kakashi and alongside his teacher Guy and Sakura.

By war's end, Rock Lee moves past his affections for Sakura and marries another woman. He is later seen in the epilogue taking up the mantle of his former teacher Guy in spouting the "Spirit of Youth" with his son, Metal Lee.

Additionally, he is the star of his own children's spinoff series, Rock Lee's Springtime of Youth.

All this time, I've been called a genius, so I cannot lose. I can't let down those who believe in me!

Neji is hailed as one of the foremost prodigies of his time — indeed, he is perhaps the greatest practitioner of the Hyuga's fighting style that there is. If he weren't a member of the branch family, he'd probably be heading up the clan someday. However, his pedigree combined with his knowledge of past events fills him with a seething hatred of the main family.

When Neji was young, his uncle Hiashi — Hinata's father — killed an intruder who aimed to capture Hinata. Since said intruder had some prestige in his home country, said country began calling for the head of his killer. The uncle was certain that they would attempt to steal the Byakugan's secret, but Neji's father Hizashi went in his place — first, since he had the seal, and second, to defy his clan's tradition and fight against his fate. Neji didn't know about the last part for a long time, though, and for years he resented everyone in the Hyuga clan.

Neji's life experience, at first, makes him something of a Straw Nihilist, as he constantly mentions that fighting fate is useless. Interestingly enough, this doesn't stop him from fighting his fate. He clobbers his cousin Hinata in the Chunin Exams, and is matched against Naruto in the first round of the finals. While he expects an easy win, Naruto quickly proves more resilient than he thought, ultimately defeating him. After Naruto's victory, he convinces Neji that fate can successfully be fought, marking a positive change in his character.

He later shows up in the Sasuke Recovery Mission arc, as part of the team led by Shikamaru. He engages Kidomaru of the Sound Four, who fights him using ranged attacks. He takes some serious, life-threatening damage in the process, but he manages to win.

Neji is a close-range specialist. He uses the Byakugan, which gives the user nearly-360-degree vision and the ability to see the flow of chakra in the human body, to hit pressure points, blocking off his opponent's access to their chakra. He can also create an impenetrable shield of chakra by rotating quickly; this is normally a technique reserved for the main house, but Neji reverse-engineered it.

In Part II, he is the only member of the Konoha 11 to get promoted to jounin, a further testament to his skill. He later tags along with his team to back up Team Kakashi in the Kazekage Rescue Mission arc. In the Fourth Shinobi World War, he is part of the Second Division, considered to be the Shinobi Alliance's up-close fighting division, along with Hinata, Karui, and Kurotsuchi.

Tragically, Neji loses his life during the war in trying to protect Naruto and Hinata but he dies understanding why his father did what he did and ultimately becomes a martyr for the Shinobi alliance in not giving up. His name goes on to influence the naming of Naruto and Hinata's first child, Boruto, with his grave being visited occasionally by the Uzumaki family.

His hobby was meditation.
Favorite phrase: "Flying leap" which refers to making rapid progress in something.
Tenten 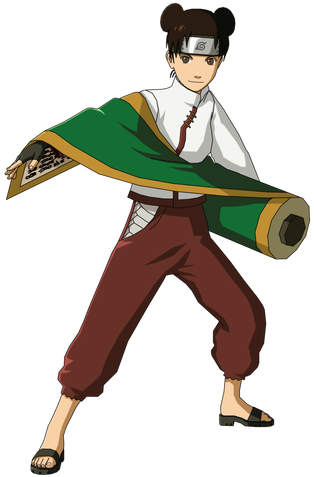 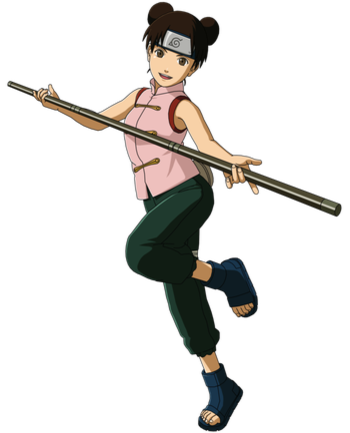 Amazing... The brilliance of the blade... the design. They're all beautiful! I want to take them all home!

Weapon specialist. Like her teammates, she is vaguely Chinese-themed. That's pretty much it.

The anime filler attempts to develop Tenten more. She seems to have an attraction to pretty boys and falls for a few. Even one that later turned out to be a girl! She also forms a comedy team with Rock Lee during a number of filler appearances, always playing the Straight Man.

In Part II, she goes with her team to help rescue Gaara. In the Fourth Shinobi World War, she was placed in the First Division under Darui and with Choza Akimichi.

After the events of the war and during the epilogue, Tenten goes on to own a Shinobi Weapons shop, though she's constantly lamenting how business is not doing well during peaceful times. 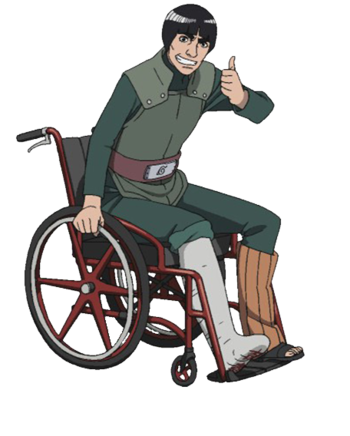 The springtime of youth has yet to fade away! Don't lose hope! We may not always be able to accomplish all the things we wish for… but if we only do the things we want to do, we'll never start… The green days of Konoha are over. The time has come to become the red beast.

Leader of Team Guy, Might Guy is the epitome of hard work. Through blood, sweat and tears, he became one of the strongest ninja there was in Konoha, becoming a rival of Kakashi in the process. He serves as both Kakashi's opposite and his Unknown Rival. Like his student, he's a pastiche of Bruce Lee.

His number one student is Lee. While their interactions are often very... odd, to say the least, it's very clear that Guy cares deeply for his student, and views him as the son he never had. He taught him how to open the Eight Chakra Gates (which isn't exactly a cakewalk).

In the first series, Guy shows up during the Chunin Exams stopping Lee from using a forbidden jutsu on Sasuke. He later saves Lee from Gaara during their fight, and later saves Shikamaru and Naruto from Gaara. He saves Kakashi, Kurenai, and Asuma from Itachi and Kisame. He also later takes Sasuke to the hospital after his fight with Itachi. And he convinces Lee to get a risky operation that would allow him to return to active duty as a ninja.

In Part II, his team backs up Kakashi's team as they try to rescue Gaara. He fights a clone of Kisame — for some reason, he doesn't remember the Akatsuki member. He opens the Sixth Gate and kicks his ass. Later, while accompaning Naruto on a hidden island in Lightning Country, he goes up against the real Kisame (again), and defeats the missing-nin in one hit by opening the Seventh Gate. Even though he didn't completely recover from the fight, he was assigned to the Third Division for the war, under his rival Kakashi, and with his student Rock Lee and Sakura.

Guy proves himself influential later in giving Naruto and Sasuke the time they need to recover and power up by facing a Ten-Tails Jinchuriki Madara in his Eight Gates form, though the resultant battle cripples Guy for the rest of his life.