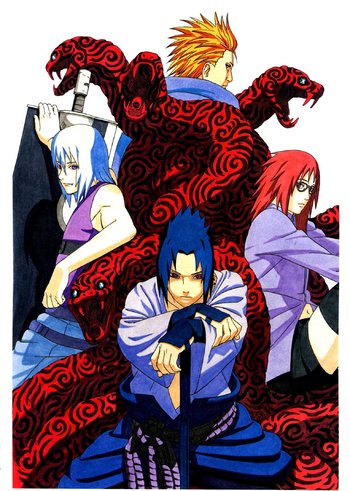 Hebi ("Snake") is the group that Sasuke forms when he's looking to exact his revenge against Itachi. They only appear post Time Skip. After Itachi's death, Sasuke renames the group Taka ("Hawk/Eagle") and they join forces with the remainder of the Akatsuki.

Although their team was originally one of necessity, they all came to respect each other as teammates and even risked their lives to protect one another as time went on, reminding Sasuke of Team 7. However, as Sasuke became more corrupt and focused in his revenge against Konoha, he abandoned Jugo and Suigetsu and, when Karin was taken hostage, he critically wounded her, and also tried to kill her to avoid any trouble with her. Karin was saved by Sasuke's former teammates of Team Kakashi and taken back to Konoha as a prisoner-of-war. While Karin states that she was finished with Sasuke and tries to escape from the Konoha prison, Jūgo and Suigetsu, not knowing what Sasuke did and tried to do to Karin, reunited with Sasuke and decided to assist him in determining if revenge or protecting Konoha was his true purpose. They were later met with Karin in Konoha, and she decided to rejoin them regardless of everything that happened in the past.

Upon Sasuke's decision to protect Konoha, everyone, including a recently restored Orochimaru, participated in the Fourth Shinobi World War and sided with the Allied Shinobi Forces. After the war, Taka permanently dissolved; Sasuke returned to Konoha and left for a journey of atonement, as well as having a family of his own, while the others returned to Orochimaru's hideout to work as his assistants.

Hebi/Taka as a whole provide examples of...

The weapon of the Seven Ninja Swordsmen has been handed down, generation to generation, it's the tradition. And... all these years I've trained, I've only done it out of reverence for the Seven Ninja. So long as I have this sword, not even you can touch me... maybe.

A former ninja from the prominent Hozuki family of Water Country. He wanted to join his brother Mangetsu as a member of the Seven Swordsmen of the Mist, but this was cut short when Mangetsu died and Suigetsu himself was captured by Orochimaru to be used for experiments. Something of A Blood Knight, as he was apparently some sort of prodigy for cutting off his opponent's limbs before beheading them, though apparently gets along with animals. Can transform into liquid to avoid damage. Takes Zabuza's sword, and wants to take Kisame's. His goal is evidently to take the swords of all the Swordsmen of the Mist in order to rebuild the group. He gets captured by the samurai at the Kage Summit, but he manages to break out of jail with Jugo.

Later he and Jugo find a scroll that could potentially threaten to change the course of the Shinobi War. It turns out that it was a method for bringing back the original Four Hokages and after reviving their previous master Orochimaru, they do just that. Suigetsu is then forced to participate in the war, alongside Team Taka.

Years later, it's revealed during the Naruto Gaiden, Suigetsu goes back to working under Orochimaru. It is unknown if he ever gave up on his dream to collect the all of the Seven Swordsman of the Mist swords.

His hobby is looking after his beloved sword.
Favorite phrase: "The lower overcoming the higher"
Karin

As long as Sasuke is happy, that's all I care about. Besides, we women have a certain camaraderie between us you wouldn't understand.

Only female in Hebi. She has long since been a subordinate to Orochimaru and has been both an experimenter and an experimentee in his Mad Scientist ventures. She has a very powerful chakra-sensing ability. She is in love with Sasuke, but rude to everyone else. She was rescued by Sasuke long ago in the Chunin Exams, which sparked the love interest. She is not shown to be much of a combatant until Sasuke's near-death during the Fourth Shinobi World War, but she can heal others by having them bite her, and survives a multi-Kage fight primarily by dodging. She is a former genin from the Hidden Village of Grass, and one of the scattered remnants of the Uzumaki Clan. After Sasuke betrays her during his fight with Danzo, she is taken by Team 7 to Konoha. She is questioned by the Interrogation Squad, bawling her eyes out over the recent events in order to manipulate her interrogators, but Ibiki prevented his less-than-hardy subordinates from playing the sympathy card for her. Karin cooperated fairly well nevertheless (after several demands of her own), but because of her criminal association, she was placed in a holding cell so the Leaf could keep an eye on her. Karin then feigned a fit towards Sasuke that ping-ponged between rage towards the betrayal and fawning over him. It was all a ruse to throw off her guards from noticing her real intentions- using a hidden razor file in the stem of her glasses to reach the lock-picking set in the picture of Sasuke she carried with her, presumably for situations such as this.

Despite her anger at Sasuke's betrayal, she forgives him as soon as he apologizes and helps Team Taka in the Fourth Shinobi World War. During the war, Karin awakens her true abilities as an Uzumaki member and is able to utilize the same chains that made Kushina so famous.

Years later, Karin's presence is brought into focus again during the Naruto Gaiden, when Sasuke's daughter, Sarada, questions whether Karin is her biological mother or not. It turns out she's not, and rather was the midwife who helped deliver Sarada when she was an infant; as such, Karin holds a soft spot for the child. She has also given up on pursuing Sasuke, noting that his happiness is more important.

Her hobby is collecting perfumes.
Favorite phrase: "A woman's desire can pass even through rock"
Jugo 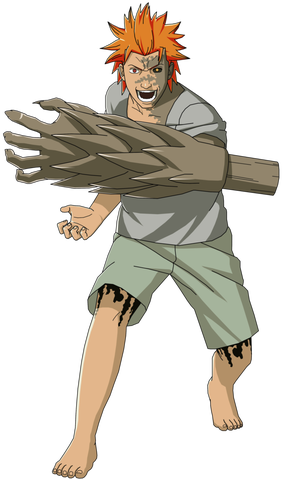 I won't let you die; you're a memento of Kimimaro.

Big guy whose personality flip-flops between Ax-Crazy and a really nice guy. The enzyme in Jugo's body causes his split personality by slowly accumulating natural energy constantly over time until it has to be released, at which point Jugo snaps into a violent frenzy. He once roamed the countryside destroying villages when he was consumed by his berserk rage, and willingly subjected himself to Orochimaru's human experimentation labs to look for a cure for his condition. He can talk to animals as well as transform his body. Orochimaru made his Cursed Seals by replicating an enzyme that Jugo's body produced. He gets captured by the samurai during the Kage Summit, but manages to break out of jail with Suigetsu.

Later he goes on to aid Sasuke during the Fourth Shinobi World War, infusing his natural Sage Powers into Sasuke's Susanoo to give him the necessary boost to combat the Ten-Tails.

Years after the war, Jugo goes back to working for Orochimaru. It is unknown if he ever got over his random psychotic episodes or if he stopped following Sasuke around.

His hobbies are forest bathing and playing with birds.
Favorite phrase: "Pure Samādhi"