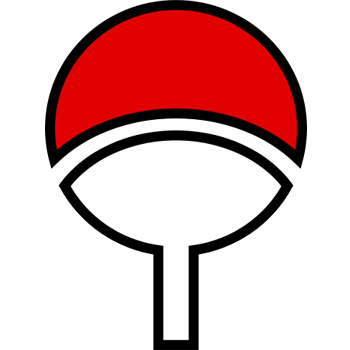 The descendants of Indra, the elder son of the Sage of the Six Paths, the Uchiha were once renowned as one of the Hidden Leaf Village's most powerful clans. Select members of the clan were particularly known for their Sharingan, Magical Eyes which gifted their bearers with incredible power.

Before the founding of the Hidden Leaf, they had an infamous rivalry with the Senju clan that spanned countless years, all the way back to the era of the very first shinobi. But one day the two clans finally signed a truce, and their leaders become the founders of the Hidden Leaf.

A few years before the beginning of the series, Itachi Uchiha, in one night, destroyed the entire clan, save one survivor: Sasuke, his younger brother who swore to avenge the Uchiha by taking revenge on Itachi.

All the Uchiha provide examples of:

Uchiha with their own pages 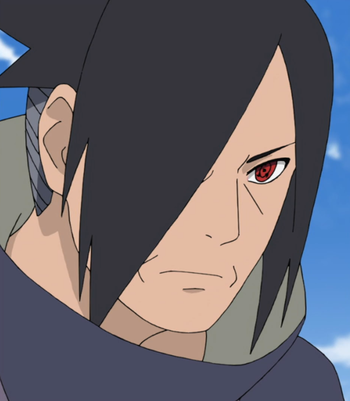 The father of Madara, Izuna, and several other Uchiha children (all of whom died). Leader of the Uchiha Clan before the founding of the Leaf Village.

The brother of Madara Uchiha, Izuna was a shinobi who died before the founding of Konoha. His great rivalry with his brother led to him being one of the first members of the Uchiha Clan to unlock the powerful Mangekyou Sharingan. Looks just like Sasuke.

An Uchiha who was around back in the time of the Second Hokage, Tobirama Senju. He partook in the fateful mission where Tobirama met his end. He appears in a flashback that Danzo has.

Itachi's best friend and role model, who appeared to have committed suicide when his duties as a shinobi became too much, though the Uchihas suspected that he was murdered by Itachi. Itachi confirms this to Sasuke, revealing that he murdered him to gain the Mangekyo Sharingan. This turns out to have been a half-lie, as Shisui did kill himself, but it was with Itachi's assistance and done specifically so that Itachi could gain the Mangekyo to kill off the clan and prevent war. He himself had an unusually powerful Mangekyo, though who died in order for him to obtain it is unknown. Itachi claims that Naruto has inherited Shisui's will. 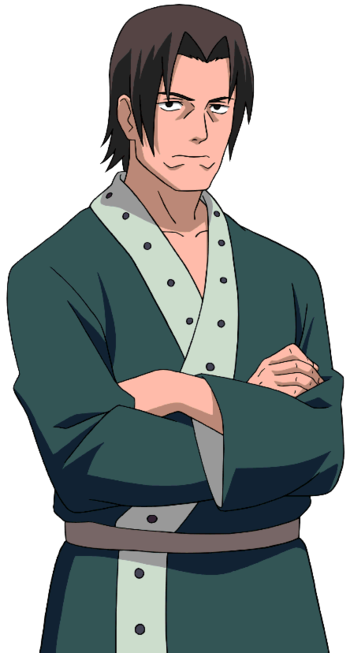 The parents of Sasuke and Itachi. Before his death at the hands of his son, Fugaku was the leader of the Uchiha Clan. Mikoto was a good friend of Kushina Uzumaki, Naruto's mother. 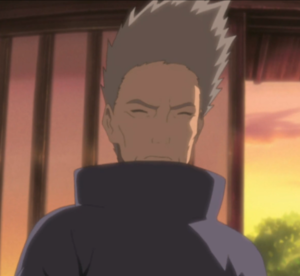 Yashiro Uchiha was a member of the Uchiha clan and the Konoha Military Police Force.

Yashiro, alongside Tekka and Inabi, went to question Itachi about his absence from the clan meeting that was kept the night before. As they questioned Itachi about Shisui Uchiha's death, presenting Itachi with Shisui's alleged suicide note telling him that they had analyzed and confirmed the handwriting to be his, he stated that he hoped that more evidence would turn up. As Itachi accosted them for their words, Yashiro cautioned Itachi that he would not go unpunished if he betrayed the clan, before being violently attacked by Itachi. As Yashiro questioned Itachi about how he had changed since becoming an Anbu, Fugaku appeared and accosted Itachi for his actions. Fed up, the three men asked Fugaku to issue the order to arrest Itachi, but after Itachi apologized, Fugaku claimed that Itachi was simply worn out from his duties and the men left. 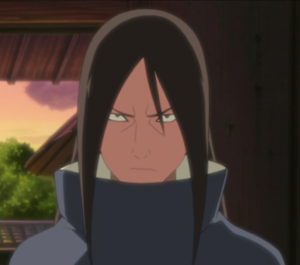 Inabi Uchiha was a member of the Uchiha clan and the Konoha Military Police Force.

Alongside Yashiro and Tekka Uchiha, Inabi questioned Itachi Uchiha about his whereabouts during the time when Shisui Uchiha supposedly committed suicide. He told Itachi that they had all intention of duly investigating the matter and when they presented Shisui's alleged suicide note, he stated that for someone who wielded the Sharingan it would be no problem to forge such a note. They then left the note with Itachi telling him to ask the Anbu to investigate the matter as well. As the men left, they passed snide, suggestive comments about Itachi's involvement in the matter which Itachi took offense to and attacked them. Fed up with Itachi, the men asked Fugaku who had just arrived, to issue the order to arrest Itachi. However, after Itachi apologized and Fugaku offered the excuse that Itachi was worn out from his other duties the men left 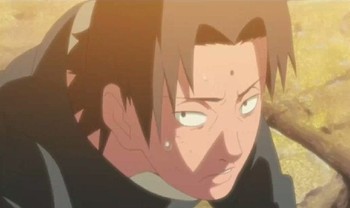 Tekka Uchiha was a Konohagakure shinobi from the Uchiha clan and an officer of the Konoha Military Police Force.

He, Inabi, and Yashiro questioned Itachi about the suicide note that was found with Shisui Uchiha. After presenting Itachi with the alleged suicide note that Shisui had written asking him to request that the Anbu investigate the matter as well. As the men began leaving, he warned Itachi not to hide anything as they also had connections within the Anbu. The men were then attacked by Itachi and fed up with him they asked Fugaku to issue the order for them to arrest him. However, after Itachi apologized and Fugaku offered up the excuse that Itachi had been worn out by his duties, the men left.