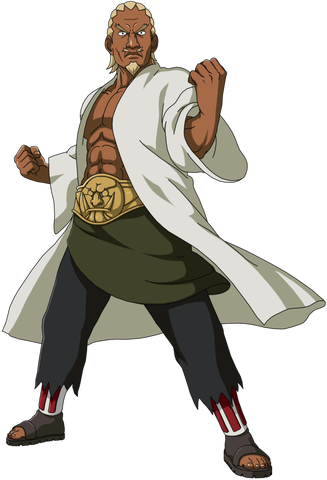 Shinobi ought not lower their heads so easily, action and power are what shinobi respect!

His birth name is unknown. Rather, he uses a Nom de Guerre: A. He is the leader of the Cloud Village and Killer B's older brother.

When he hears of Killer B's apparent demise at the hand of Akatsuki and Sasuke Uchiha, he calls a meeting of the Kages and sends Team Samui to the Leaf Village to inform them and request intel on Sasuke. While on the way to the meeting, Naruto talks to him and pleads for him to give mercy to Sasuke, but the Raikage ignores him. During the meeting he emphasizes that his village is the only one which has had no attachment to Akatsuki, but also causes a ruckus when he smashes part of the table and objects to Mifune nominating Danzo to lead the forces against Akatsuki. When Zetsu's white half interrupts with news that Sasuke is in the building, he promptly grabs him by the neck and strangles him until he loses consciousness. He then heads out with his bodyguards to confront Sasuke, and proceeds to knock Jugo unconscious and attack Sasuke even when it costs him his arm to do so, and would have killed them both if Gaara hadn't intervened.

He later goes on to serve as Supreme Commander of the Allied Shinobi Forces. He goes on to try and stop Naruto and Killer B's escape from captivity, reasoning that Jinchuuriki don't have the luxury of leading normal lives and even tries to kill Naruto to prevent Akatsuki from gaining the Nine-Tailed Fox. Fortunately his brother stops him and both B and Naruto prove to A that they're worthy of being let out to help aid in the war.

A later fights with the other four Kage in an effort to stop the real Madara Uchiha but fail due to his enormous power. He is later healed and aids however he can throughout the rest of the war.

Two years later, A reveals that his village had a giant laser gun that they use to obliterate giant meteorites that normal shinobi could not destroy by themselves. However, A, being the extremist that he is, wished to wipe out the moon in an effort to save the world, with Naruto, Hinata and the rest still on it. Thankfully he's overridden by the other Kages and his own brother.

Years after that, A gives up his position of Kage to Darui.

It's true that words can be used as tools, to lie and deceive. But when it really counts… they're also the only way to tell the truth about how you feel right here.

A high ranking Cloud-nin and the Raikage's bodyguard. He is appointed as general of the 1st Division of the Allied Shinobi Forces. He later becomes the Raikage sometime after the War.

Another high rank Cloud-nin and the Raikage's other bodyguard. He is assigned to the Sensor Division to help co-ordinate intelligence in the Fourth Shinobi World War.

One of Killer Bee's students and the leader of their three-man cell. Currently serving in the First Division of the Allied Shinobi Forces, but got sealed away by Ginkaku. She and her brother are later freed by Darui. 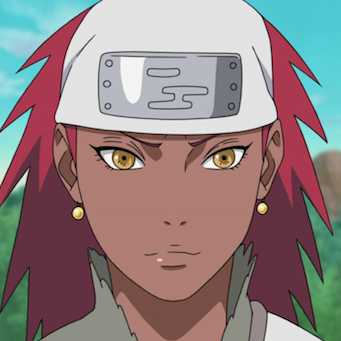 Another of Killer Bee's students, a somewhat hot-tempered kunoichi swordswoman. Currently serving in the 2nd Division of the Allied Shinobi Forces. She later moves to Konoha and marries Choji; together they have one daughter, Chocho Akimichi. 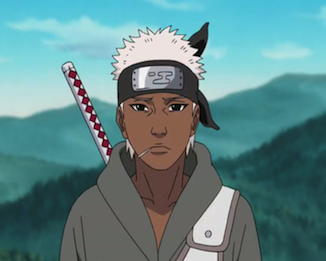 Killer Bee's third student, who worries about many things. Currently serves in the Surprise Attack Division, and helped take down the resurrected Sasori and Deidara. He goes on to become the current bodyguard of the next Raikage, Darui. 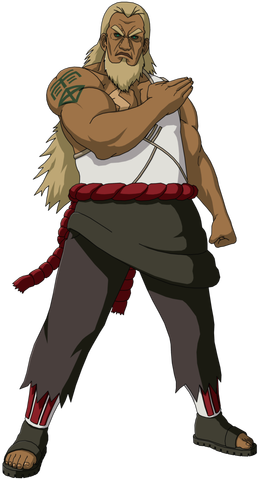 The previous Raikage, father of the Fourth and considered one of the mightiest Ninjas to have ever lived. Died during the Third War by stopping an army of 10,000 Ninjas for three days, allowing his subordinates to escape safely. Known only in flashbacks of A and Killer Bee's childhood. Revived with Edo Tensei and fighting the second front in the Fourth Shinobi World War along with Nidaime Tsuchikage, Yondaime Kazekage and Nidaime Mizukage. Faced most of the Fourth Division and was destroying them, until Naruto showed up and has a moment of opportunity that causes the Raikage to impale himself.

The man who was some sort of shinobi leader or one of lower leaders of Kumogakure. Came to Konoha under a guise to sign a peace treaty, only to abuse the event so he could gain the Byakugan. He kidnapped the Hyuga family's heir Hinata, but his plan failed, and he died a humiliating death through Hiashi Hyuga.