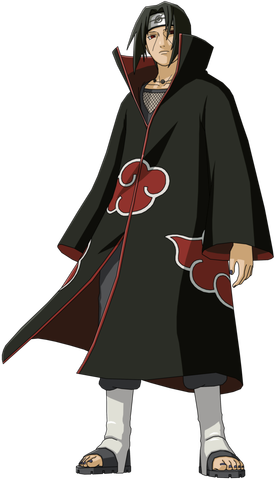 Your hate is not strong enough.

Sasuke's Aloof Big Brother is the Akatsuki member with the most screen time to date (not сonsidering Tobi). He was believed to have killed his closest friend in order to gain the Mangekyo Sharingan, a more advanced form of the Sharingan with several unique abilities. He then proceeded to kill the entire Uchiha clan save Sasuke for reasons of his own, then abandoned the village to join Akatsuki.

Onscreen, he rarely moves and rarely speaks, but he's too good a fighter for even high-level ninja to take on. He was a prodigy as a child and has only gotten stronger since. He is an expert at genjutsu, is a master of the Fire-Style Techniques of his clan, and knows most of Konoha's signature jutsu, such as the Shadow Clone Jutsu; Itachi, uniquely, has demonstrated the ability to detonate his clones as an offensive technique when he no longer needs them. In addition, the Mangekyo Sharingan gives Itachi three extremely powerful but draining jutsu with which to fight: Amaterasu, a black flame hotter than the sun which can burn anything, even other flames; Tsukuyomi, a genjutsu which can bring its target to complete mental and physical collapse by tormenting them for what seems like days in just a few seconds; and Susano'o, which summons a massive ethereal warrior which can attack and defend on Itachi's behalf. The new abilities the Mangekyo gives come with a price, however. Extended use causes the user's eyesight to fade, eventually resulting in complete blindness. The only way to combat this is to create a permanent Mangekyo Sharingan by replacing the user's eyes with his brother's.

His only appearance in the original series was directly after the Chunin Exam arc, when he appeared in Konoha with his partner Kisame to capture Naruto. He and Kisame easily defeated Kurenai, Asuma, and Kakashi, but retreated rather than become involved in a general melee. When Sasuke heard his brother was in the area, he immediately rushed out to challenge him, but Itachi easily beat him and Mind Raped him in the process, further feeding Sasuke's inferiority complex. After Jiraiya chased the Akatsuki off, Itachi was ordered not to attempt to capture Naruto again until after the Time Skip.

In Shippuden, Pain creates a clone of Itachi to serve as a delaying action during the Rescue Gaara arc. Team 7 beats it, and Itachi doesn't appear again until directly prior to his fight with Sasuke, where he briefly confronts Naruto, force-feeding him a crow containing one of his friend's Sharingan before leaving to duel his brother. He claims that he left Sasuke alive because he wanted to take Sasuke's eyes for himself. However, Itachi dies from a terminal illness before he can kill Sasuke. More about his character and his relationship with Sasuke is revealed after his death.

His hobby was visiting traditional Japanese cafés.
Favorite word: "peace"
open/close all folders
A - F
G - L
M - R
S - Z
"If I had come to you from the start, looked straight at your eyes and told you the truth, then I wouldn't have had to stand before you as a failure, telling you all of this. But I want to impart at least this much truth to you... You don't ever have to forgive me. And whatever you do from here on out, know this... no matter what, I will love you always."
Feedback