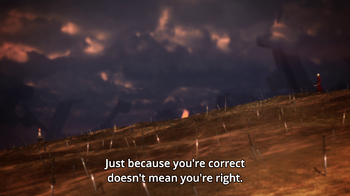 Sometimes, a dramatic moment in an anime series can be ruined through the absurdity of the situation (or inappropriately-used English).

Often times, a piece of dialogue will be perfectly fine in its original Japanese form, but will unfortunately become Narm once it is translated into English, especially in anime dubbed in Western languages using the same tone of voice as Japanese. Japanese is a rich sounding language, but it sounds relatively monotone compared to Western languages, particularly when people speak for long stretches. Many dubbing companies leave the monotone in, especially in dramatic anime, leading to the existence of many of the examples below.

Note: if it only appears in the manga, then list it in the section for manga.

A few series have had so many such moments that they've been given their own pages: