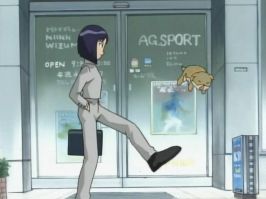 Oh my god, his foot altered that puppy's gravitational pull! OH, THE HORROR!
The various Digimon animated series are generally marketed towards younger children, so one should not fully expect the show to take itself entirely seriously... except for those times when it wants to be.