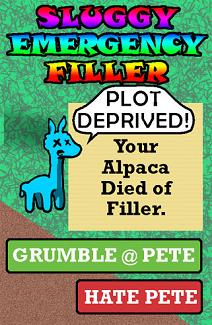 The end result of Schedule Slip.
Sakura: So, did we even do anything this episode?
Kakashi: Sakura, welcome to the wonderful world... of filler.
Everyone: Nooooo!
— Naruto: The Abridged Series

Filler episodes are entries in a generally continuous serial that are unrelated to the main plot, don't significantly alter the relations between the characters, and generally serve only to take up space. This could be considered Padding (the addition of scenes to lengthen a story) applied to a whole franchise by creating brand new episodes.

They are extremely common in Anime, where many shows have 26 or more episodes per season. The producers have to use filler just to meet contractual demands. Filler is usually something entirely original for the anime, but not always; many manga — particularly weekly manga — employ filler just as ruthlessly due to the extreme deadlines. Sometimes entire filler Arcs are created, most often because the series Overtook the Manga. Just about every long-running manga-based anime action series will have gargantuan amounts of filler over time. This is because Japanese networks, unlike Western ones, don't do reruns or season breaks. This is compounded when they go beyond the 26-episode mark. Many series air over 40 episodes per year, when they would have a hard time making even half of them related to the main plot.

In most cases, the defining aspect of filler is the lack of series momentum. Filler can be safely ignored without any loss of important information. However, there is also a style of filler called the "single upgrade filler". This uses a filler episode to introduce a new power, machine, costume, minor character, etc. without having to work it into the greater narrative. In these cases, the episode can be ignored outside of "something got an upgrade".

The term "filler" is also used by fandom to refer to anything that isn't in the source material. This stems from the practice mentioned above of adaptations that are threatening to catch up to the source using original story arcs, episodes, and general content to pad things out. That is not this trope, see Overtook the Manga or Adaptation Expansion, but such cases are often related to it.

The Wacky Wayside Tribe is a common form of filler in quest narratives. When the show splits to follow two or more characters, and one of them is engaged in filler-type activities while the others are doing important things, it's Trapped by Mountain Lions. A Lower-Deck Episode can end up as filler if badly done. When the filler is just flat-out bizarre, it's a Bizarro Episode. If you need filler badly enough, clips of previous episodes can be hacked together into a Recap Episode.

Compare Standalone Episode, Breather Episode and Out-of-Genre Experience. When the news media is forced to resort to this, it's Silly Season or Sweeps.