This is the character sheet for the anime and manga series Chrono Crusade. Unmarked spoilers ahead, in order to make the page read a little better. 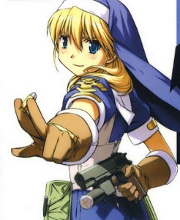 The Heroine and protagonist of the series (although you could make a case for Chrono being that), Rosette is a young exorcist with the Magdalan Order. Her talent with a gun is only matched by her talent for destroying things and getting into trouble. Although she has a hot temper and a loud mouth, underneath it all she's a genuinely caring person that wants to live her life to the fullest. 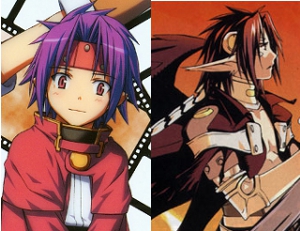 Chrono is Sister Rosette's assistant and childhood friend. Although he appears to be a young boy of about twelve, he's actually a demon whose powers have been sealed away. The few that know what he really is tend to distrust him because of it, but he's a caring, lovable person who tends to get dragged into Rosette's messes. He and Rosette tend to have clashing personalities, but when it comes right down to it, she's the most important person in his life and he'd do anything to protect her. 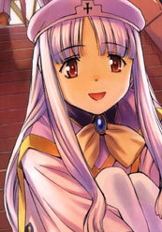 A meek probably-albino Portuguese girl who was saved by Chrono and Rosette when her adoptive father attempted to use her holy powers for his own evil ends. Her abilities have brought her nothing but misfortune, which has led her to dislike them and caused her significant self-esteem issues. She admires Rosette and wants to grow up to be strong and confident like her. 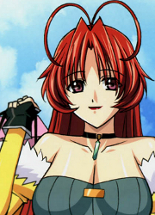 A prideful and elegant Bounty Hunter, Satella is the last to join Rosette's True Companions. Calling herself a "jewel witch", she's unaffiliated with the Order but ends up getting dragged into Rosette's mission once they cross paths. The heiress to a vast fortune, Satella starts off looking down at the Order's ways but soon starts to appreciate them more. She's cold and driven, but starts to open up to the others as they travel together. 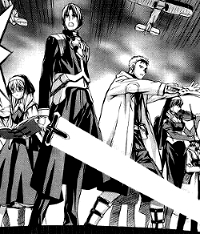 Kicking ass for the Lord.

The Magdalan Order is a Christian organization dedicated to protecting people from demons. Although most of the members are humble servants of God, it's obvious that the Order is a powerful organization with the latest in technology and magical knowledge. They're connected enough that they can clean up Rosette's messes and keep her out of trouble with the law and the press.

Rosette's superior in the Order. At first she comes across as aggressive and strict – particularly when dealing with Rosette, who tries her patience – but she's actually rather sweet if you show her common courtesy. It's clear that she loves her job and wants to protect people, but she can sometimes take a harsh approach to do it. Later in the series she shows a more thoughtful side as she grapples with the approaching darkness. 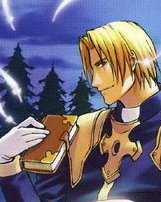 Father Ewan Remington is a member of the militia and Rosette's guardian. He was the one that originally asked her to join the Order, and takes the role of a father and mentor in her life. He's typically cheerful and carries himself with a cool sense of confidence, but when it comes time to fight he can be a deadly warrior. Whereas Sister Kate is strict and goes by the book, Father Remington often encourages Rosette to be a little more creative with how she solves her problems. He also spoils her rotten.

Currently plotting his next panty raid.

The inventor of much of the high-tech equipment and ammunition the Order uses. Earlier in the series he functions mostly as comic relief, creating wacky devices and behaving like an old pervert towards the nuns in the Order, but he does have a serious side which occasionally shows itself, and he's obviously a genius. He's taken Chrono somewhat under his wing and often stands up for him when others in the Order show distrust toward him. 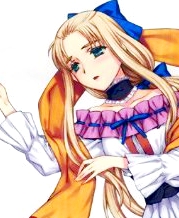 A mysterious figure that's highly regarded by the Order, Mary was a holy woman that lived during the later half of the 19th century. She seems to have a connection to Chrono's past, although her story isn't told until later in the story. 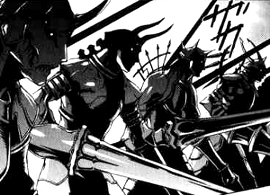 The race of supernatural beings that the Order fights against and that Chrono belongs to. Their origins and goals differ depending on whether you're following the manga or the anime, but both versions seem to be filled with proud warriors that look down upon humans and consider them tools at best. 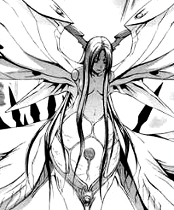 Pandaemonium is both the name of the Queen of the demons and the name of their home world. There's very little that humans truely know about her, but she seems very important to Aion's plans. 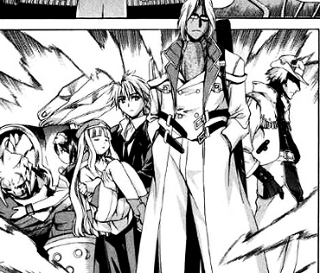 Everybody pose for the family photo!

A group of demons lead by Aion, that Chrono used to be a part of. They seem to be at odds not only with the Order, but with other demons. 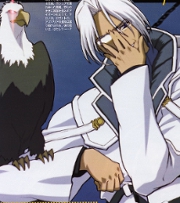 Are you tempted yet?

The Leader of the Sinners and the Big Bad of the series, Aion is a demon with ties to Chrono's past who is now at odds with him. He's charismatic and smooth, but calculating and secretive. Since so much about him was kept a secret until later in the series, his personality and goals change drastically depending on if you're following the manga or the anime. 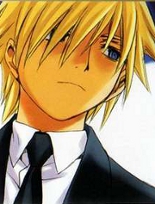 He'll only be this calm for about a minute, so think fast.

Rosette's younger brother. As a child, Joshua was granted with a holy power that allowed him to heal others, but at the cost of his own health. Desperate to become stronger, Joshua accepted Aion's offer to wear Chrono's horns on his head—a gift that grants him incredible power, but at the cost of his sanity. Although fragments of his original cheerful, optimistic personality remain, his weak sanity and Aion's manipulation has twisted him into a childish, impulsive brat. He's wildly devoted to Aion, but greatly misses his sister. 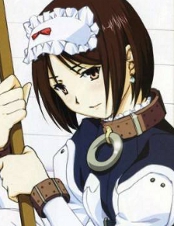 She could probably kill someone with that mop.

A quiet girl who serves as Joshua's maid. Although very stoic and polite, glimpses of a loving, devoted young woman can be seen behind her mask of stone. She tends to be a pushover, but God help you if you threaten Joshua—she's as devoted to him as he is to Aion. 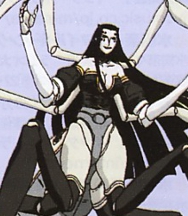 The first member of the Sinners that Chrono and Rosette confront directly, Rizelle is a demon known as the "Puppetmaster". Although she can fight when cornered, she prefers to manipulate humans like puppets and use them to do her dirty work. She's desperate for attention from Aion. Unfortunately for her, the battle with Pandaemonium resulted in her losing her arm and everything below her waist, so she's stuck as a cyborg-spider-thing. 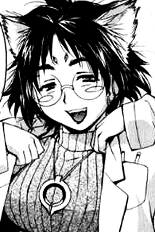 Every anime needs a Cat Girl. No exceptions.

An energetic Cat Girl demon that functions as the Sinner's techie. She rarely fights and prefers to stay on the sidelines—as she says, she "fights with her brain, not with her fists." In the manga she's very affectionate towards the other Sinners and seems to genuinely miss and worry about Chrono, but in the anime she has quite a sadistic streak. 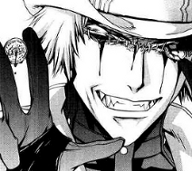 A rough and tumble member of the Sinners who seems to style himself as some sort of cowboy. Genai is rude, crude and misoginistic. He not-so-secretly has a flame for Rizelle, so he's very bitter and angry towards anyone that had to do with her running off to confront Rosette. 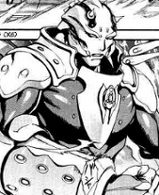 Okay, so you can't really blame Gonzo for thinking he should be a mindless fighting machine.

The muscle of the Sinners. In the manga he's extremely loyal to Aion, but often serves as a voice of reason to the other sinners, and is portrayed as being something of a bookworm. In the anime, he...likes to punch things. And that's pretty much it.