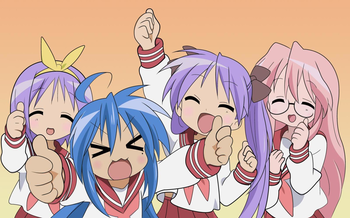 Imagine Azumanga Daioh meets Seinfeld, on even more barbiturates with a fair helping of Otaku Bait.

Lucky Star is a Slice of Life manga by Kagami Yoshimizu, mainly focusing on four high school girls: Konata Izumi, an Otaku Surrogate whose knowledge of Japanese pop culture is truly staggering; her sarcastic and down-to-earth best friend Kagami Hiiragi; Kagami's meeker and more Book Dumb twin sister Tsukasa Hiiragi; and the wealthy and intelligent Miyuki Takara. Lucky Star is more or less a series about nothing in particular, focusing more on the characters' everyday lives and the ordinary conversations they have than any overarching plot, though the anime also utilizes a lot of Shout Outs and references to Otaku culture. Notable for being the largest example of the Puni Plush style and its rather eccentric fanbase.

The manga began serialization in Comptiq in 2003, and went on hiatus in 2014 until it came back to serialization in 2022, moving to the magazine Mitaina!. Kyoto Animation used the manga as the basis for a highly successful anime series in 2007, which got acquired for American distribution by Bandai Entertainment, and dubbed by Bang Zoom! Entertainment with around the same casting as Haruhi Suzumiya... or some of the in-jokes would not be translatable at all. Most of the Otaku references were in fact KyoAni's own additions (the original manga was mainly a by-the-book Slice of Life), in order to cash in on the merchandising of anime in general, mainly from Haruhi. It worked; Lucky Star was one of the studio's most marketable shows, with many CDs and video games being made even 3 years after the anime ended. A stage musical adaptation was green-lit in 2011.

There have been several spin-off mangas. The first, Lucky Star Pocket Travelers, was later created and features the four main characters for no discernible reason whatsoever shrunk down to a few inches tall. Cue hilarity. A different bizarre spin-off, Boo Boo Kagaboo, was made by the creator of Nyoron Churuya-san. It was licensed by BANDAI, but they later cancelled its release. Another spin-off manga, The Miyakawa Familys Hunger/Miyakawa Ke No Kuufuku, was created in 2008, written and illustrated by Kagami Yoshimizu himself, starring Hikage and Hinata Miyakawa, two minor characters from the manga (who also briefly show up in the anime) who have money troubles and thus have trouble keeping food in the house. Hinata, however, is an avid otaku, and her impulse-buying tendencies only worsen their money troubles, much to Hikage's chagrin. An ONA adaptation was produced by Ordet in 2013 for the Spring season.

The anime was originally available on Crunchyroll,

until the licence expired in August 2014 and it was removed along with Nichijou.

Not to be confused with the 1929 film Lucky Star, the 1950s series The Complete Adventures of Lucky Starr, a 1983 song by Madonna, a Paper Mario item, one of the "Chinatown bus" lines operating between Boston and New York City, or anything else named as such.