Eccentric Mentor
aka: The Dumbledore 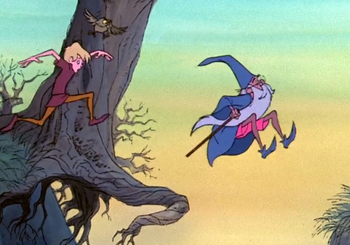 "Come, boy, let's test this gravity thing I've heard about!"
"Is he — a bit mad?" asked Harry uncertainly.
"Mad?" said Percy airily. "He's a genius! Best wizard in the world! But he is a bit mad, yes."
— Harry Potter and the Philosopher's Stone, regarding Albus Dumbledore
Advertisement:

The Eccentric Mentor is an apparent contradiction, a sagacious figure who seems eccentric and possibly foolish; a font of power and respectability who acts like comic relief. Typically the Eccentric Mentor is an older male character, connected to the back story, who acts as a mentor, protector, and/or guide. They often feign senility and weakness when it is useful to do so, and rarely take pains to avoid such an appearance if it requires effort. Their eccentricity may show itself even in visual appearance, including a quirky clothing style and an aversion to shoes.

When pushed, the Eccentric Mentor easily demonstrates how they have earned their status. Those who underestimated them are suddenly confronted with heroic badassery, Sherlock Holmes-level insight, moral fortitude in the face of death, and/or staying a step ahead of everyone else. Due to their age, wisdom, and conviction, they fear death far less than a loss of integrity.

Combines aspects of Cool Old Guy, The Mentor, Old Master (sometimes), Crouching Moron, Hidden Badass, Bunny-Ears Lawyer, often Cloudcuckoolander, and Zen Survivor into one cranky, tough old biscuit. If they are an authority figure, they are The Wonka. May overlap with Loon with a Heart of Gold, if they are not villainous. They may fill any of a number of mentor roles, such as Trickster Mentor or Reasonable Authority Figure, related to their personality and their role in the story. As such, no matter how much power they have, they want the heroes to solve the problem. Mentor Occupational Hazard will likely happen at some point. Compare Simple-Minded Wisdom, when a "simple" (uneducated or mentally handicapped) character displays uncommon wisdom.

Although much less eccentric after he came back to life. Though he does pretend to be old and feeble to trick the guards of Meduseld into letting him keep his staff (which he refers to as his "walking-stick") when going in to see Théoden. It works, too, though it's implied in the film (and all but stated in the books) that Háma sees through the ruse, but lets it go anyway because he believes (correctly) that the visitors can help. What is almost completely left out in the movies is that Gandalf also likes to give the impression of himself as an unpredictably dangerous powerhouse. Frodo, who has known him for decades, is at one point genuinely afraid that Gandalf had burned poor Barliman Butterbur to death for failing to deliver a crucial letter. Also, when Frodo refuses to answer to his knocks, he threatens to blow Bag End's door in, and all the way through the Hill.