Warrior Cats Main Character Index
ThunderClan (Leaders and Deputies | Medicine Cats | The Three and Their Allies | Warriors and Apprentices | Other ThunderClanners) | ShadowClan | RiverClan | WindClan | SkyClan | Tribe of Rushing Water | Others | Dawn of The Clans
"Only some leaders and medicine cats are remembered by the Clans. Their names cast long shadows over the forest; their deeds-good or evil-are told and retold by each generation until they pass from history to legend. Of the others, the ones whose names and deeds have been forgotten or, in some cases, banished from living memory, only StarClan knows."
—Secrets of the Clans

Over the course of Warrior Cats, ThunderClan has seen a variety of leaders and deputies. Some were brave heroes, while others were cowardly fools. As long as there were cats to lead, the leaders would come.

Due to the series' spoiler-filled nature, including Spoiler Titles and even character names, all spoilers aside from the newest main-series book and side book may be unmarked.

"Surely it is our struggle against hardship that makes us true warriors. You think fresh blood in the Clans will weaken us? A life without hardship will weaken us more." 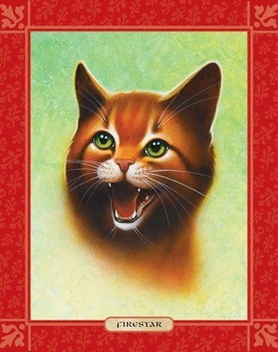 "Just remember, the final responsibility is mine. You don't hold the whole Clan in your paws. I just need you to do what you can. I'll take care of the rest."

The protagonist of the first six books, and a major character in most later books. He was originally a kittypet, but was accepted into the Clan after feeling mysteriously drawn to the forest his whole life. His name comes from his fur, which is bright orange. He originally faced prejudice due to his non-Clan heritage, but has long since proven himself a brave and highly capable warrior. From time to time, however, his leadership decisions (in particular, letting more non-Clan cats into ThunderClan, as well as interfering in other Clans' business) have been a source of controversy among the Clans.

"I don't think I'll ever be free of him. Even now that he's dead, no cat will ever forget that I'm his son." 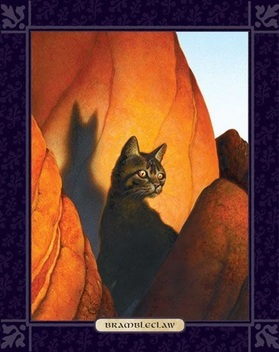 One of the protagonists of the second series of books, Brambleclaw is the son of Tigerstar, something which causes him a great deal of angst. He is determined to continually prove himself a loyal and virtuous warrior. He was chosen by StarClan to be one of the cats to journey to Midnight and find a new home for the Clans, and currently holds the position of deputy of ThunderClan. Trained in The Place Of No Stars during the events of Warrior Cats: The New Prophecy. Succeeds Firestar as ThunderClan leader in The Last Hope, and stars in his own Super Edition, Bramblestar's Storm.

"And I'm sick of you flapping your wings like an injured sparrow, feeling oh so sorry for yourself. You're not the only cat suffering. Your pain isn't the hardest to bear." 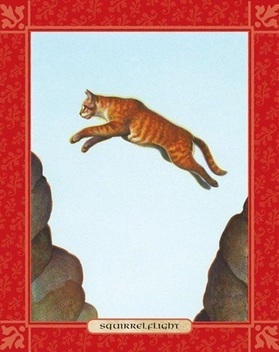 "All cats deserve to find happiness as a mate, and as a mother."
Click here

Another second series protagonist, and Firestar's daughter. Originally a hot-headed young cat, she has matured into a capable and strong warrior. She goes on the journey with the four chosen cats in the second series, despite not being chosen herself, and during that time develops into Brambleclaw's Love Interest. In The Last Hope, she is named the deputy of ThunderClan under Bramblestar. In The Silent Thaw, she is exiled from ThunderClan by Bramblestar's impostor.

"The strength and fellowship of the Clan will always be with you, even when you hunt alone." 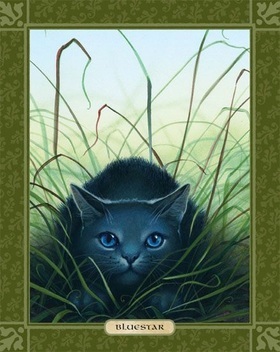 "I was promised long ago that fire would save the Clan. It has never needed saving as much as it does now."
Click here The leader of ThunderClan during most of the first series, and Firestar's mentor. She is highly respected as a wise and powerful leader, even by cats of other Clans. She is tough but fair, and fierce in battle. Her only real problem is her unwavering trust in Tigerclaw, whose betrayal shocks her so deeply that she becomes paranoid and insane, and turns her back on StarClan. She gets better... just before her death. Currently resides in StarClan, but refuses to stop meddling with the affairs of the Clans.

"No cat ever had such a friend as you. I'd give my life for you, you know that." 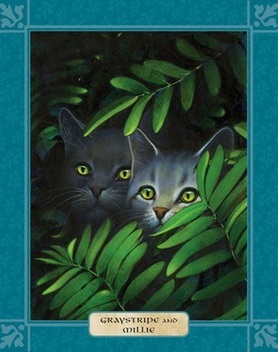 "A warrior stands and fights."

Firestar's best friend, and former deputy of ThunderClan. Graystripe is a good-natured, easy-going cat who gets along well with everyone. Gets his own big source of drama when he falls in love with the RiverClan warrior Silverstream, and fathers two kits with her. He temporarily joins RiverClan in order to be with them, but his conflicting loyalties eventually lead to his rejoining ThunderClan.

"I believe we can choose our territories and lay down borders fairly, in peace."
"Unite or die! If we are to survive, we must act together. This dispute must be ended with words, not deeds."

ThunderClan's legendary founder. For more information on him, see Warrior Cats: Dawn of the Clans.

“Eventually this bold apprentice became a great leader known as Owlstar. In the hunt, he was as silent and deadly as the tawny owl."

ThunderClan's second leader. At a young age, he snuck out of camp and learned the ways of the owl, which he incorporated into his own fighting style. He's also listed as Owl Eyes in the Warrior Cats: Dawn of the Clans page. 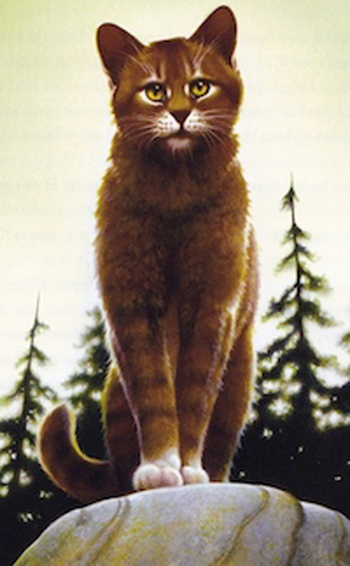 "StarClan gave each Clan the skills they need to survive in their own territory."

The leader of ThunderClan when SkyClan was driven out.

"Have you forgotten Appledusk murdered my son and Flowerpaw? Of all cats, why did you have to choose him? You cannot possibly expect my forgiveness. You have betrayed the warrior code and lied to your Clanmates. We will not raise these kits within the walls of our camp, nor the boundaries of our territory. Take them and leave. You are no longer a warrior of ThunderClan."

The leader of ThunderClan when Mapleshade was alive. He was the father of Pinestar and grandfather of Tigerstar.

"WindClan? They'll forgive us for the attack, then hate us for some other reason. The four Clans will be enemies until the end. And yet we all want the same things: prey to hunt, a safe territory to raise our kits, and peace to share dreams with our ancestors. Why must we hate one another over such simple desires?" 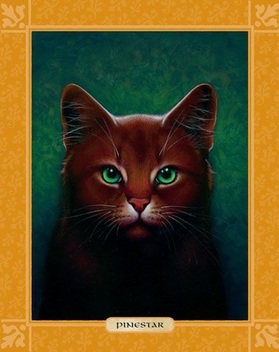 "With this life I give you compassion. Judge as much with your heart as with your mind."

The leader of ThunderClan at the beginning of Bluestar's Prophecy. Fathers Tigerstar, and is succeeded by Sunstar.

Bluestar's leader for much of her life. He's a level-headed and respectful leader, and acted as a bit of a father figure to Bluestar, whose father didn't pay much attention to her.

"If we agree to their demands, these rogues will think we're weak, and they'll keep pushing us around!"

ThunderClan's first ever deputy. However, he did not succeed Thunder as leader. Instead, Thunder was succeeded by Owleyes, who became Owlstar. Also see him under 'Lightning Tail' here.

"What sort of warriors would we be to pull off such a fox-hearted trick?"

Sunstar's first deputy. He was forced to retire to due a disease. He's also Darkstripe's father.

"With this life I give you justice. Use it well as you judge the actions of others." 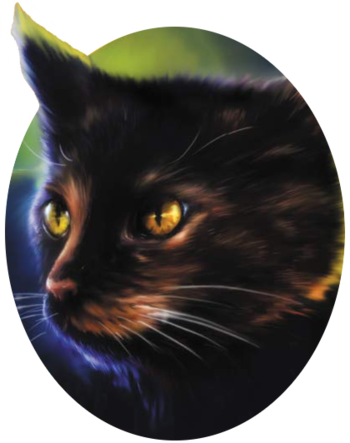 "Thank you. You revealed the truth when no other cat could."

Bluestar's deputy at the beginning of Into The Wild. He's the father of Sandstorm.

"You cannot live with a paw in each world."
"No! I will not lie for you! You might not want to be our leader anymore, but you could at least be brave enough to tell the Clan yourself. They deserve to know the truth.."

A senior warrior and Graystripe's mentor. Dies in the first book, Into the Wild.

"I am no medicine cat. I cannot read the stars like Yellowfang or Cinderpelt. But I have always trusted my warrior ancestors to do what is right."

"I've been proud to serve as your deputy."

Bluestar's nephew, and one of the more well-respected warriors in ThunderClan, he remained a good friend to both her and Firestar. He also served as Firestar's first deputy. He is killed by Bone in The Darkest Hour, but he still watches over the Clans from StarClan.