Warrior Cats Main Character Index
ThunderClan (Leaders and Deputies | Medicine Cats | The Three and Their Allies | Warriors and Apprentices | Other ThunderClanners) | ShadowClan | RiverClan | WindClan | SkyClan | Tribe of Rushing Water | Others | Dawn of The Clans
"I've served my Clan for a long time, and it's nice to finally have some peace and quiet. I hope I get to stick around and enjoy it for many moons to come."
—Goldenflower, Secrets of the Clans

The Clans are made up of much more than warriors. One must always remember the elders that tell tales of the past, the queens that bring new cats into the Clans, and the kits that will one day become the future of the Clans.

"The day I stop hunting, Weedwhisker, is the day you can sit vigil for me."

One of the elders from before Firestar's time. Despite his age, he still hunts for himself and the other elders.

"A good warrior learns from his Clanmates."

A ThunderClan warrior who was forced to retire to the elder's den after the WindClan battle. He was Bluestar's first mentor and she named her son, Stonefur, after him.

"You see that nick in my ear? I got that when I was an apprentice. An owl swooped out of nowhere. But I bet my claws left a bigger scar than this!"

A ThunderClan elder in the first arc.

"Well done for bringing WindClan home! You must come and share the story with the elders' one night."

One of ThunderClan's elders, Halftail is always ready to show kindness to newcomers. When he was younger, he was a warrior named Sparrowpelt, and he mentored Snowfur and Redtail. After losing half of his tail to a badger, he retired because he couldn't balance properly with only half a tail. He dies of smoke inhalation in Rising Storm.

"I was already old when they changed my name to One-eye, and to be honest I don't care what they call me so long as they bring the fresh-kill on time." 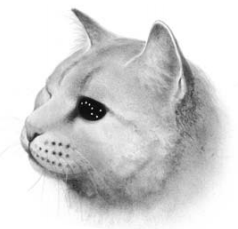 The oldest cat in ThunderClan in the original series. She's nearly blind and deaf, and only has one functional eye.

"If we can't trust StarClan, then we are lost."

A ThunderClan elder from the first arc.

"Patchkit, I already see your father's courage shining in your eyes."

A ThunderClan elder from the first arc. He's Graystripe's father.

"Not many cats get to be deputy, so don't miss out on other things while you're waiting."

A ThunderClan she-cat first introduced in Into the Wild. She gets a little more screen time in Bluestar's Prophecy. She also happens to be Thistleclaw's sister.

ShadowClan's former leader, who became a rogue after he was defeated by Yellowfang and Firestar. In Fire and Ice, ThunderClan makes him join their Clan as an elder, but he turns on them, as expected. For more information, see here.
Longtail

"It'll be okay. You're my apprentice now, Swiftpaw."

"I'm sorry, Fireheart. I think you're talking sense, but that's not the point. The warrior code isn't something you stick to just when you feel like it. I don't think I could disobey my leader if she ordered me to attack."

A ThunderClan she-cat. At the beginning of Into the Wild, she is a young and strong warrior. While most of the ThunderClan cats from Into the Wild die by the end of the first arc, she manages to survive and is one of the Clan's oldest warriors. During The New Prophecy, she joins Longtail in the elder's den and becomes a cranky old she-cat.

"When the thaw comes, you'll get wet. Like you do every leaf-bare...Cats that live wild get wet. Not even your StarClan can change that."

An old cat who shows up from time to time in order to help the heroes. A member of ThunderClan as of Sunrise. He enjoys telling long-winded stories and claiming that he used to have great hunting and fighting skills.

"He said I was very brave, and a really good swimmer!"
Mapleshade and Appledusk's son, who ended up drowning in the lake.
Nightkit and Mistkit

Tigerstar's sisters. They die within a moon after their birth.

"Believe in your Clan and in yourself. Never doubt that you know the right path to take."

Bluestar's other daughter, who died when she was being taken to RiverClan.

A kit in A Dangerous Path. He is deaf, which leads him to be carried off by a hawk.

The deceased son and daughter of Brambleclaw and Squirrelflight, and siblings to Alderheart and Sparkpelt.

"Will Sparkpelt be joining us soon?"

The other son of Sparkpelt and Larksong, who died at birth.

"You have sacrificed so much. And our Clan walks a safer path now. With this life, I give you pride, so that you may know your own worth and the worth of your Clan. Thank you for raising Whitestorm. You were chosen long ago, and StarClan has never regretted its choice."

"Why can't he be a warrior? There's nothing else wrong with him. He's a good, strong kit. He gets along just fine if you signal what he has to do."

The leader of the Nursery in the first arc. She is fiercely protective of all the kits of ThunderClan. Mother of Snowkit, Lionheart, and Goldenflower.

"With this life I give you protection. Use it well to care for your Clan as a mother cares for her kits."

One of ThunderClan's queens; mother of Ferncloud and Ashfur, and according to Word of God, Sandstorm. Fiercely devoted to protecting the kits who will one day become warriors, she battles tooth and claw against enemies, even when she's pregnant. After losing two of her kits to sickness, she adopts Cloudtail and cares for him like her own.

"We don't raise kits to fight in unjust battles."

"I understand how you feel. Your eyes have always betrayed your heart. But these are my kits, and I will die to protect them if I have to. I'm afraid for them, Fireheart. The Clan will never forgive Tigerclaw - nor should they. But Bramblekit and Tawnykit have done nothing wrong, and I will not let them be punished because of Tigerclaw."

"What should we do? We can't let the forest be overrun by foxes! What about my kits?" 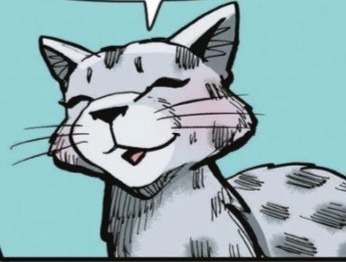 "I am no warrior, but I am a ThunderClan cat. I stay in the nursery rather than hunt and fight because that is what I do best. I care for our young as though each kit were my own. That is my gift to the Clan, but I do it in my own chosen name." 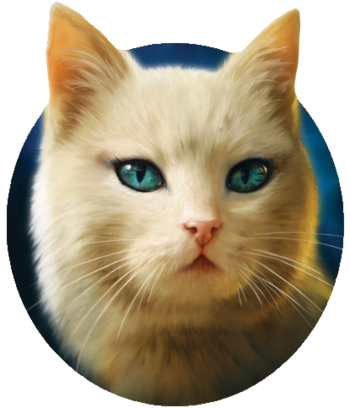 A cat who lived in a barn by the lake territory, she and her kits join ThunderClan to avoid being separated by their owners. Although Firestar allows it, many in the Clans aren't happy about this, as Daisy shows no interest in becoming a warrior, to the point of refusing a warrior name when one is offered. She mainly stays in the nursery helping queens raise their kits. Mother of Berrynose, Mousewhisker, Hazeltail, Rosepetal, and Toadstep.