Warrior Cats Main Character Index
ThunderClan (Leaders and Deputies | Medicine Cats | The Three and Their Allies | Warriors and Apprentices | Other ThunderClanners) | ShadowClan | RiverClan | WindClan | SkyClan | Tribe of Rushing Water | Others | Dawn of The Clans
"Welcome. I am Tallstar, and this is WindClan—a Clan that has known great suffering, but always survives. We are the fleet-footed warriors of the moor, the fastest Clan in the forest. We have struggled through terrible hardship, but we never give up. I know the other Clans sometimes see us as weak...but the truth is, they could not last a moon in the broad, open spaces we live in, chasing rabbits for prey. We are the closest Clan to StarClan, spiritually and physically, and we always know our warrior ancestors are watching over us. That is what makes us strong. No matter what trials we must endure, WindClan will last forever."
—Tallstar on WindClan, Secrets of the Clans

Although initially introduced in Warrior Cats as a Clan defeated and exiled by Brokenstar, WindClan has done more than enough to make up for this early bout of weakness. With their unmatched speed and relentless tactics, WindClan are invaluable allies and horrifying enemies. Although ThunderClan may consider themselves the Clan of Prophecy, WindClan has always been the Clan with the closest ties to the stars and the past. Not only was the first medicine cat (and finder of the Moonstone) a WindClan cat, four of the five Clan Founders once lived in WindClan territory. Although they were rather friendly in the first arc, under Onestar's leadership they grew quite aloof. Still, in the pinch, you can count on WindClan to have your back, if they're not tearing into it.

"If you cannot devote yourself to the warrior code, we cannot trust you in our Clan."

The legendary founder of WindClan. For more information, see her entry here.

"This truly is the end of our brotherhood. I can't recognize you anymore as the beloved littermate I grew up with and traveled here with."

A legendary tactician who was once leader of WindClan. For more information, see his entry here.

The leader of WindClan when SkyClan was driven out.

"A threat to kill? That is not how we fight, Hailstar."

The leader of WindClan in the time of the prequel Super Editions.

"Maybe there are other reasons for needing to visit our neighbors. War is not the only connection between us."

The deputy of WindClan before Tallstar.

"We all have our flaws, but we overcome them. And sometimes, it's our flaws that make us who we are." 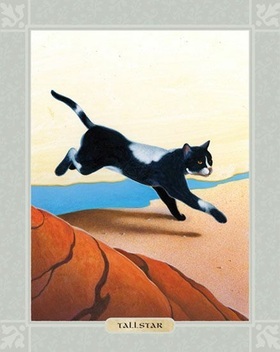 Leader of WindClan for the first and part of the second series, Tallstar was already elderly when introduced. He is a fair leader who prefers diplomacy to battle, and is always ready to accept help from others, particularly ThunderClan, who saves him several times over the course of the series.

"But Tallstar, WindClan comes before everything else. We must protect what is ours." 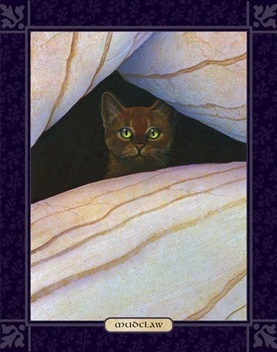 to see his appearance in the Ravenpaw's Path manga

A warrior of WindClan before being the deputy in The New Prophecy. After Onewhisker becomes the leader instead of him, he gets angry and leads a rebellion against him. But the rebellion ended when a tree fell down and crushed him, making a path to get to Gatherings. Currently living in StarClan despite what he did.

"ThunderClan must learn that they are not the most important Clan in the forest. You watch the suffering of others waiting to be begged for help like you belong to StarClan. We will not beg. We are warriors. We will fight for the prey we need and the territory we need to survive." 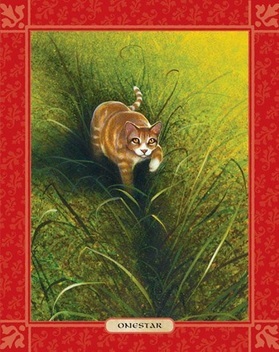 A friend of Firestar's, often meeting him and Graystripe at Gatherings. He was unexpectedly named as Tallstar's successor just prior to the latter's death, catapulting him to being leader of WindClan. Since then, he has been attempting to prove WindClan's independence and strength, primarily by distancing himself and his Clan with ThunderClan.

"That's enough. We're working together now. The patrol must do whatever they can without risking their lives."

"He's wrong to let cats die. The rogues harmed us, not ShadowClan. ShadowClan shouldn't have to pay for other cats' cruelty."

A WindClan warrior who succeeds Ashfoot as deputy in Bramblestar's Storm. He formerly trained with the Dark Forest.

"You walk in my dreams, Leafpool." 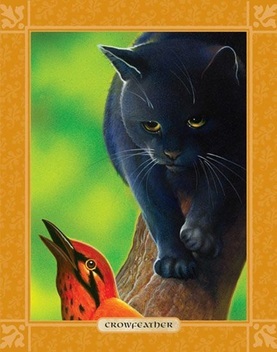 "I don't regret anything. Nothing at all."

A rude and prickly WindClan warrior, who was among the chosen cats to journey to Midnight and discover the Clans' new home. He is very disagreeable and obnoxious, but softens some after a relationship with Feathertail (he chose his warrior name in honor of her memory). Later, he has a short affair with Leafpool, and unknowingly fathers Lionblaze, Jayfeather, and Hollyleaf. He currently has a mate and son in WindClan, more to prove that he's loyal to the Clan than out of any real feelings, and is distancing himself from ThunderClan.

The first ever medicine cat. Ditzy and daydreaming, she often wandered around gathering herbs and forgetting her warrior duties. When her actions nearly cause the Clan deputy (the leader's mate, no less) to be killed, she is driven out of WindClan, but StarClan visits her and tell her she has a different role to play in the Clan.

She is the star of the 2015 Super Edition, Mothflight's Vision.

"It helps if I remember that I'm more use to my Clan where I am now. Every cat has the potential to be a warrior, but only a few of us can be medicine cats."

A WindClan medicine cat who used to be a warrior. Although many fans believe he resides in the Place of No Stars, Word of God says this is not the case.

"Betrayal could come from anywhere. You must stand alone, knowing your ancestors walk with you, and you alone." 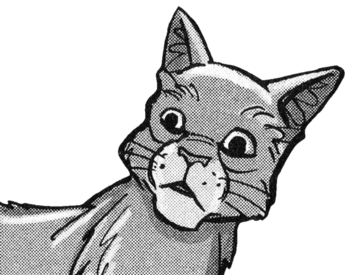 The medicine cat of WindClan for the first three arcs. Not much is known about him. He dies during the Time Skip between Power of Three and Omen of the Stars.

"But who will this battle be against? Why must we fight alone? Tallstar never saw any weakness in allying the Clans with others to make it stronger."

WindClan's medicine cat. He has an obsession with Jayfeather for some reason.

"Rabbittail never surrendered, and didn't let courage abandon him even when he was cornered by a dog in a place where dogs weren't supposed to be." 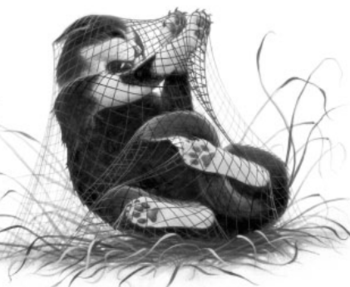 An ancient WindClan warrior who was Webfoot's distant ancestor.

"(Larksplash) doesn’t mean to be bad-tempered. She's just not a dawn cat."

"We always work in twos. If there’s a cave-in, you never leave your companion. It’s the most important rule of tunnelling. Another cat’s life is as precious as your own. Never forget it for a moment."

A tunneler of WindClan who is also Tallstar's father.

A tunneler of WindClan. Becomes mates with Palebird after Sandgorse dies.

"With this life I give you patience. Training the young takes kindness, compassion, and forgiveness. They are small gifts, but they will be rewarded many times."

Tallstar's mentor. Acts as sort of a mother figure to Tallstar.

"I know we were never friends, Wormcat. But loyalty isn't rooted in friendship. It's much stronger than that. It comes from being born and raised under the same sky, from walking the same path as our ancestors, and from sharing the warrior code. With this life I commit you to upholding the warrior code, whatever challenges you might face. This is the wisdom of our ancestors, all our traditions distilled. Trust the code to lead you along the right path."

A warrior who was a few months older than Tallstar. He was loyal to his Clan, but he was always a bully to Tallstar.

"But it's not stealing if you catch it and give it to us. Can't you just give us permission and make it easier for every cat?"

A senior warrior of WindClan. She joins the patrol in The Fourth Apprentice to free the water.

"Mother told me about you, Fireheart. How you carried me, and everything."

Morningflower's son. He is first introduced in Fire and Ice.

"Yeah, get back into your own territory, or we'll tear your fur off."

A senior warrior of WindClan, mother of Sedgewhisker. She makes small but consistent appearances, getting a larger role in Crowfeather's Trial.

"You should have more faith in our son, Crowfeather."

"You need to know that you're surrounded by lies and hatred and things that never should have happened." 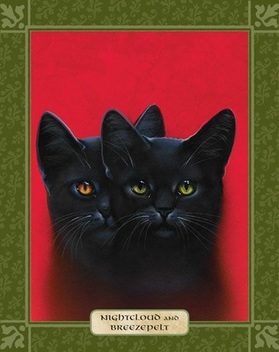 "Why would I leave the strongest Clan?"

Just as rude and obnoxious as his father, Crowfeather. Breezepelt is not well-liked by most cats. At least part of this is thought to be due to Crowfeather's coldness toward him. He despises his half-siblings and is a minor antagonist of Omen of the Stars.

"Just be careful you don't end up a bully like your kin, Tigerstar." 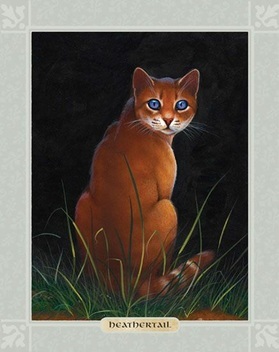 "You seem to have lost two of your apprentices."

Lionblaze's former best friend. The two of them once had a relationship (whether it was romance depends on your Shipping Goggles), and made up their own Clan, DarkClan. However, Lionblaze had to break it off so he could remain loyal to his Clan.

"We can take care of ourselves, you know. We don't need a ThunderClan apprentice to watch out for us!"

A warrior of WindClan who was lost in the tunnels as a kit. After being rescued, she told the WindClan warriors about the tunnels, thus causing the battle during Eclipse. Later, she joined the patrol to defeat the beavers and free the water. By the time of The Forgotten Warrior, she's become one of Onestar's top advisers.

"These are my Clanmates, more than WindClan ever was."

A WindClan warrior who trains with the Dark Forest, feeling unnoticed by his own Clan. His mentor is Shredtail.

In Sign of the Moon, he is killed by Thistleclaw and becomes one of the Dark Forest residents. In The Forgotten Warrior, he has been corrupted by the Dark Forest, and Ivypool gives him a Mercy Kill.

"I'm okay. I can stay and fight. I did well, didn't I? I struck out swiftly, just like you said."
Crowfeather's new apprentice in Bramblestar's Storm. She looks exactly like his first love, Feathertail.

"We need it more than you. Rabbits are scarcer than usual, so these white birds are all we have."
A WindClan warrior who becomes a warrior during A Vision of Shadows. He's one of Nightcloud's former apprentices and has a bigger role during Crowfeather's Trial.

"I hate getting my fur wet."

"Don't be silly. We tunnel because we're stronger and cleverer than all the other Clans together."

Tallstar's mother and Sandgorse's mate. She later gets another mate and litter of kits.

"WindClan fights with claws, not words."

A warrior of WindClan that appears several times in the series as a minor character.

One of WindClan's queens. During the events of Fire and Ice, Firestar met her and helped her carry her son Gorsekit.

"And the underfed tom beside you? Adderkit, yes, from WindClan. You were very young to go to StarClan, weren't you?"

A deceased WindClan kit who appears in Cats of the Clans, listening to Rock's stories about the Clan cats with Mosskit and Blossomkit.