Warrior Cats Main Character Index
ThunderClan (Leaders and Deputies | Medicine Cats | The Three and Their Allies | Warriors and Apprentices | Other ThunderClanners) | ShadowClan | RiverClan | WindClan | SkyClan | Tribe of Rushing Water | Others | Dawn of The Clans
"This is a Clan unlike any other—a Clan with all the strength, brilliance, and beauty of water. Welcome to RiverClan. I am Leopardstar, the leader here. Can you hear the river? In its flowing current you can see what makes us the greatest Clan in the forest. Nothing can stand against the forces of water, just like nothing can defeat RiverClan warriors when we rise up together. But when trouble comes, RiverClan knows how to weave through the dangers, adapting to the changed world just as the river flows around rocks and over waterfalls. We are grace. We are power. We are RiverClan."
—Leopardstar on RiverClan, Secrets of the Clans

Unlike other Clans of Warrior Cats, RiverClan cats love water. These cats live by the water, and fight with all its ferocity. But also like water, RiverClan cats are willing to change their flow to suit their needs. Although known to have contained many heroes and villains, RiverClan is generally renowned for its skilled strategists. If their unique battle skills don't defeat the other Clans, their intelligence will.

The legendary founder of RiverClan. Also see his entry under River Ripple in Characters.Warrior Cats Dawn Of The Clans.

An early leader of RiverClan best known for making a failed proposed addition to the warrior code.

The leader of RiverClan when SkyClan was driven out.

"When you feel doubt, let your heart lead you forward, not back."

Crookedstar's predecessor as leader of RiverClan. He's laid back and doesn't care much for tradition. Plays an important role in Crookedstar's Promise.

"Together we can rebuild anything. Except Clan cats who have drowned trying to rescue bits of wood."

Crookedstar's father. He was the deputy of RiverClan until after Rainflower dies.

"I'm sorry I can't make you proud of me. But I haven't finished yet. I'll do everything I can to make you glad I'm your son. You'll never make me ashamed of who I am or what I look like." 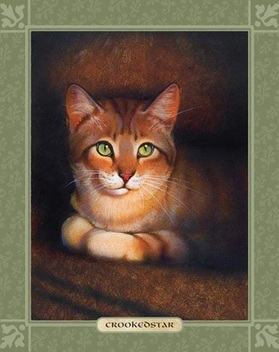 "No Mapleshade, it is you who has lost. I still have the Clan that I cherish. You have nothing and no one."

The leader of RiverClan at the beginning of the series. He broke his jaw on the stepping stones between ThunderClan and RiverClan territory as a kit. This, combined with the fact that he sneaked off the the Moonstone and stayed in the barn near WindClan territory for a moon, delayed his apprenticeship by four moons. He trained in the Dark Forest with Mapleshade, making a promise to put his Clan above everything. However, thanks to this promise, Mapleshade caused the deaths of most of his family. He is regarded as one of the greatest leaders the Forest had ever seen.

"We are a Clan and when one cat fights, he fights for the whole Clan." 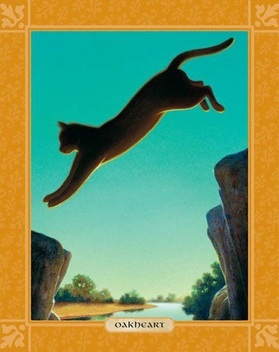 Brother of Crookedstar, and an extremely well-respected warrior. Often regarded as a paragon of warriorhood, even by cats of rival Clans. He is also the father of Bluestar's kits: Stonefur and Mistyfoot, and took them to RiverClan when Bluestar was forced to give them up. He is killed in the prologue of the first book, and the exact circumstances surrounding his death prove of vital importance in the first few books. 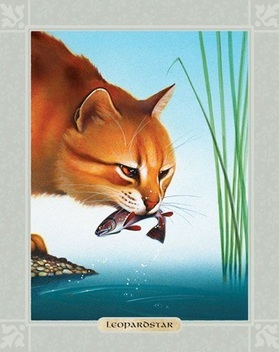 "I am leader here, Blackfoot. I make the decisions. And I'm not ready to give up yet— not if there's a chance of driving out BloodClan."

Crookedstar's third deputy, who becomes leader after he dies. She is a proud and haughty cat, and almost cost her Clan her freedom when she joins Tigerstar's TigerClan and their persecution of half-Clan cats. Died in Fading Echoes; from feline diabetes, according to Word of God.

""No cat has ever questioned my loyalty. Come down here and tell me to my face that I'm a traitor!"

Mistystar's brother and the former deputy of RiverClan. He was killed by Blackstar in The Darkest Hour. 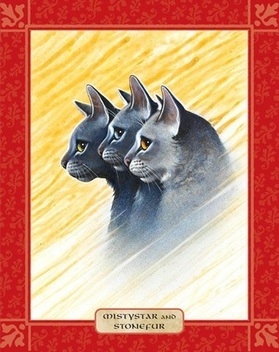 "I'll always be grateful for what you did, but I'm a RiverClan cat at heart."

The leader of RiverClan after Leopardstar, and daughter of Bluestar and Oakheart.

"I don't like this silence. I can smell ShadowClan nearby."

Mistystar's son, and the deputy she chooses.

"The only true borders lie between day and night, between life and death, between hope and loss."

"Sometimes bad things happen for no reason, or for reasons we can't begin to understand."

"I fought to save [RiverClan] from fighting. But they want to fight. I've unsheathed my claws too many times. I want to save lives, not destroy them." 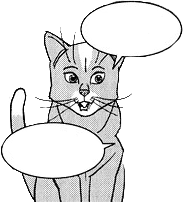 RiverClan's medicine cat in the Original Series. Formerly a warrior, he grew disillusioned when his mate died and believed that true peace could never be found as long as the Clans continued their perpetual war. He eventually decided to train under Brambleberry as a medicine cat. He is Leopardstar's father.

"They're just dead warriors! Do you think that when they die, they get clever and brave? Don't you realize that some of them may be as foolish and wrong-headed as they were when they were alive?" 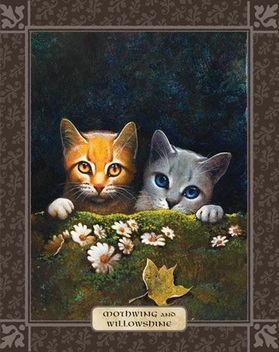 "I may not share your faith, but I'll always help you fight for what you believe in."

Tigerstar's daughter by Sasha, and therefore Hawkfrost's sister and Brambleclaw's and Tawnypelt's half-sister. She does not share her brother's motivations, and genuinely wants to help her Clan by serving as their medicine cat. However, she does not believe in StarClan, a fact she keeps secret from everyone except Leafpool, knowing how important belief in StarClan is to the Clans. This essentially makes her the equivalent of an atheist priest.

"I didn't really think about it. It just sort of happened, and then I couldn't imagine doing anything else. Being a medicine cat is great!"

One of RiverClan's two medicine cats alongside Mothwing (formerly Mothwing's apprentice, until Bramblestar's Storm), who is very much a believer in StarClan. She is able to interpret omens for the Clan where Mothwing cannot.

"Ryewhisker, you can't do this! We have to fight our own battles!"

An ancient RiverClan she-cat who had a forbidden relationship with Ryewhisker, a WindClan tom.

"There is no cat more loyal to RiverClan than Appledusk. If I am willing to forgive him for his past mistakes, then so should you, Darkstar."

"What you have done here is more terrible than anything a Clan cat has done before!"

Appledusk's second mate and the mother of his kits.

"If he'd stayed in camp he'd never have had the accident. Then he wouldn't be the ugly mess he is now. He'd still be my handsome young warrior."

Crookedstar's mother. Though initially doting, she neglects, ignores, and emotionally abuses him after his disfigurement.

"Of course [I'm scared]! I'm not stupid. Battles are dangerous."

Leopardstar's mentor. That's basically all that describes him.

"A warrior should be ready for anything!"

A kit of the RiverClan leader Hailstar, Beetlenose grew up with Crookedstar and Oakheart, and was therefore one of their close friends, even if he annoyed them at times.

"I'll fight to the death if have to."

Beetlenose's sister who is much more down to earth than her over the top brother.

"We've got to be able to catch land prey as well as river prey." 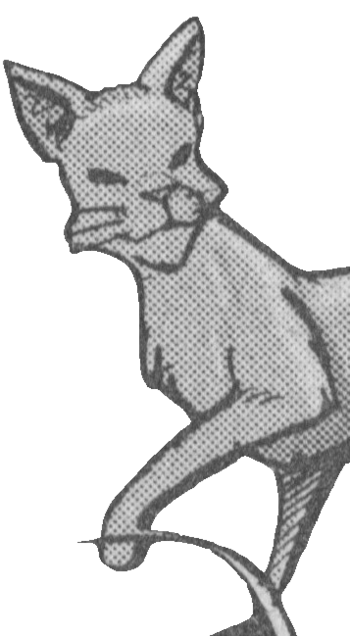 "Sorry! I know I talk too much but I just want to be the best apprentice. I'm so glad you're my mentor. You're the strongest cat in RiverClan, except Rippleclaw, but he's old—not an elder or anything—but you're younger and you remember what it's like to be a 'paw."

"But you brought us here because you believe we can work together. We did it before, didn't we? For the Great Journey? Will you give up so quickly this time?"

"Think you have nine lives, do you? I saved you once. Don't make me save you again." 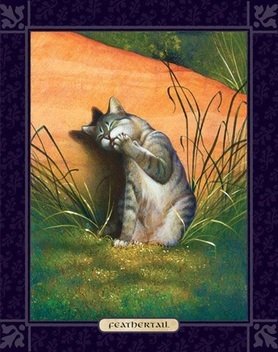 to see her appearance on the cover of Moonrise

Graystripe's daughter, she was among the four cats chosen to journey to Midnight and find a new home for the Clans. She forms a relationship with Crowpaw, and almost brings out a friendly side to him. Unfortunately, she does not survive the journey, and sacrifices herself to kill Sharptooth, a mountain lion preying on the Tribe of Rushing Water.

"There are worse cats I could imitate [than Tigerstar]." 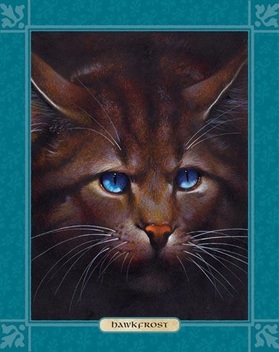 "Then you're a fool, and stupid too."
Click here

to see his appearance on the cover of Sunset

Son of Tigerstar by Sasha, and Brambleclaw's half-brother. Hawkfrost is very similar to Tigerstar in his manner and personality, but hides his true motivations due to the Clans' lingering hatred of Tigerstar. In many ways, he serves as Brambleclaw's Evil Counterpart.

"I only ever wanted to help my Clan. My life was worth that."

One of the two RiverClan warriors chosen for the patrol to bring back the water. He dies sacrificing himself to save one of the other cats.

"Yes. And I'm grateful to them. But then they said that they wouldn't let me come back home unless Leopardstar gave them some fish."

A RiverClan tom desperate to protect his Clan from the drought. After fighting with Ivypool over a fish, he falls into a mud patch, but is saved by Thornclaw.

"[The Warrior Code] teaches us to be strong! I don't know what you are trying to do, but you'll never make me despise the warrior code, or my Clan!

"I told him how the other apprentices were bullying me, and he said he'd teach me how to stand up to them."

A young cat who trains with the Dark Forest because he is bullied in his Clan.

A cat first introduced in A Vision of Shadows. She's Lakeheart's daughter.

"Never be afraid of the future, for it brings wonderful things."

"You'll be a wonderful father. I'm so happy Hailstar brought me back from WindClan. I've loved being with you and with RiverClan."

Crookedstar's mate from Crookedstar's Promise. She is half-Clan, descended from RiverClan and WindClan. As such, she is somewhat of an outcast in RiverClan, but Crookedstar understands her.

"You're obsessed with Clan loyalty. If you could see beyond your nose, you'd realize...there's a lot more to life than what we've got in one little Clan. Graystripe is a great and worthy warrior. If the warrior code can't deal with this...then maybe the warrior code needs to change. I know you're worried because you love me. And I love you too. I'll always be your daughter. But you have to let me choose my own future." 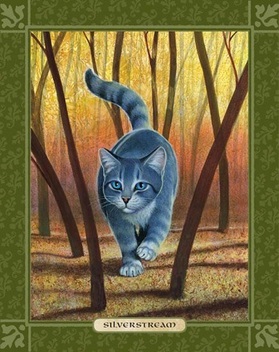 The daughter of Crookedstar, Silverstream saved Graystripe from drowning while Graystripe was hunting. After this, they fell in love and snuck away from their clans to meet. However, Silverstream dies delivering Graystripe's kits.

"Don't be such a fool [Crookedstar]. You're too proud for your own good. How can we feed ourselves, even with the thaw? There are no fish to eat. The river's practically poisoned; you know it is."