Characters / The Adventures of Dr. McNinja

Our hero. He has the skills of a doctor and the soul of a healer, but he won't hesitate to get violent with anyone who deserves it. Made of a subtle sprinkling of Insanity over a base of Awesome.

"These are no coward's weapons."

The effing badass kid: Doc's ward and protégé. His father was a circus performer with a incredible finishing routine — until it went wrong.

"Ook ugh." translation "The power of ciprofloxacin hydrochloride compells you."

Doc's receptionist and occasional muscle. She works for the doctor because his life is very exciting and also because she is a professional.

A wild velociraptor formerly owned by a gang of Mexican paleontologist banditos (don't ask); currently Gordito's mount and pet. Not too smart but makes up for it with teeth.

"We are on Eastern Pain Time, and it is Dan O'Clock."

Doc's dad. Defeated Frans Rayner to become head of the American guild of ninjas in the 80's. His mustache gives him instant respect and authority, which is why he cut a hole in his ninja mask so it would always be on display.

"Care to race to see who can sink the boat first?"

Doc's younger brother. Torn between his parents' desire for him to be a good ninja, his own geeky tendencies, and his longing for popularity, resulting in a use of over-the-top "hip" slang. Wearing a ninja mask.

A clone of the Doc. He's a farmer.

"Sometimes people need to get killed."

The first villain to be introduced in the comic, guilty of defaming Dr. McNinja's name in a new burger promotion. Appears later in "There is a Raptor in my Office" and later in "AWOL MD"

“You are just the baby school, and I’m the Big League Chew. Why do you try?”

to see him later in the comic.

Became the bitter enemy to the McNinja family after Dan humiliated him. Did a series of action films in which he carved a swath through ninjakind with the aid of copious amounts of The Law of Conservation of Ninjutsu and bloodshed.

“Cutting open your face and experimenting on your brain.. Hehe!! It sounds so much worse than it actually feels.”

Extremely short neurogenetipharmocologist in the employ of Frans Rayner. Developed the ninja drug responsible for the events of the DARE arc. Somewhat creepy.

“I have accomplished so much during my never ending life...”

The real thing. His immortality has enabled him to master every technology and amass the world's greatest minds and talents in his secret moon base, but he is getting bored.

The doctor's ex-girlfriend from college. Now works as a mercenary of some sort.

During The End: Part 1 (SPOILERS) 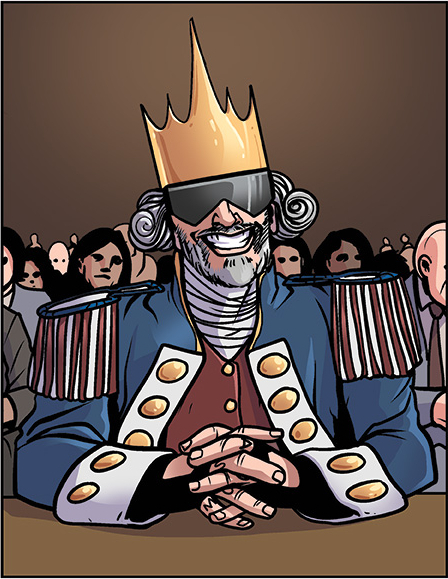 The most radical man in the radical land. Conducts amoral dealings to improve Cumberland and make it more radical. Antagonizes Doc for fun.

“I am Ron Wizard, Sir Cowabunga of Clubs, servant to the Radical throne. What foul magic has brought me to this incredibly bogus plane?”

Ron is King Radical's Court Magician back in Radical Land, and the second most radical man of them all (after King Radical of course).

“It reeks of death and mediocrity. I love it.”

Evil unicorn who led a revolution of the radical land in an attempt to depose King Radical.

”I am a lobster who likes to steal."

A flying dinosaur that stalks the doctor around.

The undead crew of the Nintendo 64, a space shuttle launch that was destroyed by saboteurs. After their spirits were mutated by space radiation, they went on to act as vengeful guardians, relentlessly hunting anyone who harms a NASA astronaut.

Gordito's uncle and a former palaeontologist.

Old college friend of Dr. McNinja who was once a teammate of his on a crime-fighting superhero team. Now he owns a chain of grocery stores.

"Greetings from the future, you son of a bitch!"

Mayor of Cumberland, elected for his plans to stop zombies destroying the world.

“Judy, I am being stalked by a horse. A spooky horse.”

A clone of Benjamin Franklin and Dr. McNinja's college professor. Helping him is the focus of the Punch Dracula arc.

"Shh... I prefer the spiders not to know my name."

A mentally unstable doctor wearing a luchador mask. His primary means of healing his patients involves extreme methods, i.e. shoving the cure up their nose and then body-slamming them. Ran out of Cumberland by Dr. McNinja.

Was one of Radical Land's four knights, along with Ron Wizard, Sir Sicknasty, and Sir Hellacious.

"Somebody is still trying to kill me."

The missing former president of the United States.

A vampire the Doctor met at college, a shaky truce has been set that Sebastian and his vampires will not harm human in exchange blood bank supply from the Red Cross.
Archibald

Archibald, King of the Hobos

"The Cumberland Sovereign Mayor Act of 1910 clearly states that if the Mayor's office is vacant for 30 days, then the office shall be filled by Archibald, King of the Hobos. That is me."
A wandering adventurer who takes over as Mayor of Cumberland by default after Chuck Goodrich goes into hiding. He's accompanied at all times by his travelling companion and deputy Mayor, a genuine mummified prince of Egypt with an array of mystical powers.