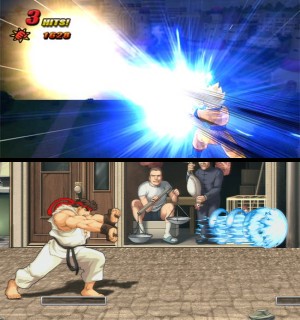 The Trope Namers themselves, Goku and Ryu, delivering a wave of hurt.
Advertisement:

The Kamehame Hadoken is a Ki Manipulation technique (or any Functional Magic equivalent) in the form of a burst of weaponised energy, typically shot from the cupped hands of the main character after bringing their hands forward from behind their back or aside their hip, and varying greatly in size and intensity; from the "normal", utility Energy Ball attack (as it is with Hadoken) to a devastating beam worthy of a Limit Break or Finishing Move (as it is with Kamehameha).

A staple for Shotoclones, along with the Shoryuken and Hurricane Kick. Compare with BFG, which is often the technological version, and Wave-Motion Gun, for the Humongous Mecha or spaceship-scale version of that. Also Wave Motion Sword, the sword version. Contrast Beam Spam. Compare also Blasting Time, where the character "throws" the energy attack.

The Kamehameha part of the trope's name comes from Dragon Ball: creator Akira Toriyama named Roshi's ki attack after Kamehameha I (King of Hawaii), which was suggested to him by his wife. Meanwhile the Hadouken (Surge Fist/Wave Motion Fist) was inspired by the iconic Hadouhou of Space Battleship Yamato, or, as it's translated, the Wave-Motion Gun.

Compare with Hand Blast, where the attack is not tied to the attacker's Ki, Life Energy or Mana. Depending on perception, both could be delivered by Power Palms.

Lucario's most well known move, Aura Sphere, a 80 base power Fighting type special move that never misses, as demonstrated in Lucario and the Mystery of Mew.

Lucario's most well known move, Aura Sphere, a 80 base power Fighting type special move that never misses, as demonstrated in Lucario and the Mystery of Mew.