Pete: Roleplaying is his downtime. He likes to turn his brain off.

Jim is a roleplayer of the "XP and loot first, plot later" variety, and is more interested in having a cool adventure than in puzzles or plot. He tends to jump head first into things, often while barely understanding the situation and frequently making things worse. But Jim isn't stupid: he's actually a highly intelligent graduate student who can come up with plausible explanations for the most nonsensical stuff in the Star Wars universe. He just likes to "turn his brain off." He has developed a rather obvious crush on Annie, culminating in them starting to date at the end of Episode II. The relationship sours between Episodes II and III, but later recovers.

Plays Qui-Gon Jinn, Anakin for about two strips, and later Padme, then - eventuallynote He started Episode IV with a string of characters like Kyle Katarn and Captain Antilles killed off in rapid succession. - Han Solo, in D&D universe (originally) renamed "Greedo". In the Rogue One campaign, he plays "Kyle Katarn" (Saw Gerrera), then later takes the place of Bria Tharen (Jyn Erso). In Episode VII when everyone creates new characters he plays Poe Dameron.

Pete: Oh, you took character/player separation as a flaw, uh?
Ben: That's not in the rules...
Pete: I meant in real life.

An old roleplaying buddy of Jim's. Ben is often the voice of reason, and tries his best to rein Jim in. He's rather more focused on the role-playing than Jim—he's one of the few participants to distinguish between in-character knowledge and out-of-character knowledge, and he's even taking drama classes to help with improv. He's also very good at thinking his way around the GM's setting and rules. He has a habit of pointing out the flaws in the setting. He studies medicine outside the campaign, if only because his father wants him to. After his sister Sally confronts him over this in Episode III, he goes away to rethink his life, and doesn't return until two years later during Episode IV.

Played Obi-Wan Kenobi until he was killed by Darth Vader in Episode IV and then took control of Jim's sidekick, Chewbacca; though he still occasionally returns to the role of Obi-Wan as a ghost. He was not present in the Rogue One campaign (which, in the comic's player's continuity, was because he was Walking the Earth at the time). In Episode VII when everyone creates new characters he plays Lor San Tekka.

Sally: Mesa got biiiig long floppy bunny ears... and a tongue like an anteater! And mesa face is kind of like a pony and mesa coloured peachy pinky white!
GM: I've run Call of Cthulhu with less ghastly sounding monsters.

Ben's younger sister. Initially she only tagged along with Ben because her parents couldn't find a babysitter that night, so the GM worked her into the game, and she ended up enjoying it far more than anyone expected and sticking around for the rest of the campaign. She's also wildly imaginative and not afraid to contribute to the world-building—many of the stranger aspects of the prequel trilogy were her contributions.

Played Jar-Jar Binks in Episode I, then kept switching between a bunch of minor side characters like C-3PO, Mace Windu, and Yoda after she got bored with the Non-Action Guy. She finally settled on C-3PO and Yoda. In the Rogue One campaign she plays K-2SO. In Episode VII when everyone creates new characters she plays Kylo Ren.

Ben: You know he's good at contorting complicated sets of rules to achieve the most favourable outcome.
Annie: Yes, but for the benefit of others?

An old friend of Jim's. Pete tries to abuse the system as much as possible - for example, he designed his character as short, armless, and unintelligible so he could get advantages elsewhere. Spent most of Episode II bitter about a low-fantasy campaign that he, Jim, and Ben played during the first Time Skip.

Plays R2-D2, and subbed in for the GM when he had to leave for a family emergency in Episode II. In the Rogue One campaign he plays Chirrut Imwe. In Episode VII when everyone creates new characters he plays Rey.

Annie: I've jotted down a few lines on how I want to play Anakin.
GM: A few lines? This is longer than all of my campaign notes!

Initially a thespian rather than a gamer. She met Ben through drama class, and he introduced her to the role-playing group. She initially saw the sessions as acting opportunities (and she provided a humorous outsider's perspective on the usual PC behavior), but she is getting the hang of the combat simulations. She clearly has a lot of fun collaborating with the GM on her characters' backstories, and playing the parts for all the angst she can. Has been dating Jim since the end of Episode II. Ran her own supernatural campaign during the second Time Skip, but the other players didn't take to it and it strained her relationship with Jim during Episode III. However, the two work out their differences.

Briefly played Shmi before taking over Anakin Skywalker, then switched to Princess Leia in Episode IV, later doubling as Darth Vader. It's later revealed that Vader is actually Padmé in this universe, not Anakin, which means that Annie inherited this character from Jim. She plays Cassian in the Rogue One campaign. In Episode VII when everyone creates new characters she plays Finn.

Corey: I look forward to pwning all of you. Where are the computers?
GM: No computers. This is it.
Corey: Lol, what? Pete said we were playing a roleplaying game.

Pete's nephew, who he brings along to a session early in Episode IV. He appears to be an experienced MMORPG-player (judging by some Leet Speak in his dialogue), and is unimpressed with their more traditional system. This causes immediate friction with Sally.

As of Episode IV, he plays Luke Skywalker (in D&D universe going by the name "Adam Lars", later "Luke Amidala", and now "Luke Starkiller"). He is not present in the Rogue One campaign as that took place before Episode IV. In Episode VII when everyone creates new characters he plays BB-8.

Ben: We're messing up the GM's plans again. He probably had this whole city mapped out.
GM: No, you guys have been great for my improvisation. I've learnt not to plan ahead more than ten minutes.

He comes up with epic campaigns for the others to play... which rarely last five minutes before they go completely off the rails. He's given up trying to railroad (except briefly in Episode III, where he becomes really insistent that Ben/Obi Wan go to Naboo) and instead works around the craziness that his players come up with. He still takes a perverse pleasure in ensuring that any morally dubious action the players take somehow returns to bite them in the rear.

The leader of the Trade Federation, who gets far more screentime than in the movies.

The Queen's aide, who is not plotting anything nefarious.

The senator from Naboo, he seems to be a pretty decent guy, working to keep order in the galaxy and shying away from underhanded dealings whenever possible. This is a stark reversal from the original movies: instead of him manipulating the well-meaning Anakin into joining The Dark Side, it's the other way around.

A private eye hired by Palpatine to help recover the Lost Orb of Whatever, he is actually meant to be an ally to the PCs, but is not treated as such by Jim (who, of course, sees everyone in terms of XP and loot).

Supreme Chancellor of the Republic. He is given a much expanded role than in the movie.

A bounty hunter after Obi-Wan.

The leader of the Separatists, worried about the dangers of the Peace Moon.

The Separatist general, with an expanded backstory compared to the movies.

A slightly ditzy member of the Jedi Council. He is played by Sally for a short while.

The many clones of Jango Fett, grown as an army for the Republic.

An Imperial leader who often butts heads with Vader.

Han's friendly and urbane partner, who constantly has to deal with Han's ridiculous schemes. He is eventually taken over by Ben. 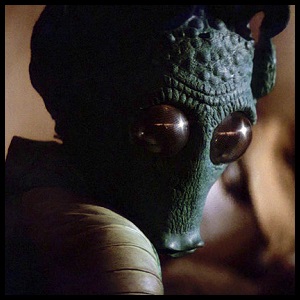 Pilot of the Millennium Falcon, and a shapeshifter who assumes the appearance of a green alien when he shows up. He gets promptly killed and his identity stolen by "Greedo".

A crime lord who is friendlier than in the movies.

Adopted son of Jango Fett, and the son of Darth Maul and Zam Wessel.

Wedge Antilles
A recruit for the Rebellion, and a shapeshifter. Also not up to anything evil.
"The Moon Ghost"
A malevolent entity who appears at the climax of Episode VI.
Bria Tharen
A Rebel, and the adopted daughter of Kyle Katarn. Her biological father works for the Empire. She eventually gets to be played by Jim.