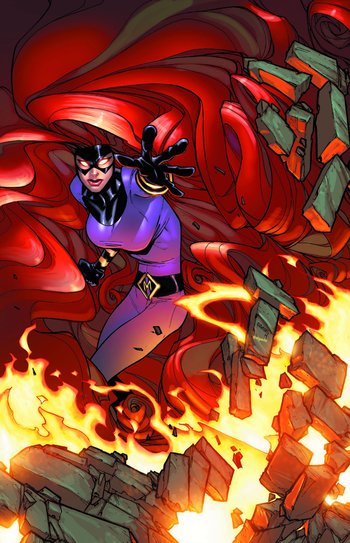 Introduced as a member of the Frightful Four —an evil counterpart to the Fantastic Four— while lost in the human world and suffering from amnesia, Medusa soon regained her memory and was recovered by the Inhuman royal family, who'd been searching for her.

Having grown up on Attilan as part of the Royals, Medusa formed a close (and telepathic) bond with her distant cousin Black Bolt, who she'd later marry and have a son —Ahura— with. Her sister, Crystal, is a former lover of the Human Torch and the ex-wife of Quicksilver.

Medusa's Inhuman ability (activated upon exposure to the Terrigen Mist) is her prehensile hair, which she can grow and control as if they were limbs. Like other Inhumans, she also displays advanced strength, and her hair alone can support more than a ton.

Over the years, Medusa became Queen of the Inhumans, even serving as their acting ruler during Black Bolt's frequent disappearance. She became especially prominent in the wake of Infinity, when a Terrigen Bomb unleashed on Earth activated the powers of latent Inhumans worldwide. Relocating Attilan to New York City, she became the new face of Inhumans on Earth, and played a major role in the second superhuman Civil War when an Inhuman with precognitive abilities was discovered.

Moreover, she was a key figure during Inhumans vs. X-Men, which concluded with Medusa abdicating from her throne on Earth after the conflict was resolved. With the rest of the royal family, she heads back into outer space, seeking answers about their kind and why they came to be.

Medusa has appeared frequently in other media, showing up in various cartoons based on Marvel characters, like Fantastic Four and Disney XD's Marvel Universe block. In 2017, she made her live-action debut in the ABC series Inhumans, played by Serinda Swan.