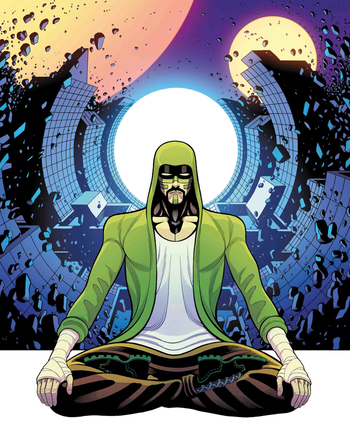 The fault in all things...
"The world is broken, Gorgon. I only force it to admit that."

Born to an Inhuman priest and his ocean biologist wife, Karnak is one of very few Inhumans who weren't exposed to Terrigen Mist as an adolescent. After his brother, Triton, was left unable to live outside of water because of his Terrigenesis, Karnak's parents pleaded with the Genetic Council to prevent their other son from meeting a similar fate.

As such, he was sent to his father's monastery, where he became skilled in martial arts and developed an ability to sense the weakest point in any given object or person. According to the time-displaced Jean Grey, he's the most dangerous of all Inhumans.

In the following years, he'd become further immersed in the greater Marvel Universe, often in the context of the Fantastic Four. After Terrigen Mist was unleashed onto Earth by his cousin Black Bolt, Karnak killed himself by jumping off of Stark Tower, citing his realization of "the fault in all things" as the main reason. But since Death Is Cheap, he returned from the dead a few years later.

Following the Inhuman-Mutant War, Karnak (as well as his cousin, Ahura) elected to stay on Earth while the rest of the royal family returned to space. During this time, he was recruited to join Daisy Johnson's new Secret Warriors, working to protect Earth's Inhuman population from outside threats to their kind.

Karnak made his live-action debut on the ABC television series Inhumans, portrayed there by Ken Leung. This version of the character largely resembles his comic book counterpart, with the exception that he was actually put through Terrigenesis as a youth, instead of developing his abilities through rigorous training and meditation.

Not to be confused with Carnac the Magnificent.

Karnak has appeared in: