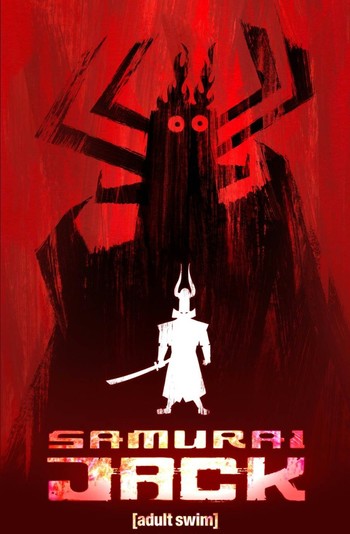 "It always seems bad at first, but then I find a way."
"Fifty years have passed, but... I do not age. Time has lost its effect on me. Yet, the suffering continues. Aku's grasp chokes the past, present... and future. Hope is lost. Gotta get back... back to the past... Samurai Jack."
—Jack's Opening Narration
Advertisement:

We now introduce the long-awaited fifth season of Samurai Jack, arriving on Adult Swim thirteen years after the show seemingly ended with no conclusion.

Set fifty years after Season 4, Jack is still stuck in the future looking for a way to return to the past, and to his own surprise, his body has not aged. He has lost all sense of time and is slowly going insane from the struggle. As his journey drags ever on, the samurai wonders if he will ever succeed in his mission to destroy Aku. The evil demon, who has not shown himself in years, also suffers from depression; his hated nemesis has evaded every peril, including death by natural causes. But unknown to either, a cult of Aku worshipers have raised and trained a band of deadly assassins, for the sole purpose of killing the staunch samurai and winning Aku’s favor.

Creator Genndy Tartakovsky returned for this final season, which serves as a true Grand Finale for the series. The show started airing March 11, 2017, on [adult swim]'s Toonami block, and concluded on May 20, 2017.