Hulking Out
aka: Hulk Out 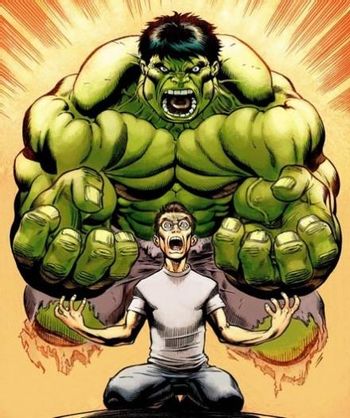 Ayano: Is he having some sort of allergic reaction?
Kazuma: I don't know but I'd be worried if my body did that, seems like you would go through a lot of pants that way.
— The reaction to seeing someone Hulk Out in Kaze no Stigma

What happens at the intersection of You Wouldn't Like Me When I'm Angry, Shapeshifting (often of the involuntary kind) and Unstoppable Rage. Generally, the trope goes like this:

If the subject is female, there's a good chance that they'll become an Amazonian Beauty and/or a Statuesque Stunner.

For some reason, werewolves in modern fiction are often subject to this type of transformation, rather than (just) the full moon. Can involve a Superpowered Evil Side or a Jekyll & Hyde scenario. Berserk Buttons are often involved as well. May result in a Heroic RRoD. Compare The Berserker for cases where the transformation is purely psychological.