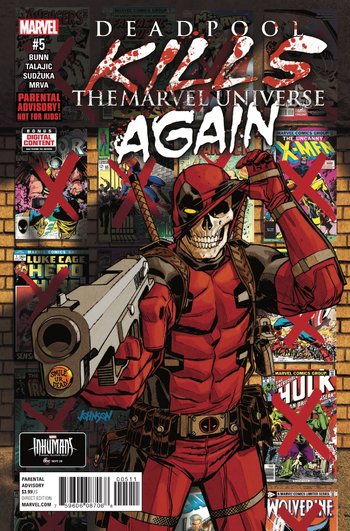 If characters from our world visit an Alternate Universe, neither they nor the audience care what happens there.

This goes further than individual death. Absolutely anything horrible can happen in an Alternate Universe—Zombie Apocalypse, life-threatening plague, being taken over by evil, or completely destroyed—and our Earth will still be safe, if we can close the portal. Many heroes will not leave the Planetville of the week until its problems are solved, but for the Alternate Universe, all they care about is getting out alive.

The reason for this is that an Alternate Universe often feels like a cheap copy of our own. It's just an extra us, so its people aren't unique characters, and under the Second Law of Metafictional Thermodynamics, ‘not being unique’ automatically makes one expendable. It is extremely rare for so much as a single refugee to escape a doomed Alternate Universe, because that refugee will ruin Cast Speciation for the Earth-1 version unless the refugee will become a Suspiciously Similar Substitute. In-universe, this is often simply pragmatism from the characters: Works that feature alternate universes often use the "infinite variations" model of The Multiverse, and the leads simply can't afford to worry about saving every single possible universe.

Things are even worse if there's only one world, but Time Travel can change it back and forth. People in the future can die a hundred times each, but since the Time Travel will bring them back, who cares?

A related issue is that too many alternates can cheapen established stories. If the heroes have saved Earth from Planet Looters, the Zombie Apocalypse, The Virus, the Straw Nihilist and the Circus of Fear, that's impressive. If there's an Alternate Universe for each one of those villains winning, it means our heroes aren't impressive—they lost as often as they won, and we're from the universe where they just happened to win five times in a row. This gets even more egregious when there are infinite alternate universes; for every event in "our" universe, there are infinite others in which it didn't happen... The inverse applies as well—if the heroes only manage to win in one out of many possible universes, the fact that the odds are stacked against them can help to emphasize their struggle and thus make their eventual victory all the more satisfying. However, if there is also an infinite number of other possible universes out there wherein they still manage to prevail in the end, it can trivialize their struggles and leave audiences wondering what exactly the big deal was.

On the other hand, "You can have an infinity of apples but still not a single orange", as a scientist explained this theory: So it's still perfectly possible that the heroes win everywhere, or at least more often than they lose.

This callousness doesn't apply to worlds that are less obviously mirrors of our own. Wonderland, Narnia (assuming Up the Real Rabbit Hole doesn't come into play), and dimensions with only nonhuman life are all technically alternate universes, but they're so different that losing them actually hurts.

For those who don't feel an Alternate Universe is expendable and wish to save it, see Save Both Worlds. Compare Reset Button Suicide Mission, Dream Apocalypse, Dead Alternate Counterpart, The Time Traveller's Dilemma.