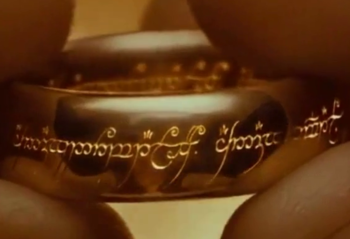 Ash nazg durbatulûk, ash nazg gimbatul, ash nazg thrakatulûk, agh burzum-ishi krimpatulTranslation
One Ring to rule them all, One Ring to find them, One Ring to bring them all, and in the darkness bind them
Detective Gaff: Monsieur, azonnal kövessen engem bitte.
Sushi Chef: He say you under arrest, Mr. Deckard!
Deckard: ...Tell him I'm eating.
— Blade Runner
Advertisement:

Conlang is short for "constructed language,"

such as a language the writer, their friend, or some other associate has made up for the purpose of using in a book or show.

No, they did not just say that the Aliens/Elves/Bee People/Whatever speak a different language, they actually made up an exact vocabulary and grammar, one that can be translated into English (or equivalent). This is where Translator Microbes are abandoned and a dictionary given to the reader. Gibberish does not count as a language, regardless of whether or not the other characters say they can understand it, and using a mere handful of alien words, even if you give them a translation, does not count either.

In Real Life, an auxiliary language or "auxlang" is a conlang intended for use by real-world groups. Esperanto is the best-known example.

Since virtually any fictional language could theoretically be part of a larger language, this trope only applies to those fictional works that actually give us enough to say some things of our own. The more dedicated Fandoms will often design languages — or at least large vocabulary lists — of otherwise unorganized languages. (See Fictionary.)

There are four types of conlang:

Note that while some writers go to great lengths in trying to make the languages they come up with seem as natural and realistic in terms of grammar and syntax as possible, this rarely affects the script. While Earth's writing can be allocated to five categories (Alphabets with distinctive letters representing both vowels and consonants such as Greek, Latin, Korean, or Cyrillic; Syllabaries which are similar to alphabets except each letter represents a syllable such as Japanese and Cherokee; Abugidas which are similar to syllabaries except letters are formed from a base shape and modified according to what vowel comes after it such as Hindi; Abjads which limit themselves only to consonants such as Arabic or Hebrew; and Logographies featuring thousands of characters representing particular concepts rather than sounds such as Chinese or Old Egyptian), you'll be hard-pressed to find non-alphabets being used in any world of fiction. Often, it's a result of Write What You Know (or should that be Make What You Are Familiar With?), but it can also be a result of easiness or practicality: for alphabets you only need to make a glyph for every sound you have which should be quite small (less than 40), while a syllabary for example would require you to make a glyph for every syllable you have, which for any language that even remotely allows consonant clusters means you're looking at a few hundred glyphs. Even the fictional people who speak your conlang would find a few-hundred-glyph syllabary too much and simplify it.

The complete original sort has picked up in popularity in the recent decades, and especially recent years, with the likes of linguists Mark Okrand and David J. Peterson being hired to provide a fictional language with completely unique grammars and writing scripts, the target ostensibly being to make the language in question as far removed from English as possible, so expect a non-SVO word order, tons of grammatical cases, obscure tenses, postpositional adjectives and no articles. And don't even think about your "modern" left-to-right direction of writing! note Even though it was used by the Sumerian cuneiform script, the oldest in the history of mankind.

It should be noted, however, that in an example of The Coconut Effect, a sufficiently "exotic" language doesn't need to differ from English in every possible way just to seem more plausible. Contrary to the popular belief, a language's complexity (or lack thereof) hasn't been proven to be linked to a society's level of civilizational advancement,note In Europe alone, the nightmarishly complex Finnish did not hold back Finland from becoming a welfare state on a par with its Swedish neighbor and Romanian, arguably the most regular of the languages used in Eastern Europe, happens to be used in Moldova, the poorest country on the continent.note Early scholars studying Hawaiian, unable to discern the subtle nuances of its grammar and sound system — especially the vitally important 'okina glottal stop — called it "a pleasing, childish lisping, which can scarcely be called a language". and many languages which linguistically are not related to English in any way, such as Hebrew or Chinese, might turn out to be much more familiar in structure to speakers of English than even some of their fellow Indo-European languages, such as Slavic ones.

It's just as ungrounded to expect every "ancient" language to be much more complex than any that is to be found in the modern world. While it's partly true that isolation might contribute to a language retaining its original form largely intact (such as is the case with Icelandic), some of the areas in which extremely archaic languages are spoken (most notably the Baltic ones) have been anything but isolated throughout the last centuries. And even though the general trend does seem to be towards simplification of a language over a period of time, it's important to note that most studies on this focus on the Indo-European languages, which all defend from a language called, well, Proto-Indo-European, which is a very grammatically complex language already. So it's hard to imagine any culture would go with even more complexity.

Cypher Languages are a subtrope of this, and many forms of Black Speech fall here as well. Contrast with Wing Dinglish where a supposedly alien or original language is just regular English in a strange font. Compare and contrast Fictionary, when the language in story is just a few exotic words or phrases rather than a full grammar or syntax— but, as noted, sufficiently dedicated fans may be able to turn this into a Conlang of their own.

Interestingly, an alternative title interpretation is that these languages tend to be spoken by die-hard fans at Cons...

Authors who worked on multiple conglangs: