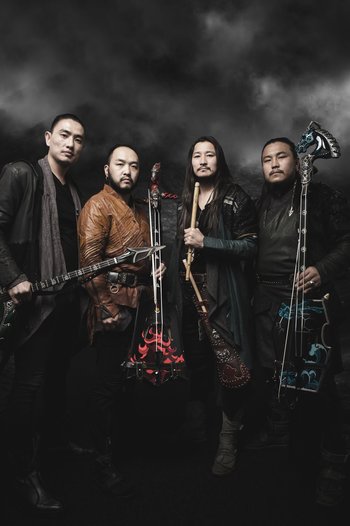 From left to right: Temka, Enkush, Jaya, Gala
"Those who study Mongolian music believe one reason The Hu has proved so popular with outsiders is this combining of modern and historical and eastern and western elements."
—NPR
Advertisement:

The Hu (also rendered as The HU; Хү in Mongolian) is a band formed in 2016 from Ulaanbaatar, Mongolia. Blending in an unique way metal music and traditional Mongolian folk music (in particular throat singing), the band refers to their style as "Hunnu Rock", with "Hunnu" being the Mongolian word for the Xiongnu

, an ancient civilisation located in the Eurasian steppes, that is often identified with the Huns in the Western world.

The band was formed by Bayarmagnai Dashdondog, AKA Dashka, a producer with a long story of collaboration with Mongolian pop and rock bands. With the idea of blending together ancient folk sounds and modern metal music, to create something new and never heard before, he picked the current members of The HU from the Ulaanbaatar Conservatory. So they debuted in late 2018 with two music videos, "Yuve Yuve Yu" and "Wolf Totem".

To describe their debut a success would be an understatement. Their first two singles gained 7 million views by the end of 2018 and 100 million after a year. Compare that with ethnic Mongols numbering 10 million people. In 2019 "Wolf Totem" made The Hu the first Mongolian band to top on a Billboard chart, with "Yuve Yuve Yu" also present several positions below.

In 2019 the band released their first album, The Gereg; the same year, Mongolian president Khaltmaagiin Battulga personally congratulated with the band for promoting Mongolian culture abroad, awarding them with the Order of Genghis Khan, the highest state award of the country. It can be said that The Hu single handedly brought under the international spotlight a country that was until recently relegated to the periphery of the world.