Main Character Index
This character page is for Templars in the modern day storyline, as well as historical Templars who don't fit into the time periods of the games, comics, or film.

open/close all folders
The Templar Order 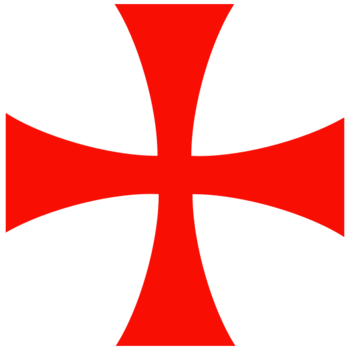 The Templars' Insignia
"May the Father of Understanding guide us."

Also known simply as the Knights Templar, the Templar Order is a monastic military order-turned-mythical shadow government who in modern times, founded and control a multinational corporate conglomerate called Abstergo Industries. Before its official founding as a knightly order, they were known under various names, including the Children of Cain and the Order of the Ancients. The Templars seek to create a perfect world, although their interpretation thereof directly contrasts with the ideals of their sworn enemies, the Assassin Brotherhood.
Whereas the Assassins assert that utopia can someday be achieved through a gradual process of learning tolerance and mutual understanding, Templars classically insist that human nature is too prone to corruption for this to be a possibility. Key to their dream is the imposition of a New World Order, and they envision that true peace can only come when all of humanity is shepherded by an enlightened society of people—in their eyes, them.
Because of this conflict in ideology, the Templars became involved in a covert war against the Assassins, spanning millennia and continuing into the modern era. The Templars have also become enemies with the Instruments of the First Will, a cult who have sworn their lives to restore Isu rule over humanity.

The Order as a whole

An ancient order founded by Smenkhkare in 1334 BCE during Egypt's 18th dynasty for the purposes of obtaining Isu technology, they have warred with the Assassin Brotherhood throughout history over control of the Pieces of Eden, in the hope of establishing a One World Order that would eliminate The Evils of Free Will, while also putting them in charge of the planet. They have operated under many names, including the Order of the Ancients, SPQR, the Château Clique, the Secret Chiefs, and Abstergo Industries in the 20th and 21st centuries. During their eternal war with the Assassins, they have been both forced into hiding or dominant, with the Templars currently holding the upper hand in 2012, with the Assassin Brotherhood scattered and being systematically hunted down.

General of the Cross

General of the Cross

The General of the Cross

The true leader of the Templar Order, the General of the Cross approves or refuses decisions made by the Guardians.

"Corruption is no different than cancer. Cut out the tumors, but fail to treat the source and... well, you're buying time at best. There's no true change to be had without comprehensive, systemic intervention."

A Templar scientist and the presumed creator of the Animus. He is in charge of experimenting on the various Animus subjects and related projects. Desmond escaped his "care" at the beginning of the second game, and Vidic is understandably pissed. 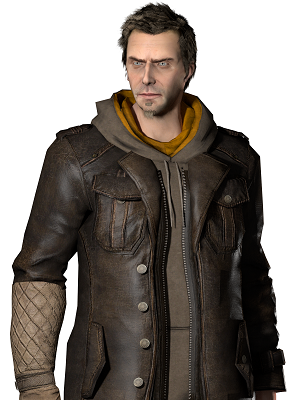 The great-grandson of Russian Assassin Nikolai Orelov, Daniel was experimented on by Vidic as a child and given subliminal orders to infiltrate the Assassins, locate their camps, and assassinate The Mentor before returning to Abstergo. The plan worked perfectly, and Daniel returned a hero to the Templar Order, rising up into the Inner Sanctum and becoming one of the heads of their Operations department. 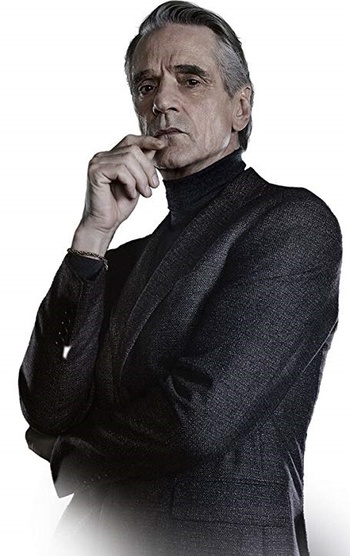 "We are making history here, the past is largely irrelevant."

A member of the Templar Inner Sanctum and CEO of Abstergo Industries, and one of the three Guardians who reports directly to the General of the Cross themselves. He is the father of Dr. Sofia Rikkin.

A member of the Templar Inner Sanctum and one of the heads of Abstergo's Operations Division, based out of Philadelphia, Pennsylvania. In this capacity, she oversaw the search for William Miles and ordered a team of Master Templars to find and capture him. She also oversaw the Sample 17 Project at Abstergo Entertainment, which she used to hunt for the Observatory. 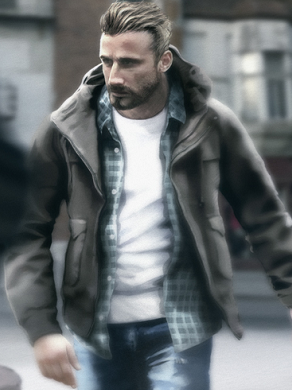 A Finnish ex-special forces soldier and high ranking Templar agent under consideration for induction into the Inner Sanctum, which he joins in December of 2012. The multiplayer storylines in Brotherhood and Revelations tell part of his story in rising the ranks of the Templar Order. As of Rogue he has joined Abstergo Entertainment under the cover of a contractor. 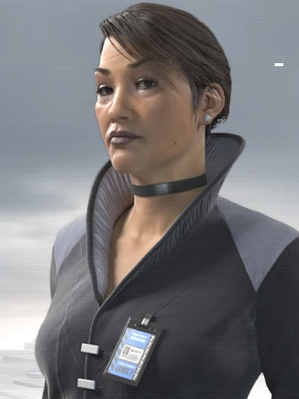 An Operations Executive in the Historical Research division of Abstergo Industries, and a member of the Inner Sanctum. During Syndicate she searches for the Shroud of Eden. 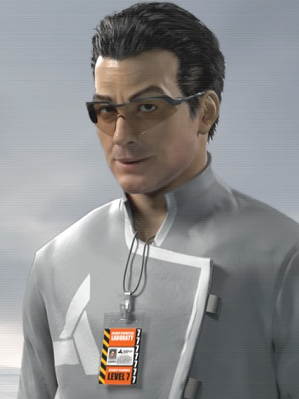 A Mexican Research Executive in the Future Technology division of Abstergo Industries, and a member of the Inner Sanctum. He runs the Phoenix Project, Abstergo's attempt to fully sequence an entire First Civilization genome. 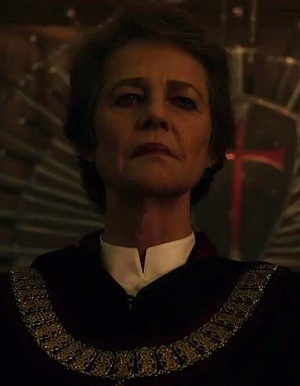 The chairwoman of the Board Of Directors of Abstergo Industries, and the leader of the Council of Elders of the Templar Order. 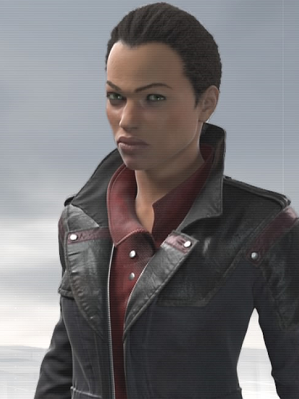 Violet Da Costa is a Canadian "consultant" sent by Laetitia England to Abstergo Entertainment after the events of Assassin's Creed IV: Black Flag. She was a member of Juhani Otso Berg's Sigma Team, serving as tactical support.

One of the Templars working under Juhani Otso Berg in the reformed Sigma Team. 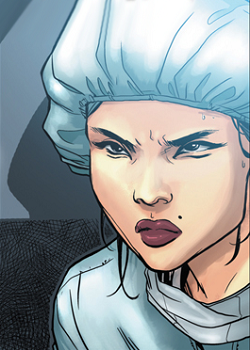 A Templar operative and trainer stationed in Italy who dislikes Daniel Cross.

A high level Templar who works as a medical examiner in the Lineage Research and Acquisition department of Abstergo Industries.

A Justice on the United States Supreme Court during the late 20th and early 21st centuries. 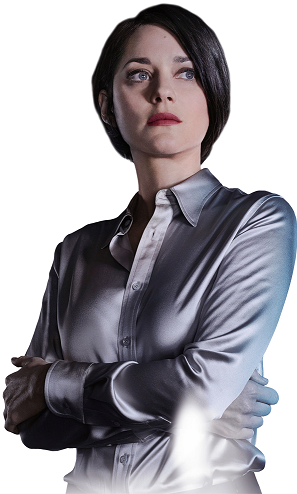 "You're not a prisoner here, Callum. I'm here to protect you."

A scientist and the head of the Abstergo Foundation Rehabilitation Center in Madrid. She is the daughter of Alan Rikkin, the Chief Executive Officer of Abstergo Industries and a member of the Templar Order's Inner Sanctum. 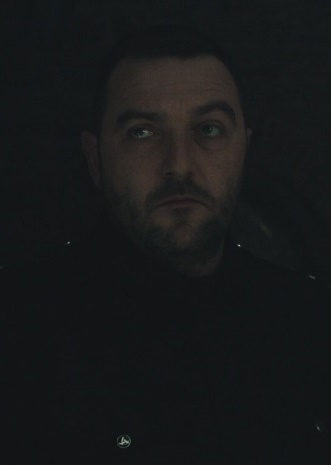 The bodyguard of Alan Rikkin and the Chief Security Officer of the Abstergo Rehabilitation Center of Madrid.

The eldest son of Adam and Eve, he murdered his brother Abel for a Piece of Eden and founded the Templars.

An Egyptian pharaoh of the 18th dynasty during the Amarna Period. Despite his short-lived reign and untimely death, he was the founder of the Order of the Ancients, the precursor to the Templar Order.
Arthur Pendragon

The legendary founder of the Kingdom Of Britannia and the Knights of the Round Table who was eventually betrayed by some of his loved ones at the Battle of Camlann.
Jacques de Molay

The last public Grand Master of the Templar Order in the early 14th century, he ordered his followers into hiding and to operate secretly before being put to death by the Assassin ally King Philip IV of France. The modern day Templars recognize him as a hero. 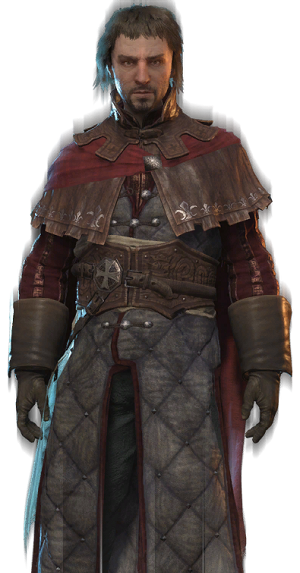 Esquieu de Floyrac was a French Templar that served under Grand Master Jacques de Molay, who would eventually betray the latter after being expelled from the Templar Order.

An unknown Templar Knight during the 14th Century who was entrusted by Jacques de Molay with a Sword of Eden and his Codex to hide from the Assassins during the French raid of their headquarters.

The last emperor of the Byzantine Empire and secretly a Templar, who died during the Fall of Constantinople. 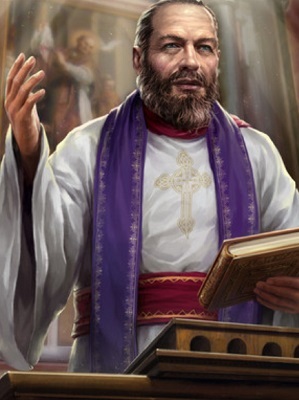 A Neapolitan Jesuit missionary and Templar who helped supervise the introduction of Catholicism in the Far East, most specifically in Japan, during the Sengoku Period of the late 16th Century. 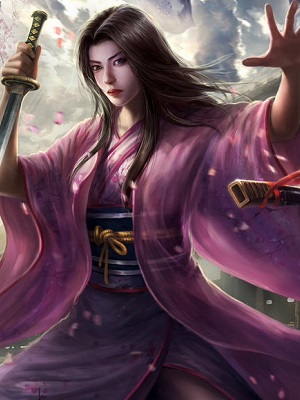 "The illusion of free choice, a magnificent tool for control, is it not?"

A Japanese noblewoman during the Sengoku period of the late 16th Century who was recruited by the Templars due to her information network of kunoichi, and their inability to properly infiltrate Japan due to its insularity and constant clan warfare. She was eventually assassinated by the Assassin Hattori Hanzo sometime during the 1590s. 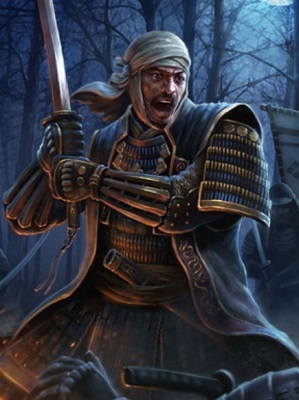 The head of the Uesugi clan during the Sengoku Period and a member of the Templar Order, who was assassinated by the Assassin Hattori Hanzo in 1578 with the help of Honda Tadakatsu.

Appears in: Assassin's Creed: Fragments - The Blade of Aizu

The right-hand man of Harry Parkes, the British Consul to the Tokugawa shogunate of Japan. He is tasked with restoring the power of the nearly-defunct Japanese Templars and obtaining the Musashi Masamune from the Assassins.

Albert was a Templar who served as a German general in World War I. He was assassinated on December 25, 1914 by a British Assassin serving as a medic in the British Army.

A feared figure among the Templar ranks, the Black Cross was dispatched to hunt down any Templar who strayed from the path, and kill them. The last recorded one was Albert Bolden, a WW1 veteran who disappeared in Hong Kong in 1927.

Edison was one of the leading Templars of the early 20th century, and led the discrediting of Nikola Tesla as well as the set up to World War II. He later became one of the founders of Abstergo Industries.

Ford was an associate of Edison, and held the Fourth Apple for some time before sending it to Hitler. He later became one of the founders of Abstergo Industries.

One of the conspirators behind World War II, Hitler used the Fourth Apple to gain control of Germany and institute the Nazi regime. He was killed by the Assassins on April 30, 1945, and they took the Apple for the Assassin Order.

The Templar leader in charge of the Soviet Union during World War II. He was killed by the Assassins on March 5, 1953.

The 36th President of the United States, he came into power after helping in the assassination of John F. Kennedy to prevent a joint United States and Soviet Union mission to the moon.