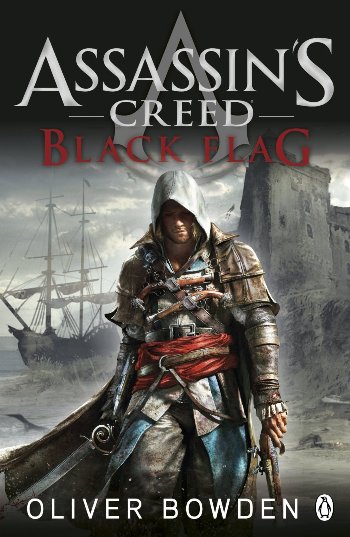 Assassin's Creed: Black Flag is a novel written by Oliver Bowden, released in the UK on 7 November 2013 and the US on 26 November 2013. The novel focuses on the events of the game of the same name.
Advertisement:

The Golden Age of Piracy — a time when greed, ambition and corruption overcomes all loyalties — and a brash young captain, Edward Kenway, is making his name known for being one of the greatest pirates of his time. In the brilliant new novel, Assassin's Creed: Black Flag, discover the story of how Edward, a young privateer, became one of the world's most deadly pirates and was drawn into the centuries-old battle between the Templars and the Assassins.

The book is technically a prequel to Assassin's Creed: Forsaken, which first dealt with Edward's backstory. It also has canonical status, at least for the events that don't appear in the game itself, as per writer Darby McDevitt and in fact an excerpt from this book can be found in one of the hacked computer puzzles in the Present Day story of the Main Game at Abstergo Entertainment. Specifically Chapter 3, which details Edward's first meeting with his wife Caroline.

Tropes appearing in the book: