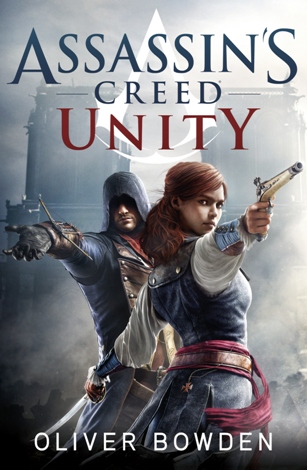 Assassin's Creed: Unity is the novelization of the game of the same name, written by Oliver Bowden. It was published on November 11, 2014, the day of the game's release.

Like the game, it chronicles the events of the French Revolution, however, following in the vein of Assassin's Creed: Forsaken, it provides us Another Side, Another Story of the campaign in the main game. We follow the adventures of Élise de la Serre, the Deuteragonist of the main game, the Templar daughter of Grand Master François de la Serre, as retold in her journal.

Élise enjoys a life of privilege afforded to the daughter of the nobility under the Ancien Régime; however, from very early, she begins questioning the Gilded Cage of her lifestyle and seeks to engage with people in a meaningful way. This inquisitive spirit helps her very much when she starts her initiation into the rites of the Templar Order. Nothing lasts forever, though, and the arrival of the Revolution creates a schism in the Templar Order. Her best ally is her childhood friend and secret boyfriend Arno, who has joined the Assassins.