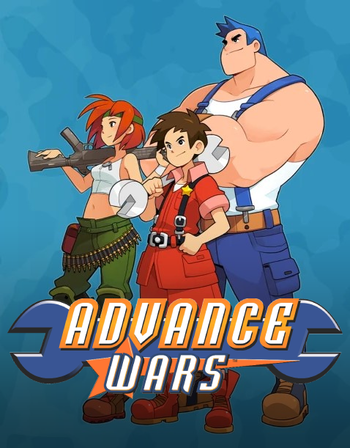 The Nintendo Wars seriesnote better known as Famicom Wars in Japan and Advance Wars internationally is a series of military Turn-Based Strategy video games produced by Nintendo that began in 1988. A majority of the series' entries are developed by Intelligent Systems, with a number of other installments being created by Hudson Soft (the final three Game Boy Wars games), Kuju Entertainment (Battalion Wars games), and WayForward Technologies (the 2022 remake).

In the games, the player takes the role of an army's commanding officer (usually of a country called Orange Star), with the goal on any given map being to defeat an opposing CO. Using your various unit squadrons, including infantry, tanks, artillery, bombers, etc., you attack the units and capture the areas controlled by your opponent. Depending the map, victory is achieved through either capturing the enemy base or eliminating all enemy forces. It's basically Fire Emblem, only with modern war weapons, and with less influence of a Tactical Rock–Paper–Scissors (not coincidental, since Intelligent Systems created both series). Every entry also offers multiplayer, with latter games allowing up to four players to do battle on versus maps.

The series is composed of the following games, with most of the titles being named after the platform they were released on:

The original Famicom Wars had no plot at all. You would choose to control one of two rival armies, Red Star or Blue Moon, and fight off the other until completing all the maps. Super Famicom Wars is essentially a remake/sequel, featuring all the maps from the original, as well as brand new ones. It was also the first game to feature 4-player maps, with the Green Earth and Yellow Comet armies joining the battle, as well as selectable commanding officers (COs), each with their own specialty and weakness that affect the whole army.

The Advance Wars games for, obviously, the Game Boy Advance, were the first games to be released internationally, as well as the first to have an actual plot. It and the two after it make up a trilogy involving the Black Hole army. Oddly enough, the first Advance Wars was for a couple of years not released in Japan, only showing up in a compilation pack with its sequel. The Advance Wars name has stuck in America even as the series moved to the DS, while Japan reverted to the name Famicom Wars for the DS and Wii installments. The Advance Wars series expanded upon the CO system from Super Famicom Wars, giving each CO their own ability which they can summon during the brink of a battle in order to change the odds in their favor.

Advance Wars: Days of Ruin is a completely new continuity, set in a Darker and Edgier After the End world. With the new story comes a massive overhaul of the CO system as well as the units themselves.

The Battalion Wars games (which have their own page) are for the GameCube and Wii and are Real-Time Strategy games with a view and style more reminiscent of a Third-Person Shooter than an overhead game like Warcraft. They form their own separate continuity and story. In addition to commanding your forces in real time, all gameplay is from the point of view of a single unit that the player can switch between at any time, while at the same time actively controlling the viewpoint unit itself.

After a fourteen year hiatus, Advance Wars 1+2 Re-Boot Camp, a Video Game Remake of the first two Advance Wars games, was announced for the Nintendo Switch at E3 2021, and is currently scheduled to release Spring 2022, delayed from a December 2021 release.

There are two wikis for the turn-based games, here

, of course. Battalion Wars also has its own wiki

Not to be confused with The Console Wars.

The various games provide examples of: