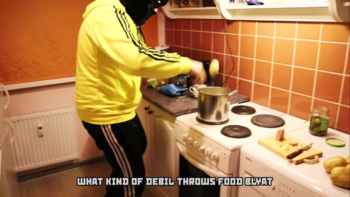 Yeah, who'd throw food into a pot, like this?note debil (дебил) means "moron", blyat (блять) means "fuck" or "damn"
Chandler: I walk into a room, and he won’t even talk to me. He just mumbles something in Italian. And I know he only knows the bad words.
Joey (later to Chandler): Va fa Napoli, ah! translation literally, “Go to Naples!” which is a Tuscan insult meaning “Go to hell!”
— Friends, "The One with Chandler in a Box"
Advertisement:

The use of foreign curses that, in their country of origin, would be considered much more offensive to use on television or outright censored. Sometimes the pronunciation is deliberately mangled to obscure it even more.

Compare Pardon My Klingon, Unusual Euphemism, Did Not Do the Bloody Research, and Foreign-Language Tirade. Sometimes an adjunct of Poirot Speak. Often a way of Getting Crap Past the Radar.

open/close all folders
Anime and Manga
Japanese media likes to use Gratuitous English, including gratuitous English swearing, because it sounds cool to Japanese ears — even though the swearing can sometimes be rather strong to English ears. Sometimes they even use English swearing gestures like Flipping the Bird as an expression of general displeasure, even in works for younger audiences. Localizers, knowing that wouldn't fly in the Anglophone world, will often edit the fingers out, which is understandable.
Comedy
Comic Books
Advertisement:
Fan Works
Film
Literature
Live-Action TV
Multiple Media
Music
Professional Wrestling
Theatre
Video Games
Visual Novels
Webcomics
Web Original
Western Animation
Real Life