Voiced by: Jo Wyatt (female Agent), Bertie Carvel (male Agent)
"Controlling an empire takes more than raw power. It takes discipline, focus, and precision. Threats must be dealt with quickly and quietly. This is the mission of Imperial Intelligence. As the Empire's most elite agent, I will trace the line between truth and treachery. And I will ensure the Empire achieves galactic domination." 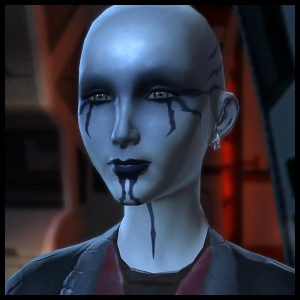 Voiced by: Tasia Valenza
"I avoid Imperial space. I wanna die in a cantina fight, not ticking off some Imperial bureaucrat."

A female Rattataki and companion to the Imperial Agent, Kaliyo is an "anarchistic" freelance criminal, known to associate with three individuals named Anspi'shel, Nohn Veyaiko, and The Wheezer. Potential love interest for male Imperial Agents. Mechanically, she was the class's ranged tank companion.

In Knights of the Fallen Empire, Kaliyo has become the infamous terrorist "Firebrand", launching a one-woman guerrilla campaign against Zakuul. 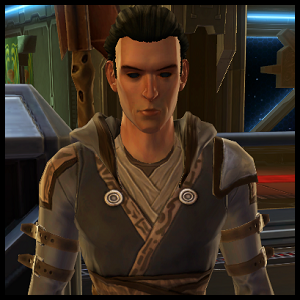 Voiced by: Ifran Meredith
"As herald we are more than a typical Joiner, and we retain a sense of individuality. It's also why we're useful to you."

A male human Imperial diplomat who was assimilated by a Killik hive as a Joiner and subsequently recruited by the Imperial Agent on Alderaan. Holds the position of Dawn Herald, an advanced scout and diplomat of the Killik and thus granted greater autonomy and individuality than most Joiners. Potential love interest for female Imperial Agents. Originally, he was the class's melee damage companion. 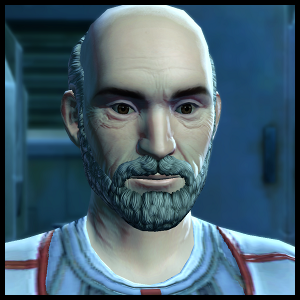 Voiced by: Anthony Cochrane
"Perhaps it's the fever talking, but in truth… The experience is intense and personal. There's a loss of control, and I wonder if I am man or beast."

A male human biochemist formerly affiliated with Imperial Intelligence, Dr. Lokin's agenda and past are a mystery to most. By far his most remarkable—and disturbing—development is his ability to shapeshift between human and rakghoul form. The Imperial Agent recruits him on Taris. In his human form he is a healer companion, while in his rakghoul form he focuses on melee damage.

In Knights of the Fallen Empire, Lokin has retired to Alderaan to continue his research on Rakghouls while also seeking a cure to a terminal disease brought on by his tampering with his own DNA. He can be recruited as part of an Alliance Alert where the Outlander must help him gather materials to synthesize a cure. 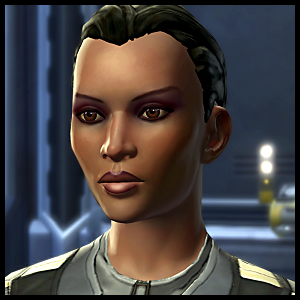 Raina Temple is an enigma: a human raised among Chiss and a member of the Chiss military. She is actually the Force-sensitive daughter of Imperial Intelligence agents who sent her to be raised by the Chiss when she was discovered to be Force-sensitive rather than have her be taken by the Sith. She is recruited on Hoth. Romance option for male Imperial Agents. Originally, she was the class's ranged damage companion. 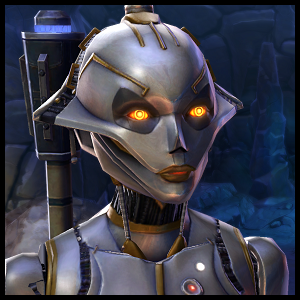 Voiced by: Deborah Unger
"I am no droid, Outlander. I am an intelligence beyond comprehension. You may call me SCORPIO."

A female-looking assassin droid (though she disdains the term) and a companion character for the Imperial Agent. "Recruited" by the Imperial Agent on Belsavis, not that she likes it at all. Originally, she was the Agent's melee tank companion.

In Fallen Empire, she becomes The Lady of Sorrows, a crimelord who rules over Zakuul's underworld. She joins the Outlander out of a personal vendetta with Arcann. 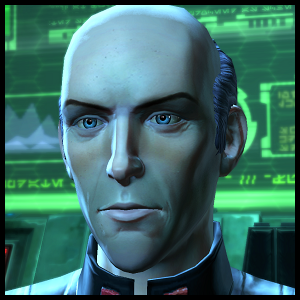 Voiced by: Francis Guinan
"This isn't glamorous work. We're sanitation workers—we clean up after the military and the Sith and do the jobs no one else will. Without us, though, the Empire falls apart. So we do whatever is necessary—even if it's thankless and ugly."

The head of Imperial Intelligence. A ruthless and pragmatic man who is only known by his codename. He has managed to maintain his position for over a decade, a difficult accomplishment considering his employers. 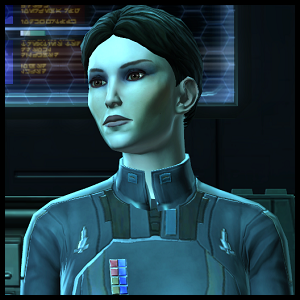 A data analyst of Imperial Intelligence. She is the product of an Imperial eugenics program designed to create the ultimate data analyst. She serves as mission control for the Agent. A minor romance option for male Agents. 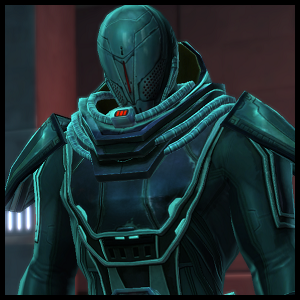 Voiced by: Stephen Rashbrook
"Come. Stand before me, and revel in the power of the Dark Council. Allow your body to betray you. Allow your blood to boil, and your heart to slow. Everything that is not of the dark side will be purged—or it will be tainted."

A member of the Dark Council and head of the Imperial Intelligence network, controlling it through various liaisons, Darth Jadus sired Zhorrid, a daughter who would become his only known apprentice. A prominent yet enigmatic figure among the Sith, Darth Jadus was known for showing more self-restraint than his fellow Lords, rarely succumbing to the passions and emotions that powered the dark side of the Force. He is suddenly assassinated at the end of the Agent's prologue and the Agent is promoted to Cipher to avenge him. 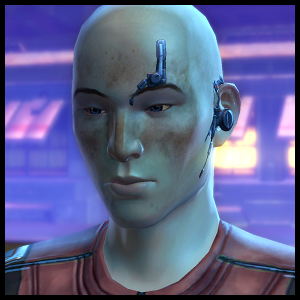 A product of an Imperial eugenics program. The individual codenamed Watcher X was a member of Imperial Intelligence until he was deemed unstable and sent to the Empire's Shadow Town prison on Nar Shaddaa. He is ordered to help the Agent with their business on Nar Shaddaa. 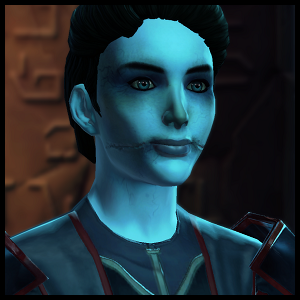 "I earned my place on the Dark Council, and I won't share my father's fate."

The daughter of Darth Jadus, Zhorrid is insane even by the standards of the Sith. She succeeds her father as a Dark Councillor after his sudden assassination. 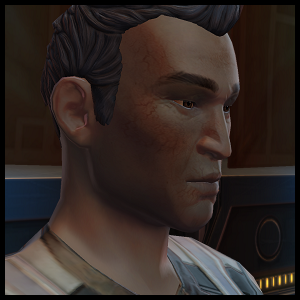 A 54 year old human spymaster and former Jedi for the Strategic Information Service, the Republic's counterpart to Imperial Intelligence. He specializes in converting enemy agents into friends and creating subversion and rebellion. Much of his past is unknown, as is how he came to lead an SIS unit. The Republic believes he is the key to winning the war, and Imperial Intelligence dispatches the Agent to ensure they aren't right. 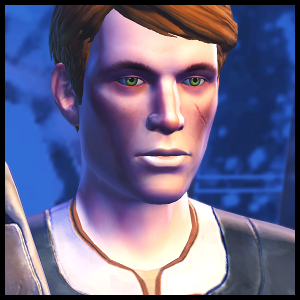 The codename of a member of Ardun Kothe's SIS cell. Hunter is a ruthless agent who has a bizarre hatred for Cipher Nine. 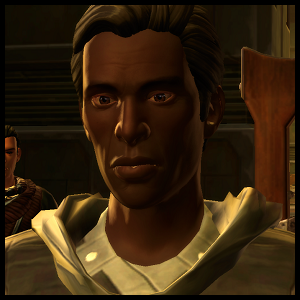 An anti-Imperial terrorist who was considered to be of little consequence by Imperial Intelligence until his organization destroyed the flag ship of Darth Jadus, killing the Dark Councilor and over 3,000 people who were on board the ship. The Agent's first task upon being made a Cipher Agent is to destroy his organization.

"Our purpose was noble. We assembled to save civilization after the Jedi and Sith nearly destroyed it!"

A mysterious organization that the Agent comes into conflict with.