Voiced by: Xanthe Elbrick (female Inquisitor), Euan Morton (male Inquisitor)
"The true power of the Dark Side... it is claimed by many, yet known by few. My potential promises so much more. I know that treachery can break even the mightiest foe. And, for those who study its secrets, the Force offers... unlimited power..."

An Imperial slave discovered to be strong in the Force, the Sith Inquisitor is sent to Korriban to become a Sith or die trying, and subsequently delves into the darker mysteries of the Force. 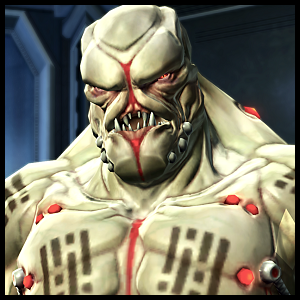 "I am not a monster. I am Khem Val, servant of Tulak Hord, devourer of the rebels at Yn and Chabosh, consumer of the Dromund system. And I am hungry."

manservant. Originally, he was the Sith Inquistor's melee tank companion.

Voiced by: Steve Blum
"Where I come from, man takes your dignity, you break his teeth."

A human ex-pirate, attempting to hunt down the members of his mutinous former crew, and recruited on Tatooine. Potential love interest for female Sith Inquisitors. Originally, he was the class's ranged damage companion. 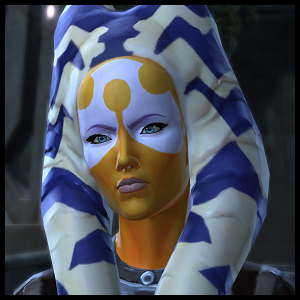 A Togruta Jedi Padawan whom the Sith Inquisitor encounters on Taris, manipulates into falling from the Jedi Order, then guilts into joining the Inquisitor's band. Ashara is the token light-sider in the group and remains a dedicated adherent of Jedi principles despite her new company... initially, later embracing Sith principles while still adhering to a vision of hope and peace. Romance option for male Sith Inquisitors. Originally, she was the class's melee damage companion.

A human male of the Imperial Reclaimation Service, the Empire's military branch that focuses on acquisition of long forgotten technologies, ancient artifacts, and Force history. A somewhat eccentric, though highly knowledgable and renowned archaeologist, Talos Drellik joins the Sith Inquisitor on Hoth. While lacking Force sensitivity, he has a tremendous passion for Sith history and information. He seeks knowledge for the simple sake of uncovering knowledge, and tends to brush off the notion that some things are just too evil or dangerous to learn about. Originally, he was the class's healer companion.

In Knights of the Fallen Empire, Drellik is found on Yavin IV continuing his studies on Sith artifacts and can be recruited by an Outlander once they help him finish his research (alternatively, an Inquisitor can get him to drop everything and return to their service). 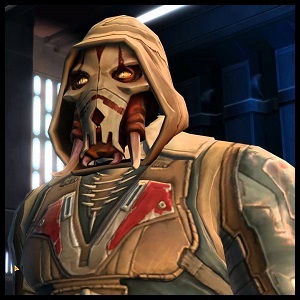 Voiced by: Tony Armatrading
Xalek: "You are a great warrior. I will follow you to death."
Kallig: "Mine or yours?"
Xalek: "Whoever is weakest. That is the Sith way."

A male Kaleesh Sith Acolyte, and the Sith Inquisitor's Apprentice who joins on Korriban late in the story. Originally, he was the Inquisitor's ranged tank companion.

In Knights of the Fallen Empire, Xalek has now become a Sith Lord and is found seeking vengeance on miners on Ilum who have desecrated his father's tomb. He can be recruited upon defeating him in battle. 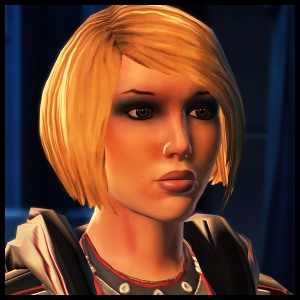 Voiced by: Jen Cohn
"Her words smell of honey and taste of poison."
—Aloysius Kallig

A human Sith Lord who's trying to unlock the secrets of Tulak Hord's ancient artifacts. She takes the Inquisitor on as her apprentice. 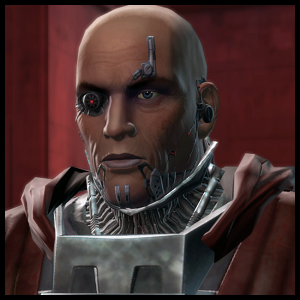 A cybernetic Sith Lord and a sort of rival to Lord Zash. 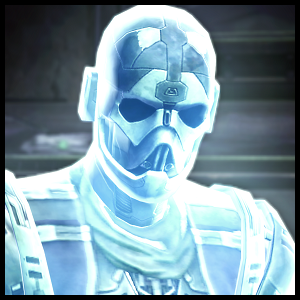 "Easily the most ambitious, and therefore the most dangerous, of my rivals is Kallig. Therefore, he shall be the first to die."
—Tulak Hord

A Force Ghost (or Sith equivalent) of an ancient, all-but-forgotten Sith Lord. He occasionally offers the Inquisitor advice.
Harkun 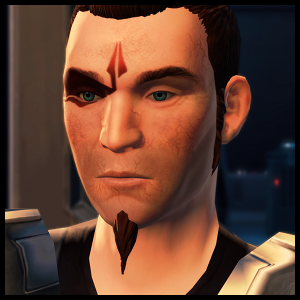 "You are the slime, the filth, the wretches of society. You are what Sith Lords scrape off their boots. I don't know why the Sith Empire even bothers with you. Miserable curs. They'd be wiser to give you shovels and have you dig your own graves."

The Sith Inquisitor’s first master, an Academy Overseer in charge of finding an apprentice for Lord Zash. A traditionalist forced to work with Force-sensitive slaves. He hates the Inquisitor from the beginning.

Save your well-wishes, slave!

The Rival for the Sith Inquisitor at the Academy, and Teacher's Pet to Harkun.
Darth Thanaton 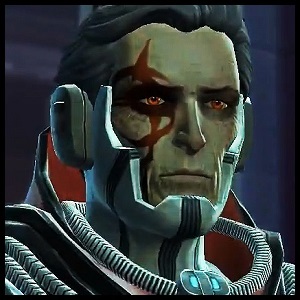 "Philosophy gives structure to the delicately ordered chaos of our Empire. Tradition. Principles. History. The threads that compose our society."

A Sith Lord who fought in the Great Galactic War. As an apprentice, he learned the ways of the Sith under Lord Calypho and was frequently accompanied by a male Abyssin slave named Maggot. After the arrest of Lord Calypho, Kel was sent on a mission by the Dark Council to hunt down the Emperor's traitorous apprentice, Exal Kressh. After the success of his mission, Kel returned to the Dark Council and demanded to be granted the title of Dark Lord and be renamed Darth Thanaton.

Moff Pyron rose to prominence in an Empire that was in flux. One of the youngest officers to achieve the title of Moff, Pyron felt it was his duty to fulfill his commitment as a soldier and not get involved in Sith affairs. He held fast to this policy, until Darth Thanaton canceled his pet superweapon project–the Silencer. Believing that Darth Thanaton’s motivations for canceling the Silencer project–an insistent reliance on Sith tradition and the use of the Force over new technology–were ultimately self-defeating, Moff Pyron decided it was time to seek alliances elsewhere among the Sith. He had come to realize that both his own advancement and that of the Empire depended on realigning one’s most deeply held principles.
Major Bessiker 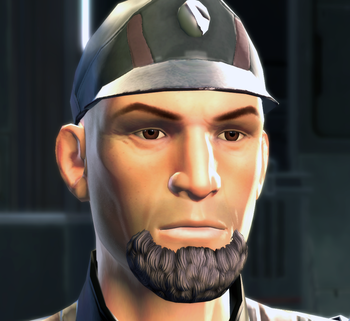 A proud Imperial officer who rose to notoriety during the Sith’s return to the galaxy, fighting with distinction at Coruscant and Begeren, Major Bessiker was made chief supply officer on Balmorra near the end of the war. As the Empire has provided fewer and fewer resources to support the ongoing pacification of Balmorra, Bessiker has almost single-handedly propped up the Imperial war effort, scavenging and repurposing old equipment and improvising armor and weaponry in a pinch. Bessiker comes from a distinguished Imperial lineage, and in spite of his connections among the Sith – both his brother and his son trained on Korriban – Bessiker has never complained about his posting on Balmorra or the difficulty of his job.

Since rising up from the Korriban Academy, Lord Skar has been Darth Thanaton’s apprentice. A valiant general and unparalleled lightsaber duelist, many have marveled that Skar has never moved against his master. In truth, Skar finds the life of a scheming Sith Lord distasteful, and prefers the more visceral thrill of battle to the political machinations of a Darth. But that is not to say that Skar lacks ambition, and he has been responsible for his fair number of betrayals and dead rivals over the years.
Inquisitor Zyn

A literal Sith Inquisitor who works as an interrogator at the Korriban Academy. During the protagonist's training on Korriban, Inquisitor Zyn is tasked by Lord Zash and Overseer Harkun to break the protagonist out of their old slave mindset, by administering a trial designed to teach them how to control others as they were once controlled. Polite, affable, and friendly, he is satisfied with the protagonist's progress in the trial regardless of how they conduct themselves, and sends his approval to Harkun, paving way for the Inquisitor's next trial.
Urtel Moren

A male human Sith stationed on Alderaan, where he acts as a body guard to Elena Thul. He claims to be an admirer of the Sith Inquisitor's work, and asks seemingly innocent questions about whether and how they killed Darth Skotia. An Optional Sexual Encounter for female Sith Inquisitors. 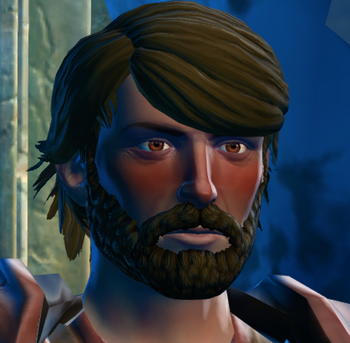 Voiced by: Yuri Lowenthal
The youngest son of the third brother of the lord of House Organa, Nomar Organa showed Force sensitivity at a young age and was given to the Jedi Order as a gift by his uncle. As a young man and Padawan, he returned to Alderaan for the first time and soon fell in love with a daughter of House Rist. At the time, House Rist was weighing an alliance with House Organa and both houses saw the match as an opportunity to seal their relationship. But the Jedi Order refused to consent to such a politically burdensome marriage; Nomar broke off the engagement and has served the Jedi Order dutifully ever since.

For much of his youth, Lord Paladius led an undistinguished career as a charismatic but petty Sith Lord. Uninterested in conquest or the pursuit of dark side knowledge, he left Imperial space for Nar Shaddaa and found a world ripe for his brand of manipulation. Becoming the leader of the Cult of the Screaming Blade has allowed Lord Paladius to enrich himself personally, expanding his collection of art and antiquities and living off the fruits of his cultists’ mad devotion.
Rehanna Rist

Twin sister of Markos Rist, Lady Rehanna Rist is an enigmatic figure among the nobility, preferring her work training House Rist’s renowned assassins to the politics of court. A dangerous woman in her own right, Lady Rist is known for her tough, cold demeanor and for the many suitors she has rejected over the years. While her brother would prefer that she marry and raise House Rist’s profile on Alderaan, Rehanna is stubborn in her refusal, and her brother does not dare force her.
Destris Veran and Rylee Dray

Former cultists of the powerful and charismatic Sith Lord Paladius, Rylee Dray and Destris Veran fled into hiding on Nar Shaddaa to escape the Sith Lord’s wrath. A clever but shy slicer, Rylee is drawn to power, while her companion Destris imagines himself someday becoming the ruler of his own cult. They are an unlikely pair, drawn together only by their disillusionment with the false promises of Lord Paladius and eager to find a new leader to follow.
The Mother Machine

Before humans and Twi’leks, Rodians and Hutts, Chiss and Sith, there was the Rakata Infinite Empire. The Rakata used their Force sensitivity to seize power and subjugate all in their path, but as time went by, they began to lose their connection to the Force and appeared to die off. In reality, a few Rakata lived on, and in the ancient prison on Belsavis they continued experiments designed to restore their Force sensitivity. At the heart of these experiments was a device designed to create new Force-sensitive species–the Mother Machine. A sentient artificial intelligence, the Mother Machine gave herself the name Ashaa and felt a strong connection to each species she created–from Twi’lek to Esh-kha–growing ever more furious at the Rakata who enslaved her and imprisoned her “children.” The Rakata who created her maintain that the Mother Machine is merely mimicking the idea of motherhood, and that the connection between the machine and her children is purely fabricated; deep down, they claim, the Mother Machine is just that–a machine, heartless and incapable of real empathy.