Grand Champion of the Great Hunt

Voiced by: Grey DeLisle (female Hunter), Tom Spackman (male Hunter)
"The only law in this galaxy is the one a man makes for himself. The Sith may say otherwise, but even the Empire's reach has limits. That's why they hire bounty hunters. If you've earned a death mark, we'll be seeing each other... real soon. Don't let it go to your head, though. To me, you're just another job."

A freelance gun for hire who attracted the attention of a legendary retired bounty hunter named Braden, the Bounty Hunter's story begins with gaining entry into the Great Hunt, a deadly competition of the galaxy's greatest bounty hunters organized by the Mandalorians, then entering the competition. 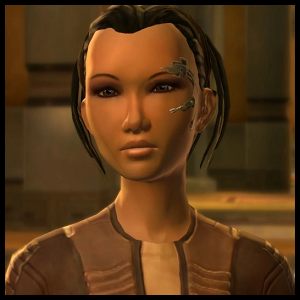 The first chronological companion character for the Bounty Hunter, Mako is a human female hired by Braden to provide intel and tech for those participating in the Great Hunt. Romance option for male Bounty Hunters. Originally, she was the Bounty Hunter's healer companion. 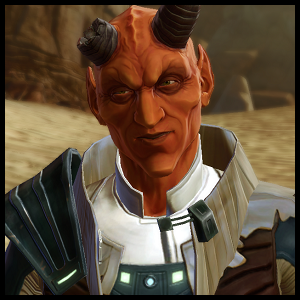 A Devaronian companion acquired on Tatooine, Gault is a professional smuggler, con artist, and general scoundrel. His real name is Tyresius Lokai, a target of the Great Hunt. He fakes his own death and joins the Bounty Hunter rather than continue to live the life of a hunted man. Originally, he was the Bounty Hunter's ranged damage companion.

In Knights of the Fallen Empire, he's gone back to running heists and is recruited by Hylo to raid Arcann's treasury ship to fill the Alliance's coffers. 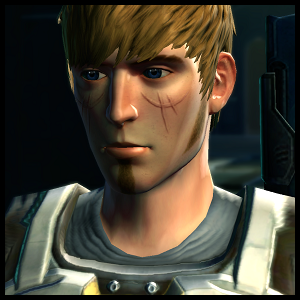 He returns in Knights of the Fallen Empire, having joined Mandalore the Avenger's war against the Eternal Empire and later joining the Alliance as Mandalore's representative. 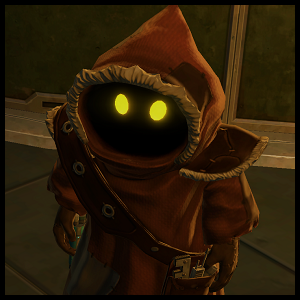 In Knights of the Fallen Empire, he is now a bounty hunter himself leading an all-Jawa crew. 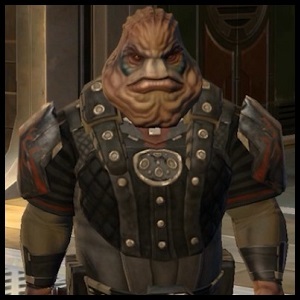 "This is the way to do it! Doin' what we want, when we want, ain't nobody gonna say otherwise."

A male Houk that worked under Nem'ro the Hutt, Skadge is a companion character for the Bounty Hunter and acquired on Belsavis. He was betrayed by his Hutt boss at one point in his life. He then moved on to become a street boss of the Black Suns after leaving Nem'ro's service. Originally, he was the Bounty Hunter's melee tank companion.

In Knights of the Fallen Empire, Skadge returns to leading the Black Suns in Nar Shaddaa, now waging a war against Rusk's Legion of the Dead. 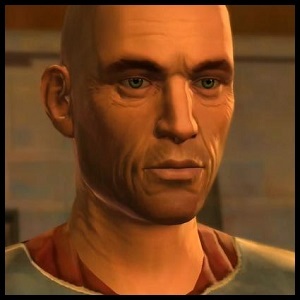 Braden's long and storied career has never quite reached the heights of notoriety it deserved. For more than twenty-five years, Braden has claimed hundreds of bounties for clients ranging from the infamous crime lord Nok Drayen to generals in the Republic military and Jedi Masters with no one else to turn to. With his glory days behind him and his career in decline, Braden is looking for one last chance to shine before passing the torch to a new generation of hunters and retiring in some quiet corner of the galaxy.

He is your first supporting character and is trying to get the Bounty Hunter into the Great Hunt. He's killed by Tarro Blood right after you defeat your first target. 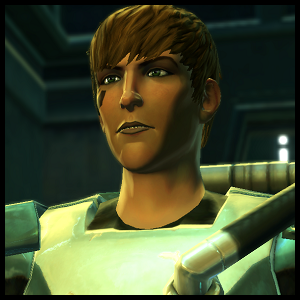 The son of Alderaanian nobility, Tarro Blood renounced his privileged existence as the heir to a minor lordship in favor of pursuing greater glory and fame as a galaxy-renowned Mandalorian mercenary. Leaving his past behind and taking on a new dramatic moniker, Blood was able to prove that he was no pretender after years of training under a famed Mandalorian champion. Under the guidance of this exceptional tutor, Blood became a feared warrior and the favorite to claim victory in the next Great Hunt. Unfortunately, Tarro Blood's characteristic arrogance and sudden rise to prominence rubbed his competition the wrong way. The other Mandalorians in the competition made it their mission to ensure that he never came close to claiming victory. The resulting defeat nearly cost Blood his life, in addition to his pride, and he has remained away from the public eye for nearly a decade.

He is the main antagonist for the Bounty Hunter in Act 1. 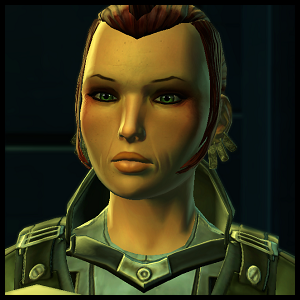 She is the Bounty Hunter's handler in the Great Hunt. She is quite friendly, and actually flirts with the male Bounty Hunter the first time she meets him.

They are the only other winners of the Great Hunt still alive (aside from Mandalore himself), mighty Bounty Hunters that get access to the Blacklist. Bloodworthy becomes your contact in Act II. He's later killed alongside The Defenestrator and Jewl'a Nightbringer at the end of Act II by a Jedi and a Republic squad that strikes your party. 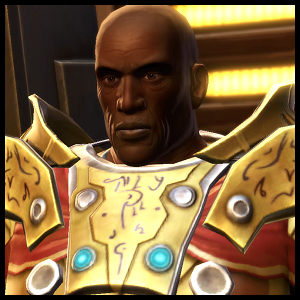 A Mandalorian male, Artus Lok eventually became the Grand Champion of the Great Hunt, and challenged Mandalore to a duel in the gladiatorial arenas on the planet Geonosis; he successfully killed Mandalore the Lesser and took the title of Mandalore the Vindicated. He began to consolidate his power over the Mandalorian clans, destroying an uprising led by Jicoln Cadera, who believed the Mandalorians should support the Republic. After defeating Cadera's faction, Artus ensured that his Mandalorians remained in the services of the Sith Empire.

Jicoln Cadera
A renegade Mandalorian and Torian's estranged father. He refused the call of Mandalore the Vindicated and formed his own faction, the Crusader's Schism, who agreed with his view that the Mandalorians should joint the Republic instead of the Empire. For this he was stripped of all honour and left to die on the planet Taris. When that didn't happen, he got a bounty put on his head only to kill everyone who came after him. He serves as the Hunter's mark on Taris. 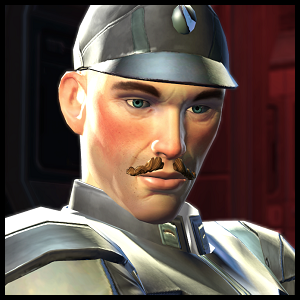 Depraved, unscrupulous and conniving, Lieutenant Major Pirrell is an ambitious but cowardly Imperial officer determined to advance up Balmorra's chain of command at any cost. Pirrell's service record in the Imperial Navy stands as a bland testament to the inevitability of a middling bureaucracy to exist anywhere; no matter where in the galaxy he was stationed, Pirrell always managed to find a position closest to the most influential members of command and farthest from any of the actual fighting.

He is your contractor on Balmorra, seeking to improve his status and position by using the Bounty Hunter to stop his military rivals achieving success with their's duties. In the end, Admiral Ivernus, the one that he is trying to impress, actually calls him out on this and tries to kill him, at the same time his lover is revealed to be the other Bounty Hunter in the Great Hunt seeking to get the bounty. 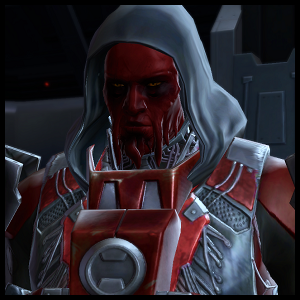 A cybernetic pureblood Sith Lord, Tormen agrees to host the Bounty Hunter after the Chancellor and the Jedi frame him/her for a kilometer-long list of crimes. Darth Tormen is a Sith with a single passion: war. Unlike many of his fellows, he has no interest or patience for intrigue, politics, ideology or self-indulgence; but that isn't to say he is not a thinking man. Tormen would simply rather have all the pieces laid out before him. Some have mistaken Darth Tormen's dislike of subterfuge for a sense of honor or respect for his enemies. Those who have crossed him know the reality: he takes his only satisfaction from engaging his enemies directly and ruthlessly crushing them, no matter how outmatched he may seem. 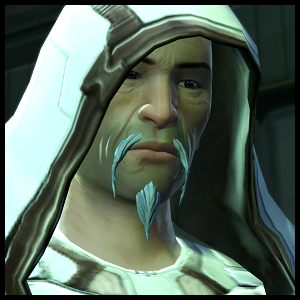 "You chose to murder Kellian Jarro. Just like you murdered everyone sent to bring you to justice. You could have surrendered at any time."
—Master Jun Seros to the Grand Champion

Jun Seros was a male Human Jedi Master who served the Jedi Order and the Galactic Republic as the Order's battlemaster during the Great Galactic War and the ensuing Cold War. Famed for both his skills with a lightsaber and his unending loyalty to the Jedi and the Republic, he was one of the Jedi Order's leading lights and Masters during the War and the Cold War that followed.