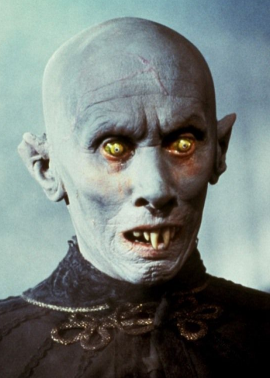 History time: In the original folklore, most vampires were peasants little different from the people they preyed upon. A succession of nineteenth century authors — Polidori, Rymer, Le Fanu, and ultimately Stoker — made them elegant aristocrats, whose attractiveness and dignified bearing disguised an inner corruption. And we all know what happened since.

In 1920, F.W. Murnau had a great idea. Since the German Expressionist movement was all about stylization, why not apply this to vampires? Why not create a vampire that looks the part of a monster, in this case like a humanoid plague rat? And so, Nosferatu got made, and very nearly destroyed.

But Murnau's character, Orlok, played by scary-ass stage actor Max Schreck, has become one of the most iconic vampires ever, and has spawned a flock of imitators, typically used as a contrast to the elegant, pretty vampires, who for some reason are more likely to be treated sympathetically, or at least respectfully.

In order to qualify as a character who Looks Like Orlok, they must possess some combination of the following:

A form of Our Vampires Are Different; see also Classical Movie Vampire (resembling Bela Lugosi, who codified the look). Compare Looks Like Cesare. Also known for their Pivotal Wake-up.