Girl of the Week
aka: Guy Of The Week 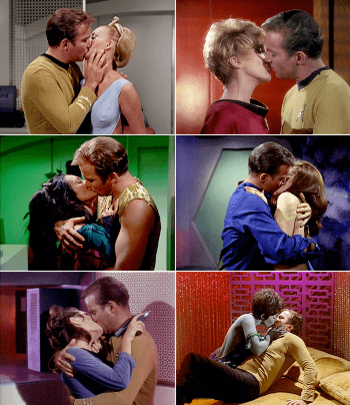 Kirk is forever consigned to only one true ship... The Enterprise.
Elliot: Don't go too quickly, or like I said, you'll just end up with another beautiful girl!
JD: "Dating my laptop."
Elliot: Dating your laptop. Thank you.
— Scrubs, "My Half-Acre"
Advertisement:

Like the Temporary Love Interest, this is a way to give the hero some romance for the episode while still allowing the focus of the show to be on the plot or the arc, but the Girl of the Week does not have to die at the end. The girl will be gone by the next episode, possibly because of a wacky misunderstanding a la the Three Is Company plotline, or a very minor flaw, but sometimes just not showing up again, with no explanation offered. This relationship will generally be rockier or less passionate than that with the Temporary Love Interest, allowing its end to be less dramatic. If someone is noted for getting extremely passionate about every Girl of the Week, sincerely believing each one in turn to be the love of their life but then forgetting all about them a week later, they're a Serial Romeo. Sometimes, particularly in a Walking the Earth series, there's no relationship, but the girl is shown having an obvious interest in the hero (which may be mutual) before he inevitably moves on.

If she survives longer than her initial appearance, Sudden Sequel Death Syndrome is likely.

Changes in social gender roles mean that it is starting to become acceptable for female protagonists to have relations with male guest cast members that fit into this trope, although examples are less likely to lead to actual sex and usually tend to be more emotionally significant than a pure one-night-stand.

If you were looking for Monster of the Week, Well, This Is Not That Trope.