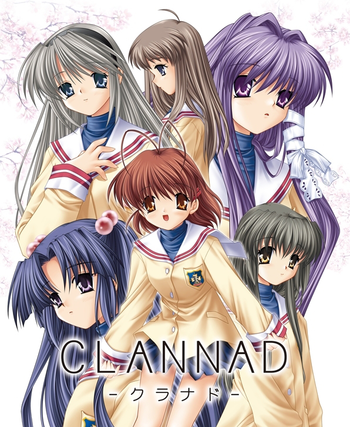 A few of your heroines in CLANNAD, clockwise from midnight: Yukine Miyazawa, Kyou Fujibayashi, Fuko Ibuki, Nagisa Furukawa, Kotomi Ichinose, Tomoyo Sakagami.
Nagisa: Do you like this school?
Tomoya: ...
Nagisa: I really, really love it. But nothing can stay unchanged.
Tomoya (internal monologue): A girl I've never seen before. The words weren't directed at me. She must be talking to someone in her heart.
Nagisa: Fun things... happy things... They can't all possibly stay unchanged. Even so, can you keep on loving this place?
Tomoya: Just find them.
(Nagisa, startled, turns to face Tomoya. They look at each other for the first time.)
Tomoya: Just find new fun and happy things. C'mon, let's get going.
We start to walk up... the long... long... uphill climb.
Advertisement:

Tomoya Okazaki is an ordinary high school senior who doesn't take his studies seriously. Always late for class, he's seen as a delinquent by the rest of his classmates, who are busily preparing for their college entrance examinations. He hates his life and the whole town, and the closest thing he has to a real friend is fellow delinquent Youhei Sunohara, who just barely manages to rise to the level of Butt-Monkey at the best of times. Tomoya is thoroughly miserable.

Then one day, while walking to school, he bumps into Nagisa Furukawa, a shy girl whose only friends at the school have already graduated. Whenever Tomoya sees her around school, she's alone; her classmates scarcely notice she exists, and no one has any interest in befriending her.

No one, that is, except Tomoya, who without even realizing it finds himself taking her under his wing. As he sets out to help her reestablish the school's drama club, he finds himself connecting (or, as it often turns out, reconnecting) with several other girls from the school. Although he doesn't care much about them at first — he doesn't much care about anything at first — he gradually opens his heart to them as they get to know each other better.

The title, according to the author, comes from the Irish word for "family" (although "Clannad" is actually the name of an Irish band, an abbreviation of "Clann as Dobhar" or "the family from Dore") — and indeed family, along with the related concept of True Companions, is the major theme of CLANNAD.

The original Visual Novel was made by Key/Visual Arts and released on 28 April 2004. A sequel to one route, Tomoyo After, was released on 25 November 2005. The manga adaptation, illustrated by Juri Misaki, was published by Jive between November 2005 and March 2009; Drama CDs were released in 2007. In September 2007, Toei Animation released The Movie, directed by Osamu Dezaki – his final project, it turned out. The television series, produced by Kyoto Animation, aired from 4 October 2007 to 27 March 2008. The series was directed by Tatsuya Ishihara, and written by Fumihiko Shimo, with Kazumi Ikeda serving as character designer and chief animation director. The Visual Novel and the anime television series are each divided into two parts, the high school portion, which takes place during the first few weeks of Tomoya's senior year, and the After Story, which takes place later. Two special OVA episodes were made for this series. The first is the bonus episode 24 in the first season, "Another World: Tomoyo Arc", and the second the bonus episode on the final Clannad DVD, "Another World: Kyou Arc".

For those who care about such things: over at the Anime News Network, CLANNAD ~After Story~ (i.e. season two of the anime series) is currently ranked #3

among the almost 6000 anime series and movies listed there — at least if you go by Bayesian estimator.

And for several years, it also held the #1 spot in a similar listing at MyAnimeList.

Not that online polls are worth the paper they're (not) written on. Still. Interesting.)

Both seasons and the movie are licensed by Sentai Filmworks, the Spiritual Successor of the once-prosperous ADV Films – in fact, it was one of the first releases from the new company. The first two episodes are available online for free. Viewers in the U.S. can watch the subbed versions of both the first series

in their entirety on Hulu.

of the visual novel on Steam on November 23, 2015. This release was funded on Kickstarter here.

In November 2015, Key announced that Tomoyo After would be localized as well. The English Edition

Not to be confused with the Irish band of the same name (although they are the origin of the name).