These are the main and secondary characters who appear in the CLANNAD Anime and Visual Novel.

The protagonist of the series. Due to his habit of always arriving late to school, skipping classes during the day, and staying out all night, he has been labeled as a delinquent, or a young person who defies authority. Nevertheless, his actions end up changing everyone else's life for the better. 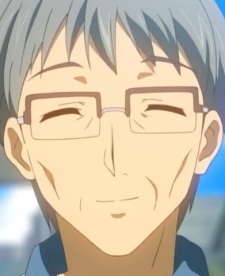 Tomoya's very emotionally troubled father. They had a falling out when Tomoya was in middle school, when he dislocated Tomoya's right shoulder. To stave off depression, he turned to heavy drinking (daily) and harder drugs (less daily).

The daughter of Nagisa and Tomoya present only in After Story.

Tomoya's grandmother, whom he meets when he and Ushio go on a road trip.

Nagisa is the main heroine of CLANNAD. A shy girl lacking in confidence, she meets Tomoya when she pauses (amid a sea of Cherry Blossoms) at the bottom of the hill, struggling to bring herself to continue on her way to school. Tomoya gives her some encouragement and eventually assists her in her dream of reestablishing the Drama Club.

In the anime, and in her route in the visual novel, she later becomes Tomoya's wife and mother to Ushio.

Nagisa's mother, who runs a bakery alongside her husband, Akio. Sanae is always trying to make new bread with unique properties (e.g. bread with rice crackers inside) although almost none of them turn out to be successful. She is very sensitive and cries easily especially when she is told her bread tastes bad.

Nagisa's dad. Although he often talks and plays rough, he is kind and sympathetic. His childish side makes it easy for people to befriend him. He runs the Furukawa Bakery with his wife Sanae. In his spare time, Akio plays baseball with children in the small park next to the bakery, and indulges in the Gundam fandom.

The loud and aggressive Class Representative of 3-E, Kyou has known both Tomoya and Sunohara since their junior year, when she was their classmate and class representative. As she is known for being overprotective of both Botan and her sister Ryou, she is known for literally throwing the book at Tomoya and Sunohara. She proved to be a very popular character in the anime, resulting in a spinoff episode that showed what would have happened if Tomoya had chosen her route instead of Nagisa's.

The younger and timid one of the Fujibayashi twins. Is the class representative of her room, but only won it through lottery rather then through actual voting. Is known for telling fortunes of anyone who asks her. Her fortunes are always complex and usually completely off the mark, though she can be eerily accurate at times. Though she is usually wrong, she believes that it would be better for the future not to be already set. She has a crush on Tomoya in the beginning and enlists Kyou's help, or rather, Kyou insists on helping her.

Kotomi is a very silent and strange girl: she has No Social Skills and is fearful and asocial. She squirrels herself away in the school library — she is always kneeling on the library floor, reading. Absorbing several pages of abstruse text per minute. Kotomi also likes to go barefoot in the library like it's her own home, almost instinctively removing her shoes and socks during her visits there. However, her footwear-doffing compulsion sometimes extends beyond the walls of the library- along with the urge to snip pages from books with scissors...

When Tomoya meets her, he manages to cut through some of her protective layers and socialize with her a bit, but each time he attempts to start up a conversation with her she won't notice him and respond unless he remembers to call her "Kotomi-chan". She has a deep-seated fear of bullies and a mysterious man in a black suit.

A beautiful strong-silent-type delinquent who has attained legendary status as a fighter. Tomoyo at first is a rough, cold-hearted girl who delivers the frustration of her messed up family that almost considered divorcing by fighting and hurting other people. That changed when her little brother Takafumi, in a desperate attempt to fix things up, either threw himself to the river or got himself into a car crash, ending up crippled and instantly mending the family and softening up Tomoyo. She later hears her brother's wish to see the sakura trees, and made it her mission to preserve those trees. She later attends Tomoya's school and starts out by driving out some delinquents threatening the school, and later spends her time trying to become the Student Council President (the only position where she can issue orders to preserve the sakura trees), while kicking Sunohara's butt whenever he pisses her off (and repeatedly). After much hardships and trials in winning the students' hearts and cleaning up her delinquent status, she is elected as the Student Council President, and continues to be friends with the one who helped her reach that status: Tomoya.

Tomoyo proves to be so wildly popular that she later gets selected as the protagonist of a special sequel which is the continuation of her visual novel story. Her route also gets animated in an Alternate Universe episode based on her Visual Novel route, where she dates Tomoya (whereas other girls don't seem to exist), but both became torn apart between their status and decided to move on to their own path, breaking up in result. When Tomoya finally graduates, Tomoyo waits for him and they tearfully reunite as lovers.

Tomoyo's little brother, Takafumi was the one who brought Tomoyo out her "delinquent" phase. Sometime in the past, the Sakagami family was in ruins because of their father's affair. In order to bring the family back together, Takafumi tries to drown himself (in the anime) or throws himself in front of a moving car (in the original materials). Predictably, this helps stop the family feud and Tomoyo begins to change her old ways, but this leaves Takafumi temporarily crippled.

His role and backstory is expanded in the Gaiden Game Tomoyo After, as a freeloader in Tomoya's apartment where Takafumi's sister frequents. It is revealed here that before his "accident", Takafumi was the ace of their track team. He had deeply admired his coach, who had a daughter named Kanako. Takafumi and Kanako fell in love and became a couple — however, Takafumi betrayed his coach (who had high hopes for the boy's talent) by willingly throwing himself into an accident and ultimately crippling himself in the process. This leaves the coach distraught and the couple estranged. At the present, Takafumi is presented as a Lazy Bum Gadgeteer Genius who freeloads at Tomoya's apartment and usually ends up roped into the occasional Zany Scheme. Oh, and then his ex Kanako returns to town.

A rather strange, short girl, who never seems to take classes and is often to be found sitting somewhere quiet carving wooden star shapes. A rumor about her being a ghost is floating about the school, and she has a tendency to force her carvings on any student she meets, requesting that in return they attend her elder sister's wedding and congratulate her. 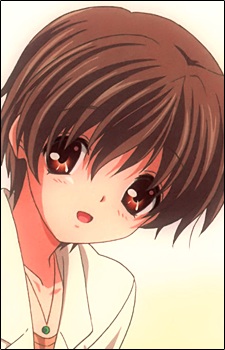 An art teacher until Nagisa's first senior year. She retired afterwards, and got married to Yuusuke Yoshino.

Tomoya's best buddy and fellow delinquent. Generally a loud Jerkass but dimwitted fellow. Makes for a great punching bag. Well, it tends to be kicks, really.

Landlady at the school's student dorm. Has her own mini-route in the game, wherein Tomoya falls in love with her after hanging out in her room whenever he has a chance.

Yukine is a second year student who hangs around in the library's reference room. The anime gives her out of school life an action packed Adaptation Expansion, replacing the reference room romance that makes up her visual novel route. 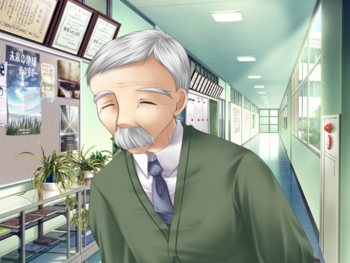 Senior teacher and one-time advisor of the Drama and Chorus Clubs. Booked the school for Kouko and Yuusuke's wedding. Officiated at Nagisa's "graduation" ceremony.

A boy Misae fell in love with when she was in her freshman year. 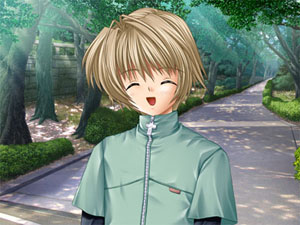 Voiced by: Ryoko Shiraishi (game only)

A young man who is traveling around. His goal in life is to "live like a man."

Girl from the Illusionary World 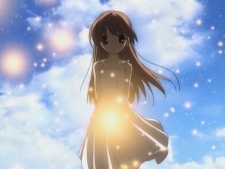 A young girl who lives along in the Illusionary World. She ends up building a doll that somehow becomes "alive" and lives as her companion.

She is actually Ushio Okazaki after her death, having lost her memories of her brief life with her father Tomoya. She regains them as she dies in the Illusionary World and she releases the light orbs for Tomoya to use so that he could save Nagisa, herself, and himself from their cursed fate. 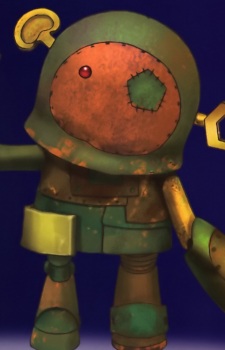 A doll built out of garbage by the girl in the Illusionary World. For reasons even he doesn't understand, he gains life and intelligence. He tries to help the girl out in her endeavors.

The doll is actually Tomoya Okazaki after his death, and after losing his memories of his life. When his daughter Ushio — his sole reason for going to the Illusionary World — dies there, he returns to the real world, having released the light orbs. The light orbs allow him to initiate a Time Skip wherein Nagisa survives giving birth to Ushio. After that, they all live happily ever after.