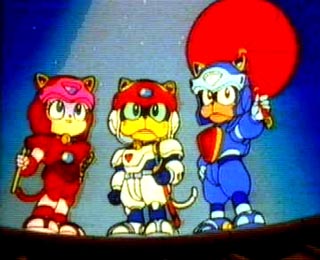 The token female of the group. Sports pink armor and mains a flute.

The manager of Little Tokyo's Pizza Cat restuaraunt and Mission Control that sends the Pizza Cats to their destination.

The Cavalry whenever the main trio needs help.

The main antagonist of the series, he is a corrupt prime minister who plots to overthrow the royal family on an episodic basis. He is also a frequent crossdresser.

Big Cheese and Jerry Atric's right hand man who acts as the field leader to the Ninja Crows.
The Rude Noise

A Quirky Miniboss Squad of ninja crows with custom-designed armor, sometimes employed by the Big Cheese to fight the Pizza Cats. One of their recurring themes is to use combination techniques to provide an uphill battle for the team.

Spoiled rabbit princess and daughter to Emperor Fred. Extremely short tempted and often sends those who offend her to Prisoner Island.

The object of Speedy and Guido's affections and whom they usually fight for. Stores a set of missiles in her hair that fire whenever her emotions get the best of her.

A perverted scientist who is responsible for giving the Pizza Cats access to the Supreme Catatonic, a Humongous Mecha used against larger enemy robots.

Mother and son extras who make color comments while watching the Pizza Cats fly over them.

Bad Bird's childhood girlfriend who performed as a clown at a traveling circus.

A mysterious warrior who Speedy faces while the latter trains for his rematch against Bad Bird.

A witty off-screen narrator who tells the story of the series. Often takes part in the hilarity.