Here we're going to list the characters introduced in Guilty Gear XX and its Updated Rereleases. 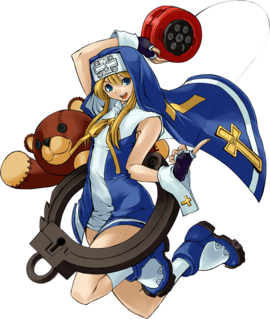 Voiced by: Hiroko Konishi (XX), Yukiko Kato (AC)
Roger voiced by: Akihiro Ishihara (XX-current)
Bridget is a (crossdressing) boy. In his hometown there is a superstition that if twins of the same gender are born, disaster will come. And because of that, baby Bridget was taken into the custody of the local convent's nun, then raised as a girl (well, it was that or having him killed off). He works as a bounty hunter to prove his manliness and that he isn't bad luck. Why he continues to dress like a girl when he wants to prove his manliness is unclear.
In-game, Bridget is a runaway fighter who excels at keeping his distance with extreme mobility and harassing opponents with his long-range pokes. He can deploy his Killer Yo-Yo, which can be manipulated to travel across the screen in order to force spacing. On the other hand, he has the lowest effective health among the cast (in games that he shows up) and overall low damage output.
Slayer 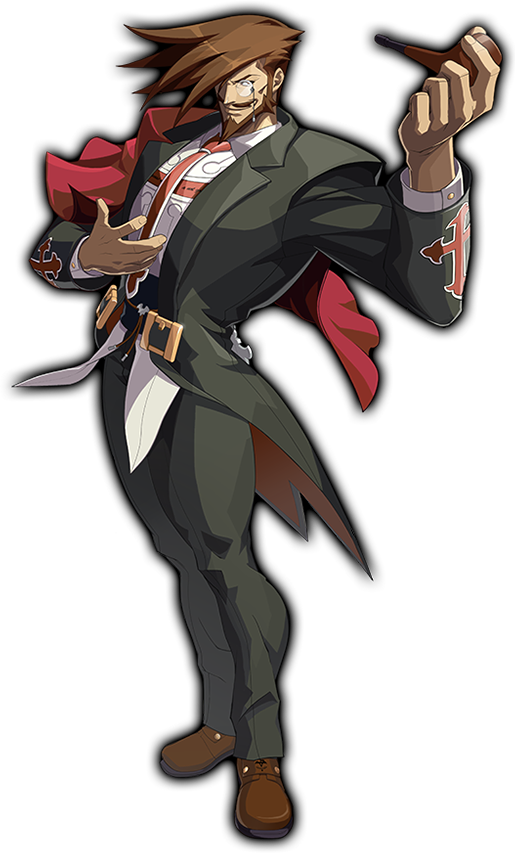 Voiced by: Iemasa Kayumi (XX-Xrd -SIGN-, JP), Takaya Hashi (-REVELATOR- onward, JP) / JB Blanc (EN)
A powerful Nightwalker who seems to be the only one who knows exactly what the hell is going on. He visits many characters and gives them valuable hints. He was the original founder of the Assassins' Guild, and his main objective is to disband it because it became corrupted from his original intentions. He is married to an immortal Lady in Red named Sharon, who is completely immune to anything, even parasites like Eddie (In fact, it is shown in Eddie's 1st ending in XX that upon making contact with her, he melts away into nothingness).
Confirmed as a returning character for Xrd. One day, Slayer receives information from a confidante, who did not survive gathering their intel, regarding the Senate's involvement with Faust's past as Dr. Baldhead and the resurrection of Zato-1. His curiosity piqued, he once again makes his appearance in the human world to find out more.
In-game, Slayer fights exclusively at close quarters, jabbing away at the opponent with small pokes and mix-ups until he can punish mistakes with hard-hitting counter hits and combos. He has a unique Teleport Dash which moves him at set distances and his iconic Dandy Step, a unique move that slides him backward out of danger and can followup into one of several other attacks. He struggles against ranged opponents due to his non-standard movement and lack of true projectile attacks, along with having limited pressure which forces him to rely on very hard reads for effective punishes.
Zappa 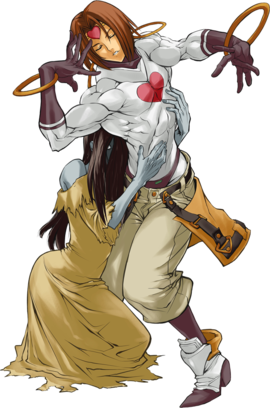 Voiced by: Yuji Ueda
A seemingly normal man who is actually possessed by several spirits. He seeks to find Faust so he can cure his ailment. In XX he finds Faust, who tells him that he doesn't know what to do about it and suggests that he train himself to control the blackouts. In Accent Core + , he encounters Faust again, who finally concludes that Zappa is possessed after seeing S-ko for the first time. Faust purges the ghosts from Zappa, and he thanks Faust for his help.
Zappa returns as a Story Mode NPC in -REVELATOR-, now sporting a brand-new look, as shown here

◊. Apparently he has made peace with the spirits within him, and now works alongside Dr. Paradigm.
In games where he is playable, Zappa's game-play revolves around the use of several spirit summons, which he can (almost) randomly call one of them into himself and change his moveset. Each summon has a specific niche, meaning the player will practically have to learn several characters at once instead of just one, on top of having to deal with the inability to reliably pick which summon he gets. Landing a special attack with his summon out also nets Zappa an orb, which can be used to call down the very powerful summon Raoh for a period of time once he has 8 of them.
I-No

"I won't break you. Yet. I haven't told you how unfortunate it is that you were born at all, right?"

Voiced by: Kikuko Inoue (JP), Tara Platt (EN)
The mysterious servant of That Man. Putting it simply, she is the embodiment of the word "bitch". And she loves it. As she serves That Man, she also knows Sol and she hates his guts, mostly because he's one of the few people able to defeat her. In XX, she goes around causing heaps of trouble for the other characters. In Accent Core + , after an encounter with Sol she transports him back in time to fight his past self, Order-Sol.
Confirmed as a returning character for Xrd. Some things never change, and I-no's love of causing mischief throughout time certainly has not. Time-jumping has given her knowledge of Ramlethal Valentine's appearance, and now with "That Man" being involved, her interests have been piqued, and she once again decides to take the stage.
I-no is a rushdown character centered around her excellent aerial mobility and mix-up game. Her unique hover-dash can get her airborne without needing to jump, and her varied moveset allows for highly oppressive fake-outs and pressure until the opponent fails to defend. However due to her mediocre normal attacks and non-standard movement, she has difficulty in getting past enemy neutral attacks and starting her offense. 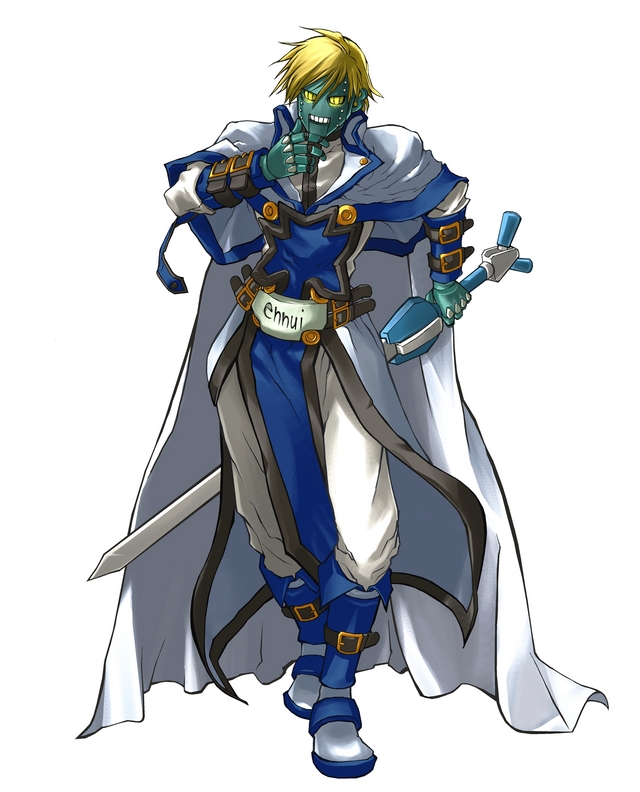 Voiced by: Kantaro (XX#Reload Battle Voice), Takeshi Kusao (XX Story Voice), Takumi Inoue (AC), Shigeru Chiba (-REVELATOR-)
Robo-Ky Mk. II voiced by: Yutaka Terada
The robot impersonator of Ky created by the PWAB. There are several of these things floating around. Also has a MK-II version which copies his opponents' moves. One unique version appears in Accent Core with a lecherous personality.
The very last one returns as a Story Mode NPC in -REVELATOR-.
In games where he is playable, Roko-Ky is a versatile character held back by the need to constantly maintain two resources which replace the standard Tension meter: Heat and Power. Both of them are slowly generated by performing attacks and doing specific special moves respectively, both of which give Roko-Ky's attacks better properties at higher levels. But be warned; too much Heat will cause Robo-Ky to explode, harming himself and the opponent if they're too close.

Slayer's immortal wife who is always seen to be accompanying him. Apparently, she isn't a vampire. 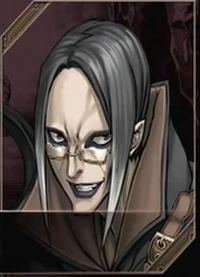 An amoral scientist who works for the PWAB. He has a connection with Johnny. He meddles with many of the characters by making Justice clones and having them fight. He is apparently a traitor to the Japanese people according to Anji, Baiken and Faust. 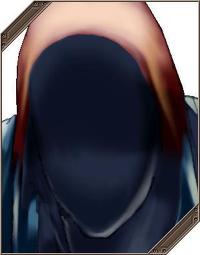 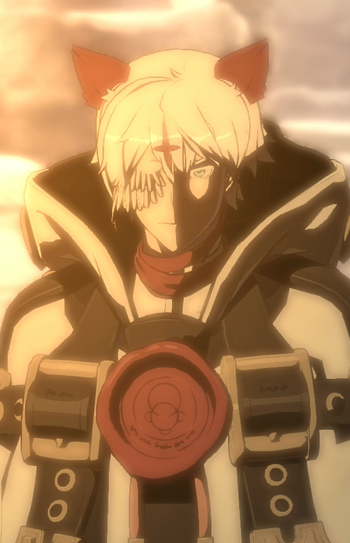 One of the lead scientists on the Gear Project alongside Sol Badguy / Frederick Bulsara and a female researcher named Aria Hale. Like Sol, he wishes to atone for the gears he created going on a Kill All Humans rampage. But unlike Sol, who decided to hunt down the gears, he chose to pursue another, mysterious goal by manipulating events from the shadows.

As the one of the co-creators of the Gears, he has a deep connection with Sol and Justice, and has become a target of multiple other characters in the series like Baiken, Anji, and Axl Low for the destruction his creations wrought. He also has multiple agents carrying out his various agendas, including the immortal Raven, the witch I-no, and the gear Jack-O'.

He is first mentioned in Missing Link, where Justice reveals to Ky that "Even if I die, the Gears will not! As long as that man... still... lives..." However, he only appears in earnest in XX, where he reveals himself to Sol after I-no's defeat, invites Anji to join him in "the betterment of the world", and other cryptic actions.

Overture and Xrd however reveal his true name and motives: The Gear Maker, a.k.a. Asuka R. Kreutz, had in fact lost control of his creations to a third party that dubbed itself "The Universal Will". Seeking to destroy humanity for their perceived imperfections, the Will brainwashed the gears to serve as its puppets, leading to the destruction of Japan and the century long Crusades. Asuka, meanwhile, has made it his life mission to release the gears from other's control, and create a world where humans and gears can at last co-exist as equals, no matter what methods he must resort to.