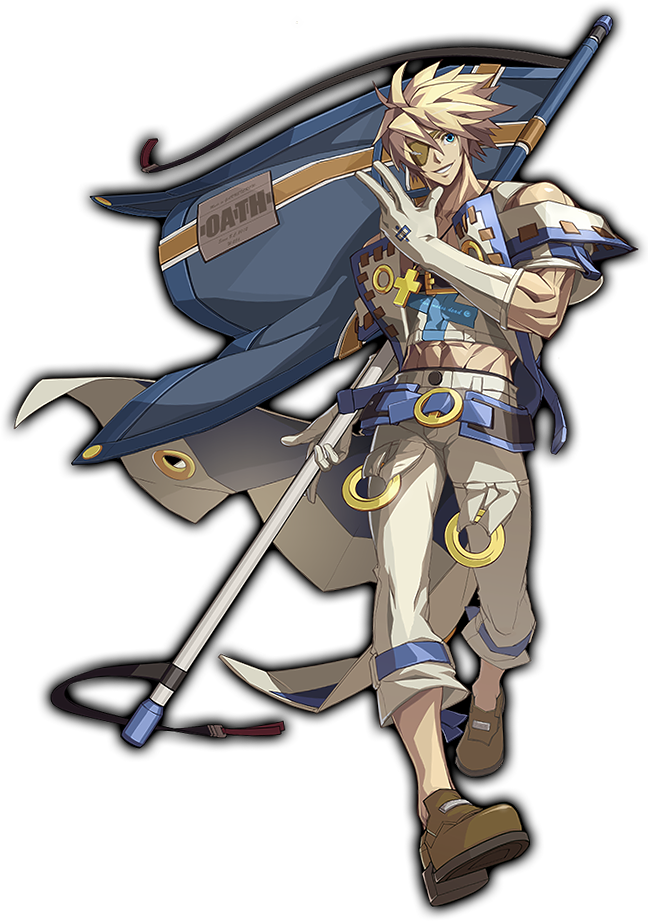 "Of course! My heart always has, and always will be, open to all!"

Voiced by: Issei Miyazaki / Yuri Lowenthal (Overture, EN), Lucien Dodge (Xrd, EN)
Sol's student and the illegitimate son of Ky Kiske and The Maiden of the Grove, a Gear woman who was recently confirmed to be Dizzy. He travels with Sol due to his Gear nature, which makes him an easy outcast. Sol is more of a father figure to him than anyone else, even his biological father, Ky. Sin deeply resents and hates his father for not being there for him after he was crowned King of Illyria. Ky gave him very little, if any, attention, making their relationship very distant. All of the attention was given to him by his mother, Dizzy. Because of his very fast growth rate, he was placed in Sol's care for the discovery of his existence will endanger his life.
Since he was raised under Sol (and no thanks to his surprisingly young age), Sin is very hotheaded and charges into things without a second thought. This trait ends up getting him kidnapped and brainwashed by Valentine to serve her. The brainwashing fuels his desire to surpass his master, and increases his rage towards Ky. He is eventually beaten out of his condition by Sol, and continues to fight Valentine's Justice form. When Valentine attempts to self-destruct the gate to the Backyard, Sin is forced outside the gate by Sol. After the End, it's shown that he's now trying to mend the broken relationship with his father while awaiting for the recovery of his mother, deciding to take it slowly and continue to train under Sol.
Sin returned in Xrd as a console-exclusive playable character, making his debut in the fighting games proper. His appearance here is defined by his strong ground neutral game with myriad of powerful long-range pokes and decent anti-airs. He consumes unique calories meter for his special attacks, which he must occasionally stops to refill by eating meat, or else he is rendered temporary immobile when the meter is empty. His rushdown-footsie playstyle is simple to execute, but his limited Gatling Combo paths can be rather predictable.
Izuna 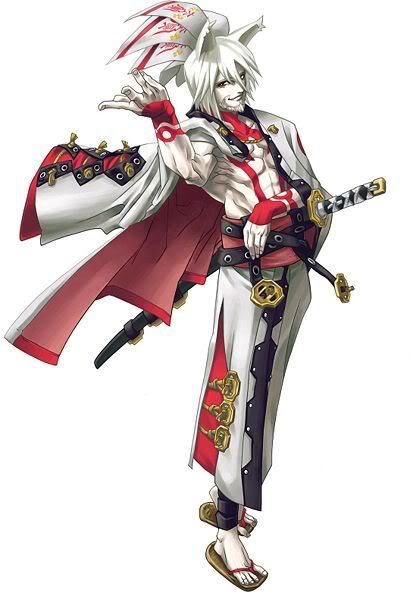 "A person who won’t fight when a friend is in need is not a coward. There's a different word for that...A Chicken Breast! And I am no chicken breast, sir!"

Voiced by: Toru Furusawa / Dave Wittenberg
A jovial fox spirit created in the Backyard. He lives in (and was previously exiled to) a pocket dimension of the Backyard called the "Yomotsu Hirasaka" or Underworld Hill in English. He first appears to Sol and Sin when they are first attacked by Valentine's servants. Izuna doesn't usually fight, but then reveals that he can fight perfectly well and has much knowledge of magic, much to Sol's annoyance. Like Anji, he appears to be fond of getting information.
Dr. Paradigm 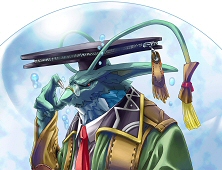 "I am a dragon, sir, not a bird. As this is a time of crisis I will let your insult pass, but I hope not to see you make the same mistake in the future!"

Voiced by: Yuji Mikimoto / Michael McConnohie
The leader of a group of animal-type Gears on a remote island called Ganymede. Paradigm is a bird dragon-like Gear who is a brilliant strategist and tactician who also has an immense knowledge of magic. He hates humans at first for their treatment of Gears, but then realizes that not all Humans Are Bastards when he allies with Ky, who makes him the ambassador for Gears in the end.
He's currently trying to figure out how to break the seal on Dizzy. He ultimately succeeds, which allows Dizzy to join the cast.
Valentine 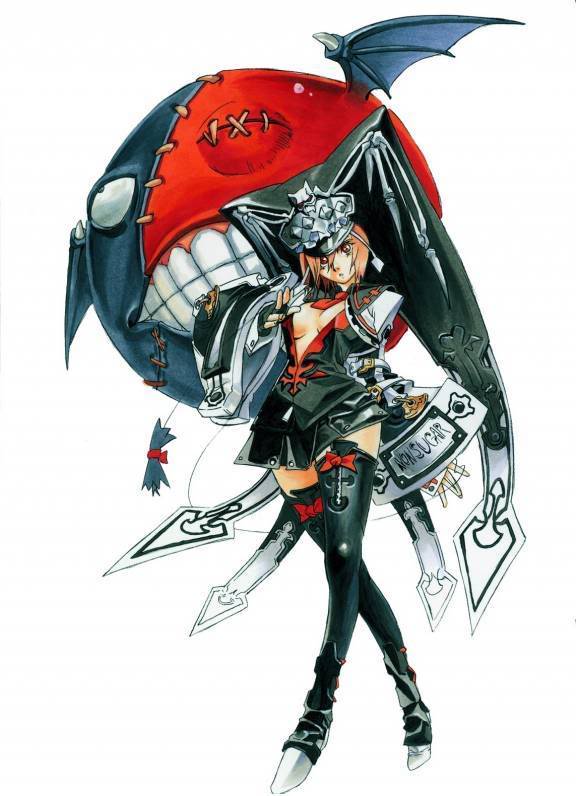 "Why is it? I don't get it. Can I not perform well unless I understand 'feelings'?"

Voiced by: Chie Sawaguchi / Wendee Lee
The Antagonist of Guilty Gear 2: Overture. She is obsessed with obtaining a certain "Key" that will allow her to enter the Backyard and cause the undoing of the universe. She is completely emotionless, and has eerily robotic mannerisms. She kidnaps and brainwashes Sin for a short period before extracting his DNA, and enters the Backyard. Sol stops the process of the Key turning by destroying it, which causes her to feel her first emotion: PISSED OFF. After her transformations Sol kills her, but not before realizing that she is a clone of Aria, Sol's previous lover.
Raven 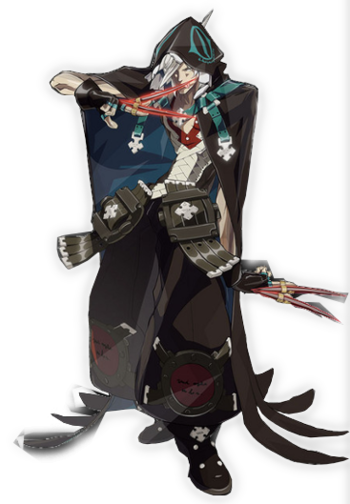 Voiced by: Hiroki Yasumoto / Jamieson Price (Overture, ENG)
Raven is one of the mysterious allies of That Man. He is proficient in dimensional magic, and is also extremely sadomasochistic. He enjoys both causing and receiving pain immensely, even going so far as to charge headlong into attacks just for the stimulation.
The 10th Memorial Book reveals that Raven is of German descent, and that he is a "natural immortal" due to a genetic anomaly. He was an accomplished warrior during the 12th century and took part in many battles of the Crusades. His first death occurred in an attempt to retake Jerusalem. The enemy had anticipated their moves and slaughtered all of his comrades, except him. Raven was shot with arrows and stabbed repeatedly, but instead of dying he found himself trapped within a strange cylindrical space surrounded by predatory birds. The sensation of their stares boring into him soon became the sensation of thousands of needles piercing his body. And so Raven survived, continuing to linger on for 2,000 years. He grew bored with life, and one day drove a spike into his forehead out of despair. That spike remains bored through his skull to this day. That Man approached him not long afterward, and made him an offer to become "a witness to history". Raven had, at long last, found a purpose in his eternal life, and accepted That Man's offer.
Originally a DLC character for Overture, he later appears as an Arcade Mode NPC

in -REVELATOR-, seeking the assistance of Sol's group in order to search for That Man after he had been captured by Bedman. The mantle that he wore in Overture has been changed into a full-on hooded cloak, and he no longer wears a mask. His skin is no longer a pale blue or silver as it was in previous games, having now returned to a more natural color, and his right eye no longer glows blue.
On February 16, 2016, He was confirmed by Famitsu as a playable character in the console version of -REVELATOR-, being a straightforward offensive character with good reach and speed, alongside unique gliding air dash that also acts as near ground-sweeping attack. He has a gameplay mechanic in Excitement gauge that is filled by taking damage while performing a particular stance Give it to me HERE. Doing so upgrades the properties of other special attacks, such as hit counts, startup speed or damage. In turn, he has relatively slow normal attacks.