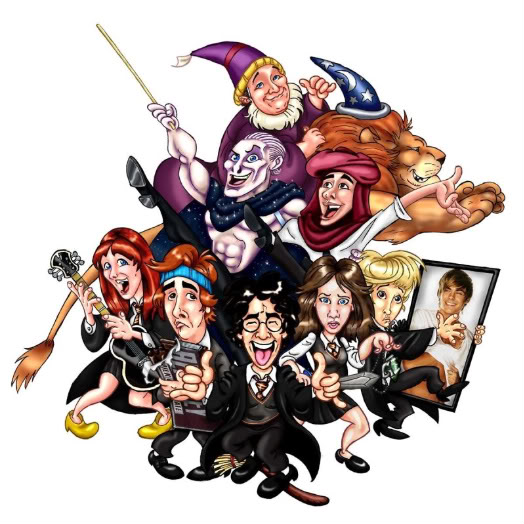 A Very Potter Musical (performed and later released in 2009) begins with Harry's second year at Hogwarts. Professor Quirrell, the new Defence Against the Dark Arts teacher, reinstates the House Cup Tournament, and a champion from each House is chosen to compete. But when Voldemort uses the tournament to fulfill a plot to return to his body, things take a turn for the grim for Harry and his friends, who must find and destroy Voldemort's Horcruxes before it's too late. The story takes most of its elements from books 1, 4, 6, and 7.

A Very Potter Sequel (performed and released in 2010 after the video of the show was first premiered at Infinitus, a Harry Potter convention) begins immediately after the events of the first story, when Lucius Malfoy decides to use a time turner to go back to Harry's first year at Hogwarts and kill him before he can defeat Voldemort. As Harry, Ron, Hermione, Malfoy and the rest of the characters meet for the first time, Sirius Black escapes from Azkaban and the Ministry of Magic responds by sending Dolores Umbridge to the school to watch out for Harry, and Remus Lupin also comes to Hogwarts to take up the job of Defense Against the Dark Arts teacher. Its story is mostly from books 1, 3, and 5.

. Though a full scale production couldn't be rehearsed and performed, a reading of the script featuring music, costumes, basic props, staging, choreography, a narrator (who describes settings and other visual elements the team wasn't able to put together) and a huge cast of Team StarKid actors was presented at LeakyCon 2012. In other words, they did everything they could to make it as much of a full scale production as they could, and succeeded. The script, soundtrack, and video of the reading were released in December 2012, while the play itself was released in 2013. Borrowing mostly from books 2, 6, and 7, the story is about Harry's seventh and final year at Hogwarts.