"With imagination, I can be anything I want!" 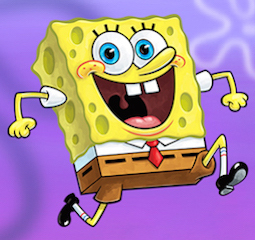 An outgoing sea sponge who lives in a pineapple under the sea, as the show's Theme Tune implies. He works as a fry cook at the Krusty Krab. Although naïve, he has a good heart and constantly strives to help his friends... even when they don't really want it.