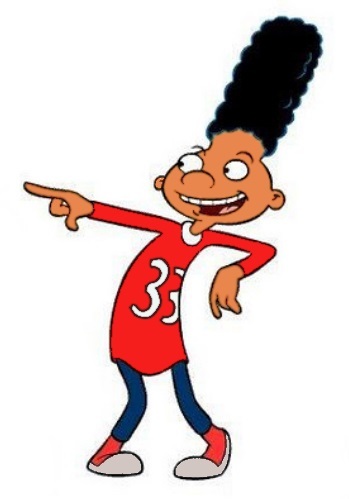 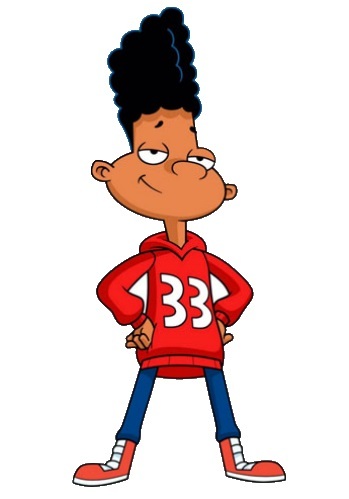 Best friend to Arnold and often serves as the storyteller of the group. He was the Deuteragonist of the series and the Tritagonist of the last series of "The Jungle Movie" 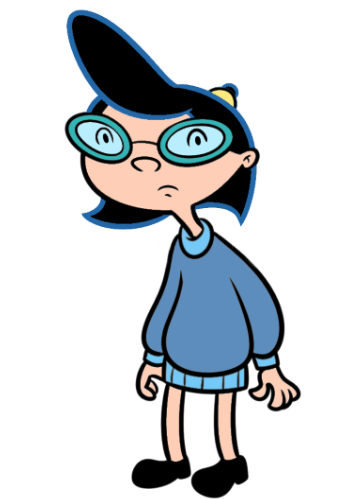 "Forgetting!"
Phoebe as she appears in The Jungle Movie 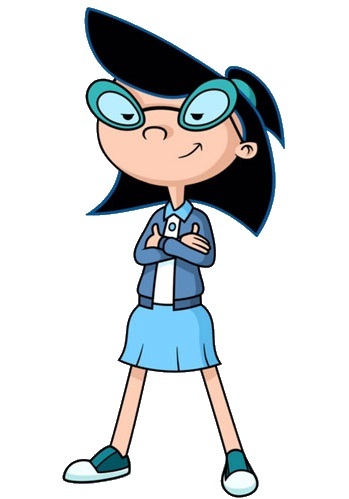 Best friend of Helga. Half-Japanese girl who was born in Kentucky but moved to the city at a very young age. She strives to be the top of her class. 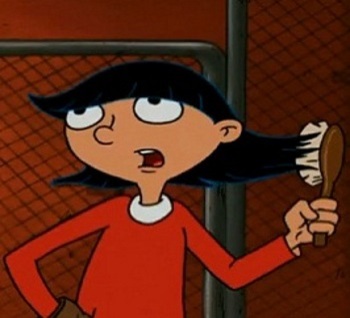 One of the most popular kids in school and self-proclaimed "fashion queen", Rhonda is spoiled, rich, obsessed with fashion, and a bit of a snob, but she does have a friendly side that comes out quite often. Her best friend is Nadine, but she's often seen hanging out with Arnold and the gang. It's implied that she and Harold like each other, and Curly likes her too... much to her chagrin. She's also a surprisingly good football player. 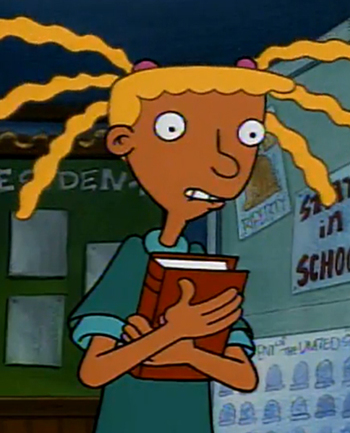 "[Insects] are practically our landlords!"
Nadine as she appears in The Jungle Movie 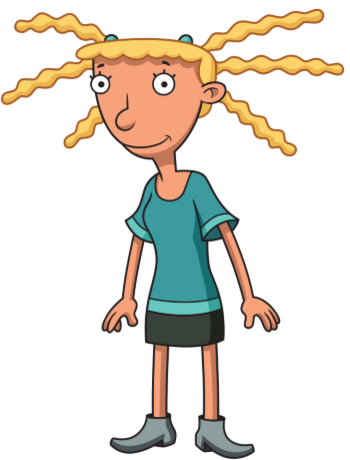 Nadine is Rhonda's best friend, even though they couldn't be more different. She is fascinated by bugs and arachnids. 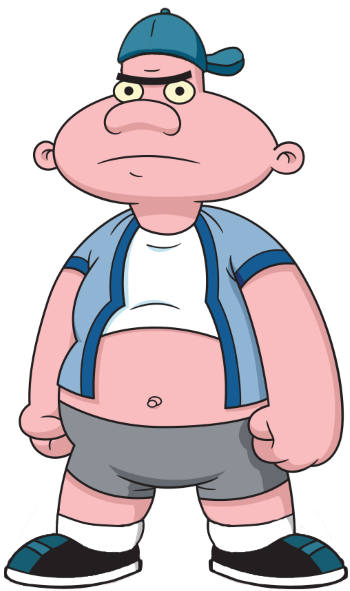 Harold is an overweight and immature 13-year old 4th grader who was a one-dimensional bully until Arnold showed him his sensitive side. He is known for slacking off and an incredible appetite, but he is very much a softie and a Mama's Boy. Harold is also Jewish and eventually finds himself trying to embrace his heritage. 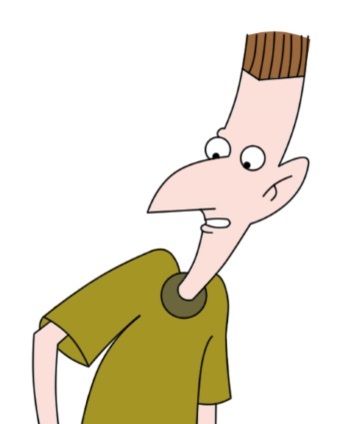 "This really bites"
Stinky as he appears in The Jungle Movie

A kid with a thick Southern accent. He comes from a rural background and his family doesn't have a lot of wealth. Stinky is often seen palling around with Sid. 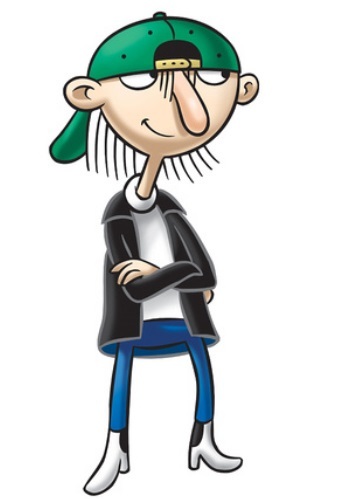 "Boy howdy!"
Sid as he appears in The Jungle Movie

A paranoid boy in a hat. He tries to act cool and dress snazzy, and is very much on the up-and-up on the rumor mill, but Sid's habit of freaking out at the slightest provocation and blowing nearly everything out of proportion often leads to a lot of chaos. He and Stinky tend to hang around together. 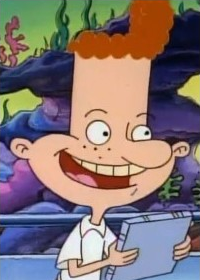 "I'm okay!"
Eugene as he appears in The Jungle Movie

An extremely unlucky kid, who gets injured a lot and often shunned by the other children- mostly because they're afraid his bad luck is contagious. Arnold is the only one who treats him as an equal and continually tries prove he doesn't have bad luck, with very mixed results. 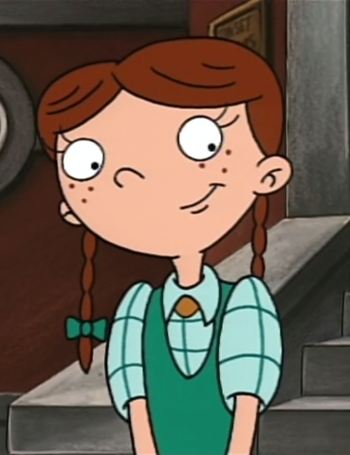 "It's not easy being perfect..."
Voiced by: Ashley Buccille

A poor country girl who transfers to the school in season 2. She tries to be a model example of kindness, but sometimes forces herself to act that way to get a pat on the back.

Psychotic kid with black hair and glasses. Absolutely maniacal and liable to go berserk if given the opportunity. 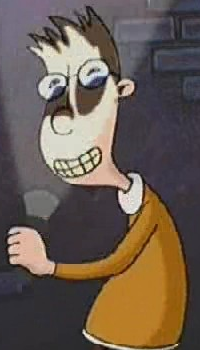 An otherwise taciturn mouth-breathing nerd who seems to have a thing for Helga. He often creeps up on her during her speeches of praising Arnold, and can be recognized by his telltale mouth-breathing wheezing heavily in the background. Helga almost always resorts to punching him (usually smashing his glasses in the process). 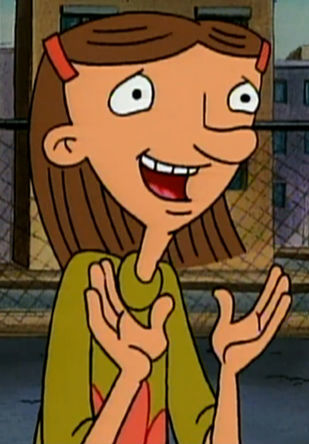 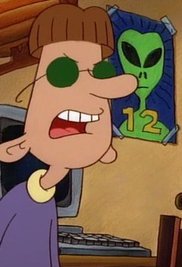 One of Arnold's friends and popular classmate. Later revealed to have a skeleton in the closet, leading to infamy. Lots of infamy. 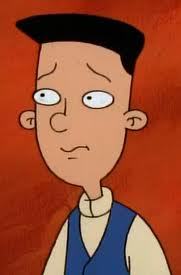 A wealthy student who's a little too mature for his age. 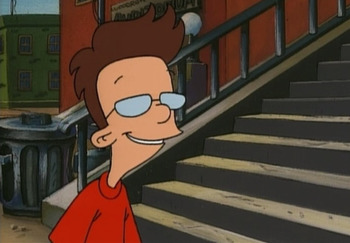 A kid who dressed up as a peapod in Helga's food play. 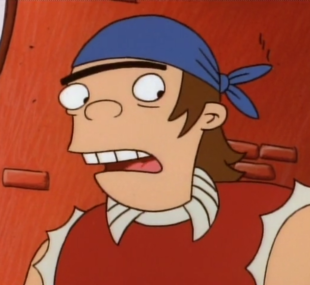 A 13-year-old bully who has been held back several years.