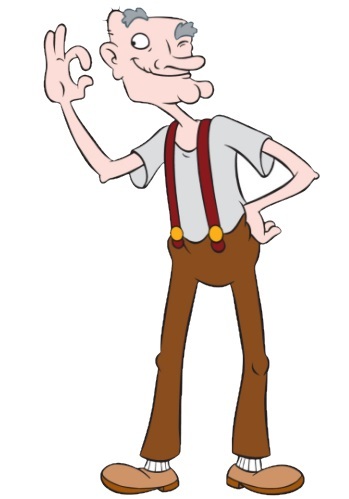 "Never Eat Raspberries"
Phil as he appears in The Jungle Movie

Arnold's paternal grandfather/Parental Substitute. Runs the Sunset Arms boarding house and has a checkered past. 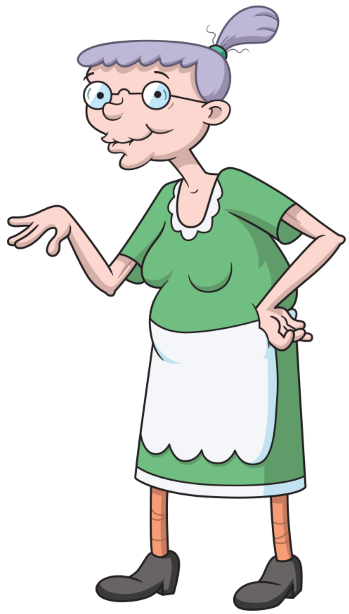 "Always stay down end of your prize, carry plenty of ammo and eat everything you kill!"
Voiced by:
Tress MacNeille
Francesca Marie Smith (young Gertie in "Girl Trouble") 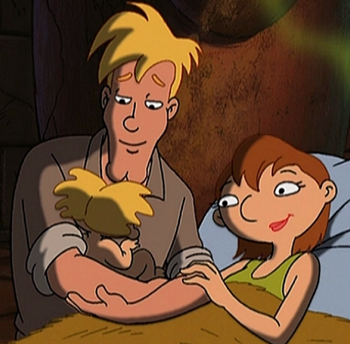 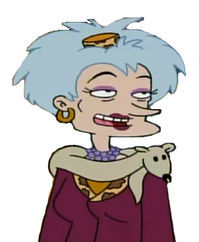 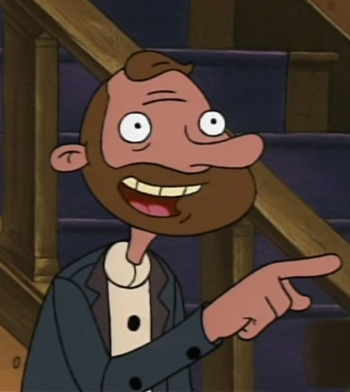 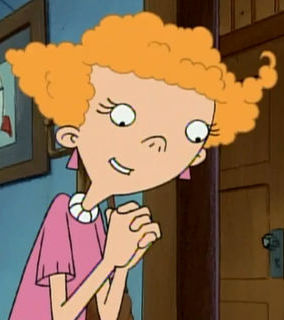 Oskar's loving wife who puts up with his laziness. 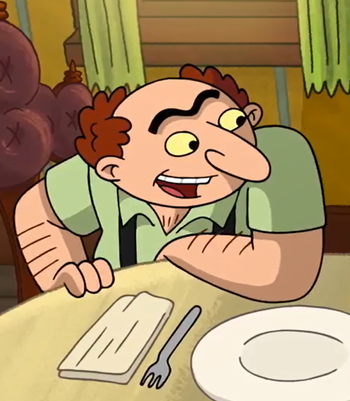 A short man who works as a demolition expert. 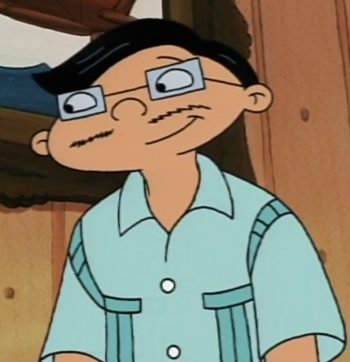 An immigrant from Vietnam and a pretty nice guy. Works as a chef at a Mexican restaurant and loves to sing and play music.

A mysterious member of the boarding house, only appearing in Season 1. A “very private person” Mr. Smith never makes an appearance in full and exits the show halfway through the first season.
Pataki Family
Big Bob 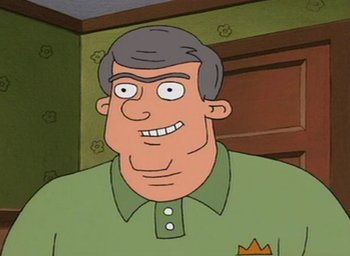 "This never would've happened to Olga"
Voiced by: Maurice LaMarche 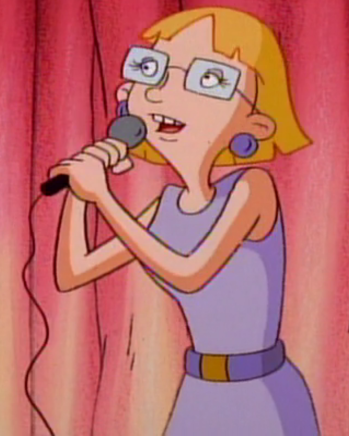 "I need a smoothie."
Voiced by: Kath Soucie

Mother of Helga and Olga, Miriam is a depressed, constantly sleepy, seemingly ditzy housewife with an addiction to "smoothies" (Word of God confirms that all of these are signs that Miriam is an alcoholic, with "smoothies" as a cover-up for booze). It's not uncommon to find her sleeping in strange places. However, she can be very competent and intelligent, but unfortunately it seems that being married to Big Bob has really brought her down. 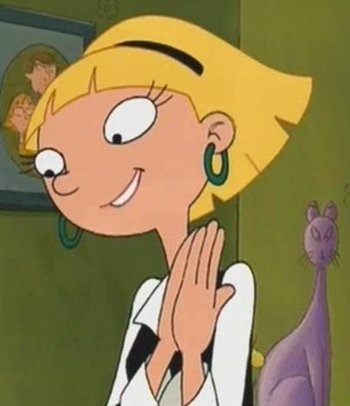 "Lila may be my little sis, but she'll never be my baby sister"
Voiced by: Nika Futterman
"You must think I'm lucky. All the attention I get from them? I have to perform all the time like some kind of wind-up doll. I get really sick of it. You're lucky they don't even notice you."

Helga's older sister and the parental favorite, much to Helga's dismay (and Olga's too, as revealed in "Olga Comes Home"). At first glance, Olga appears perhaps too perfect: Successful, pretty, smart, and sweet and kind to everyone. But she's actually dangerously neurotic, melodramatic and out of reality, due to having to constantly live up to her parents' (well, her father's, anyway) constant attention and ridiculously high standards. 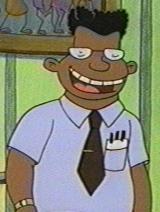 The father of Gerald, Jamie O and Timberly. A businessman who once served in the military during the Vietnam war.

The mother of Gerald, Jamie O and Timberly. Works as a cashier at a grocery store. 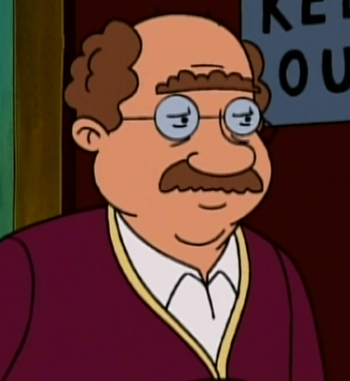 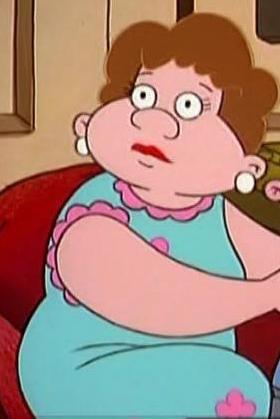 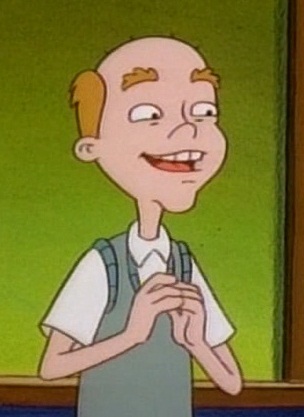 Fourth grade teacher at P.S. 118 starting in the second season, replacing the original Living Prop, Miss Slovak. Thinks of everyone and everything as "special". As of The Jungle Movie, he also went on to become the class's fifth grade teacher. 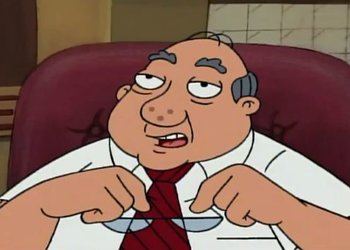 As you may have guessed, he's the principal of P.S. 118 and he's known to be harsh but has reasons to be. Throughout the show, Wartz often is seen taken punishments too far, even by following teachers but he has toned this down after realizing when he sees how the others handle order. 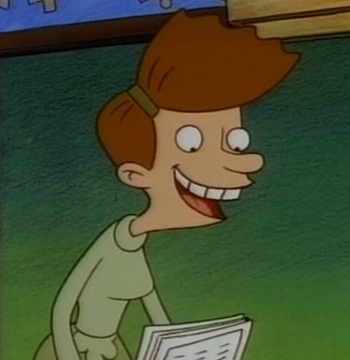 The original teacher of Arnold's class. She was replaced by Mr. Simmons in Season 2. 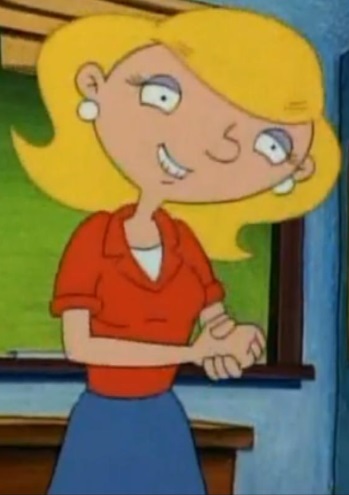 A substitute teacher that Arnold has a crush on in "Crush on Teacher".